Dean Graziano isn’t a huge fan of the “Uber for X” moniker that many on-demand marketplace services label themselves with. But as he described his company’s new live streaming video app last week in Seattle, Graziano said it fits perfectly.

“I hate using that because everyone does,” he said. “But this is really the Uber for video.”

Graziano, who previously led Seattle-area startups like Lively and Visible Technologies, is on to his next project: uZoom.

Originally founded by digital media vet Martin Rincon, uZoom is a marketplace for live streaming video, connecting people who want to see something in the world with those on the ground that are actually there.

“The idea is basically, I can’t physically be some place, but I want to see something,” explained Graziano, the company’s CEO. “Someone else is there, and for a nominal fee, they will live stream it to me.”

Streaming live video is reaching mainstream users more and more with the likes of Facebook Live and Periscope — CSPAN even used the technology to broadcast the recent House sit-in protest, using feeds filmed by representatives in Washington D.C.

But Graziano explained that while tools like Facebook Live and Periscope are gaining popularity as our smartphones and streaming technology improve, uZoom is more focused on one-to-one communication, versus one-to-many. He called it “purpose-driven.” 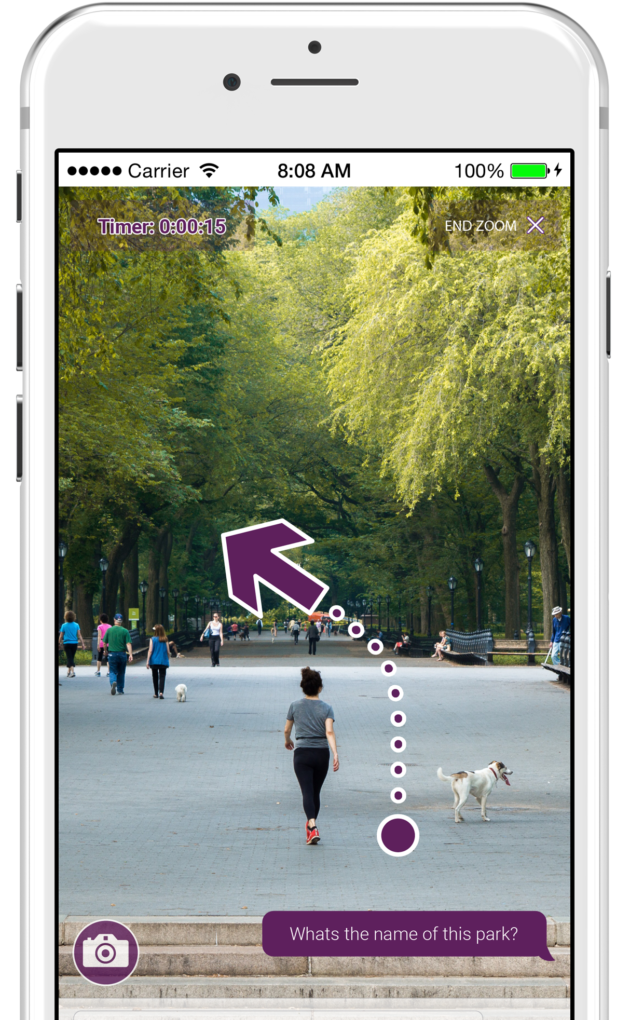 “We believe the next iteration of video is viewer-controlled,” he said.

The app’s functionality is fairly simple, allowing users to find “Zoomers” that are on the ground at a requested location and available to stream. uZoom opens a chat communication between the two, and once the “Zoomer” is ready, he or she will start streaming. The person paying for the stream can speak or use gesture controls to direct the “Zoomer” around. They can take photos of the stream to save for later.

“Zoomers” make 60 cents per minute plus tips, with 20 percent of the payment going to uZoom.

The use cases for uZoom are “endless,” Graziano added. For example, maybe a father is going to miss his son’s championship soccer match and doesn’t know anyone who will be there watching.

“But he knows the school where his son is playing, and he can use uZoom to ask someone to stream it,” Graziano said. “And he’s willing to pay for it because it’s his kids game.”

There are also applications for news gathering; for commerce; and for the greater good/non-profit space — “this has a ginormous micro-financing international play, which we’re really interested in,” Graziano noted.

Or, as the promo video shows below, perhaps you want to someone to show you a live-stream of a potential travel destination before making a reservation.

“Ultimately, we are a hammer. We sit in the middle,” Graziano said. “We’ll take our platform fee and let people do what they want.”

uZoom, which previously reeled in a $560,000 seed round led by Broadmark Capital and is currently raising its Series A, is having an official launch in Brazil this August during the Summer Olympics. “Zoomers” will be on the ground in Rio de Janeiro, streaming from a bevy of locations — rugby competitions, late night festivities, etc. — to give viewers an alternate method to watch the action outside of NBC’s televised broadcast and other live streams from Facebook, Periscope, etc.

“We’re turning them into tour guides,” Graziano said of the ‘Zoomers’ in Rio.

Graziano is bullish about uZoom, which employs 13 people. The startup vet, who has had his share of both successes and failures as a long-time entrepreneur, said opportunities like uZoom “don’t come around very often.”

“As Jack Dorsey says, it’s extremely complex to create something simple,” Graziano said, quoting the Twitter founder. “That’s what we’ve done with uZoom and that’s what I get really excited about.”