Students across the country are headed back to school and many high school seniors are deciding which college or university would be best for them. Those with entrepreneurial ambitions might want to consider a new list from Seattle investment site Pitchbook, which ranked universities based on the venture capital cash raised by startups that came out of them. 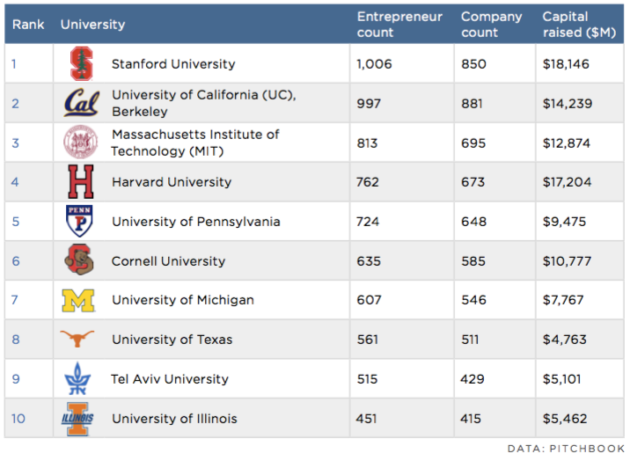 The list ranks universities, based on the number of entrepreneurs they graduated and the amount of VC cash their startups raked in, between 2006 and 2015.

Unsurprisingly, Stanford dominated in most categories. Top companies to come out of the West Coast’s answer to the Ivy League were Snapchat, Solyndra, SunRun, Flipboard, and Okta. The university’s proximity to Silicon Valley and its academic reputation give it distinct advantages. The Bay Area’s University of California Berkeley scored high for the same reasons.

These advantages extend to top-ranking universities across the U.S., as Pitchbook notes:

Those winners — in terms of entrepreneur production, of course — already benefit from geographic proximity to major sources of capital, well-regarded business schools, deeply rooted monoliths in certain industries, etc. Such incumbent advantages are hard to beat, which is one reason why there has been precisely no fluctuation in the ranking of the top 10 university undergraduate programs between this year’s installment and the last, although the actual figures have varied considerably.

Despite its proximity to Seattle’s vibrant tech scene, the University of Washington ranked considerably lower at No. 23. The UW’s status may be a reflection of Seattle’s lukewarm venture capital scene, as compared to Silicon Valley.

Pitchbook also ranked the top 25 VC-backed graduates of MBA programs. In that list, Harvard beat out Stanford. It graduated 1,069 entrepreneurs who raised a total of $22.4 billion.

Stanford, Harvard, and Yale produced the most undergraduates to found “unicorns,” or startups with valuations of $1 billion or higher. Pitchbook notes that connections fostered within tightly-knit Ivy League communities often help entrepreneurs get a foot in the door at investor meetings.

But that advantage can only get startups so far. Five of the top 10 universities graduating the most VC-backed entrepreneurs were public schools. Groupon, Twilio, and 23andMe are among the companies founded by public school grads.