Given the company’s partnership with The Masters and its Watson artificial intelligence platform, it was only a matter of time before IBM partnered with Tom Watson.

For this year’s annual golf competition at Augusta National Golf Club, IBM — the official technology partner of the Masters — is teaming up with the golf legend as he competes in his final Masters tournament. 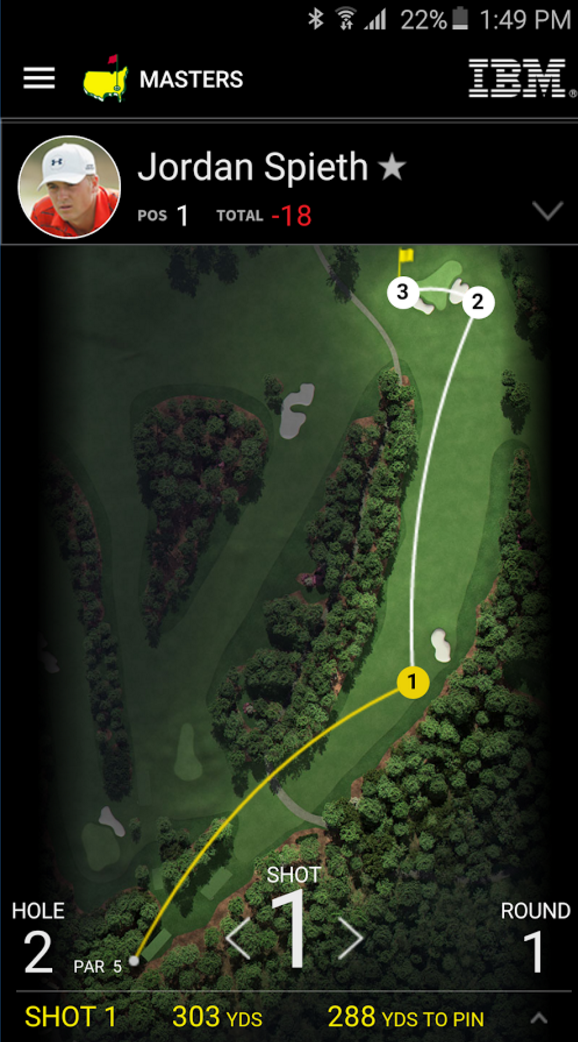 IBM Watson, the company’s cognitive technology platform, will be spotlighted in new advertisements that run this week which feature an analysis of Tom Watson’s Masters performance through the years. The idea is to show golf fans how IBM’s technology can be used to garner deep insights from on-the-course performance.

Augusta National officials will also use a “Watson Social Media Command Center” to measure trends from social media about the tournament to identify popular topics that fans are chatting about.

IBM, which is celebrating its 20th year partnering with The Masters and also does similar work for the U.S. Open, is also rolling out an Apple Watch and Android Wear app for fans to track the action this weekend from their wrists. The smartwatch app will feature a leaderboard, player details, and other real-time data.

For the first time, the smartphone apps (iOS and Android for smartphone and tablets) this year will include IBM’s Track feature, which utilizes lasers set up on each fairway and green at Augusta that track the position of a player’s ball. This real-time data is funneled into an aerial map of each hole that lets viewers see how a given player navigated his way around the course. There are also new picture-in-picture and player comparison features for the iPad app and on desktop.

In addition, The Masters will offer a 4K video feed of “Amen Corner” — holes 11, 12, and 13 — for the first time to those with compatible TVs or DirecTV. IBM noted that this is the first sporting event with live streaming in 4K.

There is also a virtual reality feed — NextVR, California-based startup that continues to push forward with sports-related virtual reality broadcasts, is setting up cameras on holes 6 and 16 that will give viewers a virtual front row seat at Augusta. You can access the feed via the NextVR app in the Oculus Home app store for Samsung Gear VR devices. It will be similar to what we experienced at the U.S. Open this past summer.

Finally, IBM is also again powering Masters.com, which is one of the more impressive sporting event websites with a sleek array of photos, video, live HD video feeds, infographics, and related content. You can check out how the Masters.com homepage has evolved since 1996 here.