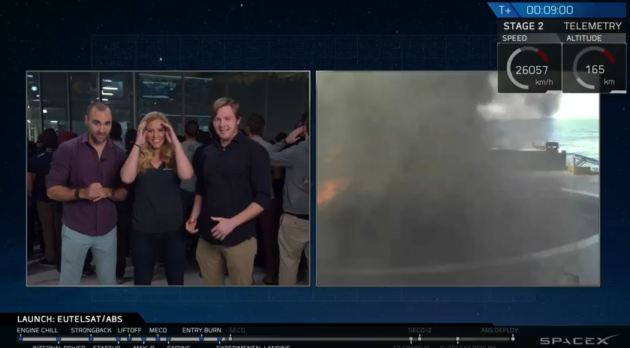 There were cheers, groans and no small amount of suspense at SpaceX headquarters in Hawthorne, Calif., this morning, as live video from a drone ship cut out just as the first stage of a Falcon 9 rocket was attempting to land on the autonomous platform in the Atlantic Ocean.

Later, the word came: “Unfortunately it appears we lost the vehicle.”

This would have been the fourth rocket landing at sea for SpaceX, and the fifth landing overall.

SpaceX launched two Boeing-built communications satellites, EUTELSAT 117 West B and ABS-2A, to Geostationary Transfer Orbits (GTO) as part of this morning’s mission. Elon Musk’s commercial space venture warned in advance that the attempt to land the Falcon 9 would be especially challenging. “As with other GTO missions, the first-stage will be subject to extreme velocities and re-entry heating, making a successful landing difficult,” said SpaceX in a news release.

ABS satellite has been deployed into a nominal orbit

.@Eutelsat_SA satellite has been deployed into a nominal orbit

Ascent phase & satellites look good, but booster rocket had a RUD on droneship

Looks like thrust was low on 1 of 3 landing engines. High g landings v sensitive to all engines operating at max.