Over the past decade, the lodging industry has split into two rival camps — hotels and short-term rentals — thanks to the rise of disruptive tech companies like Airbnb and HomeAway. But unlike these services, sold as everything hotels aren’t, Stay Alfred claims to offer the best of both worlds.

The unassuming startup has been slowly building its brand, reputation, and customer base since 2012. It operates short-term rentals out of the downtown neighborhoods of 13 major U.S. cities. With $13 million in revenue so far in 2016, Stay Alfred says it’s on pace to generate more than $25 million in revenue this year. CEO Jordan Allen says a consistent, branded experience at every location is key to the company’s success.

“Control of the entire guest experience is a major advantage for us,” he said. “At the end of the day, most of our ‘competitors’ are marketplaces for someone else’s widget. We’re the marketplace and the widget.”

Stay Alfred leases individual units and entire buildings and uses them as its inventory — effectively creating lodging space out of existing residential buildings. It controls the furnishing, cleaning, booking, and customer service for each rental. Its customers are primarily leisure travelers or people who want the consistency of staying in a hotel with the space and flexibility of a furnished apartment. For example, a patient traveling for a cancer treatment, with medical equipment and staff, may prefer a Stay Alfred rental over other accommodations.

“A hotel room is pretty small and then do you really want to be doing medical stuff in some guy’s spare bedroom? It’s just kind of weird. There’s an undeniable need for what our product is,” said Allen.

Stay Alfred has been battling regulation, like Seattle’s proposed 90-day cap on commercial short-term rental operators, since it was founded. But Allen says the startup has been able to avoid or work within regulations because it operates exclusively out of downtown locations. In many cities, rules aimed at curbing short-term rentals don’t apply to commercial districts — although that isn’t the case in Seattle. 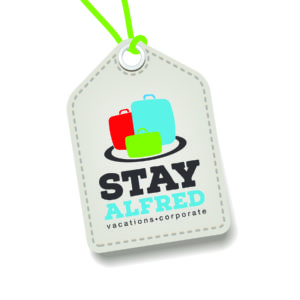 Allen co-founded the company with Conrad Manfred, who eventually moved on to other ventures. “Alfred” is a combination of the co-founders’ surnames — though they went through at least three name iterations before settling on Stay Alfred.

The startup employs 60 at its Spokane, Wash. headquarters, and an additional half dozen remote workers. Allen founded Stay Alfred at 28 and bootstrapped it from the beginning. He was able to scale the business based on cash generated from the initial properties. Only now is Allen considering fundraising.

“Our vision for our company has really solidified over the last few months even.” said Allen. “What we really need to do is build our strong brand similar to a Marriot or a Hilton in this Airbnb vacation rental space. So the check-in experience is the same. The cleaning is the same. Your furniture is the same. It’s really creating this brand people can rely on. I think the Airbnbs and HomeAways do have some great experiences there. That’s why they’re growing so much. But you’re kind of rolling the dice. You never know what you’re going to get.”