Buying a home will probably be the biggest purchase of your life. Imagine earning airline miles for it.

That idea was the impetus for FlyHomes, an online real estate brokerage and platform that rewards house hunters with airline miles when they purchase a home. Today, the startup is coming out of stealth mode in Seattle, where it has been operating quietly since late last year, and launching a beta version of its product in Boston. FlyHomes plans to expand service to Silicon Valley in early June.

FlyHomes works with Alaska Airlines to provide homebuyers with miles that can then be used with a number of carriers. The startup purchases miles from Alaska at a discounted rate and uses an algorithm to determine how many miles each house is worth. FlyHomes’ goal is to be in the ballpark of one mile per dollar spent on a home.

These kind of partnerships are attractive to airlines because they help with brand development in major metropolitan hubs, says FlyHomes co-founder and CEO Stephen Lane.

Rewarding homebuyers with miles is a way to differentiate FlyHomes from competitors in the crowded real estate space. While miles are the hook, Lane says he believes the home-buying platform itself will also be a draw.

“This is a flexible experience,” he said. “We can hand-hold you through the entire process or we can take a step back and let you do it your way. You can go to open houses. You can schedule tours. We’ll have someone there to open the door for you this afternoon if you want to. You’re in the driver’s seat.” 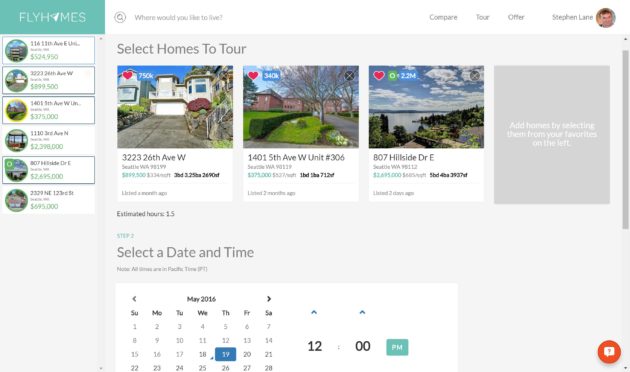 FlyHomes is determined to shake up the real estate experience for buyers and agents. It taps the pool of agents who aren’t able to get as many clients as they’d like by offering them part-time work. FlyHomes collects the commission when a buyer closes and agents are paid on an hourly basis.

Buyers are able to own more of the process by vetting homes on the FlyHomes platform and then connecting with one of those part-time agents to open doors to properties they’re interested in.

“We’ve now hired Uber drivers who used to be real estate agents that are opening up doors for clients in Seattle,” Lane said. “It’s super scalable across cities.”

Lane and his co-founder Tushar Garg, both former Microsoft employees, combined up with Zak Allen a freelance developer to launch FlyHomes. They started the company out of Chicago, where they met Allen, but most of the team (including Garg) operates out of Seattle, FlyHomes’ primary market.

FlyHomes was born out of Lane’s desire to create a millennial-focused home-buying platform. He was inspired by his own experience buying a house and the aspects of the process he found wanting.

“It’s your biggest purchase ever,” he said. “Why not get miles? Our generation kind of expects to earn miles for every purchase they make.”

He also wanted more ownership over the process — a trend, he says, that is common among millennial homebuyers.

“Millennial buyers like myself all think we can buy a home without any help … but then at the end, every single one of those millennial buyers still goes with an agent because they don’t want to mess it up. That kind of experience is really what we’re going after.”

FlyHomes has been bootstrapped up until now. The team is currently meeting with investors and intends to raise a large seed round this summer, according to Lane.

In addition to fundraising, the startup plans to make a number of announcements in the coming weeks. Partnerships with new airlines are in the works. FlyHomes will also begin testing a gameified house-hunting experience with a “House of the Day” worth extra miles if it is purchased that day.

“It’s just fun,” said Lane. “We’re trying to make it so that everyone has fun shopping for houses using FlyHomes.”