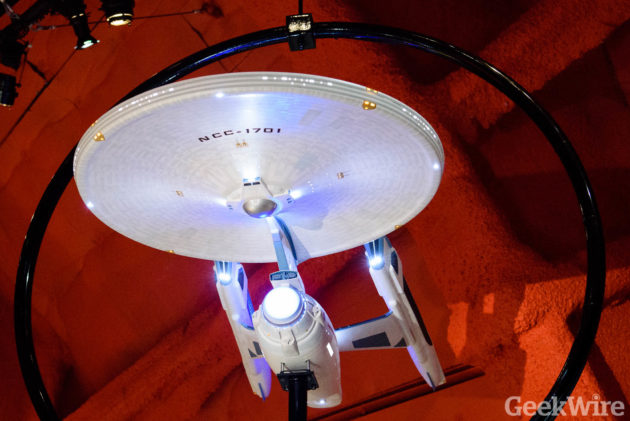 From several yards away, the bridge of the Starship Enterprise looks as if it was beamed down from the 23rd century into the “Star Trek: Exploring New Worlds” exhibition that opens Saturday at Seattle’s EMP Museum.

But up close, you can tell it’s a 50-year-old movie prop, with rocker switches from the ’60s and bits of plastic peeling off the control console.

In a weird way, that’s a big part of the golden-anniversary exhibition’s appeal. When the TV show had its premiere in 1966, “Star Trek” was all about a bright and shiny future. It still is, but the exhibition also casts a spotlight on the social issues and foibles that have shaped the saga over the course of five decades.

“Star Trek” is famous not only for its optimistic vision of spaceflight and technology, but also for its allegorical references to the civil rights movement and cultural diversity, East-West tensions and the rise of environmentalism, gender identity and same-sex relationships.

“All these are ingredients that you can see get funneled into ‘Star Trek,'” museum curator Brooks Peck said today during a preview of the exhibit. And they’re funneled into the exhibition as well.

The events planned for this weekend’s opening should give a giddy thrill to even the most Spock-like of “Star Trek” fans.

On Friday night, there’s a sold-out “Landing Party” with DJs and dancing, drinks and games, plus a Q&A with “Next Generation” stars Brent Spiner (who played Data, an android struggling to understand humanity) and Denise Crosby (a.k.a. Lieutenant Tasha Yar, the Enterprise-D’s security chief).

On Saturday, the museum hosts an autograph and photo session with Crosby and Spiner, a workshop for educators, and a showing of the fan documentary “Trekkies” that’s followed by a Q&A with Crosby.

The opening weekend winds up on Sunday night with a 7:30 p.m. screening of “Star Trek II: The Wrath of Khan” in the museum’s mammoth Sky Church, which may well be the closest thing you can get to an outdoor movie indoors.

Peck promises that there’ll be more “Star Trek” shindigs ahead, particularly when the official 50th anniversary hits in September. But you don’t have to wait until then to beam up.

The bridge from the original series has been recreated with console props and screens that reflect 1960s technology in well-used condition. You can feast your eyes on artifacts from pretty much all of the “Star Trek” saga’s TV and film incarnations, including a model Enterprise that was rescued from “Star Trek: Phase II,” a series that never made it to prime time.

The costumes run the gamut from the miniskirt that Lt. Uhura wore in the original series to the sensible pantsuit that Captain Kathryn Janeway donned for “Star Trek: Voyager.”

“We have a costume for every captain,” Peck said.

One of Peck’s favorites is Captain James Kirk’s sparkly, sleeveless uniform from an episode titled “Mirror, Mirror,” in which Kirk and other officers switched places with their evil counterparts from a parallel universe. “In person, it’s like ‘Disco Mirror Kirk,'” Peck joked. 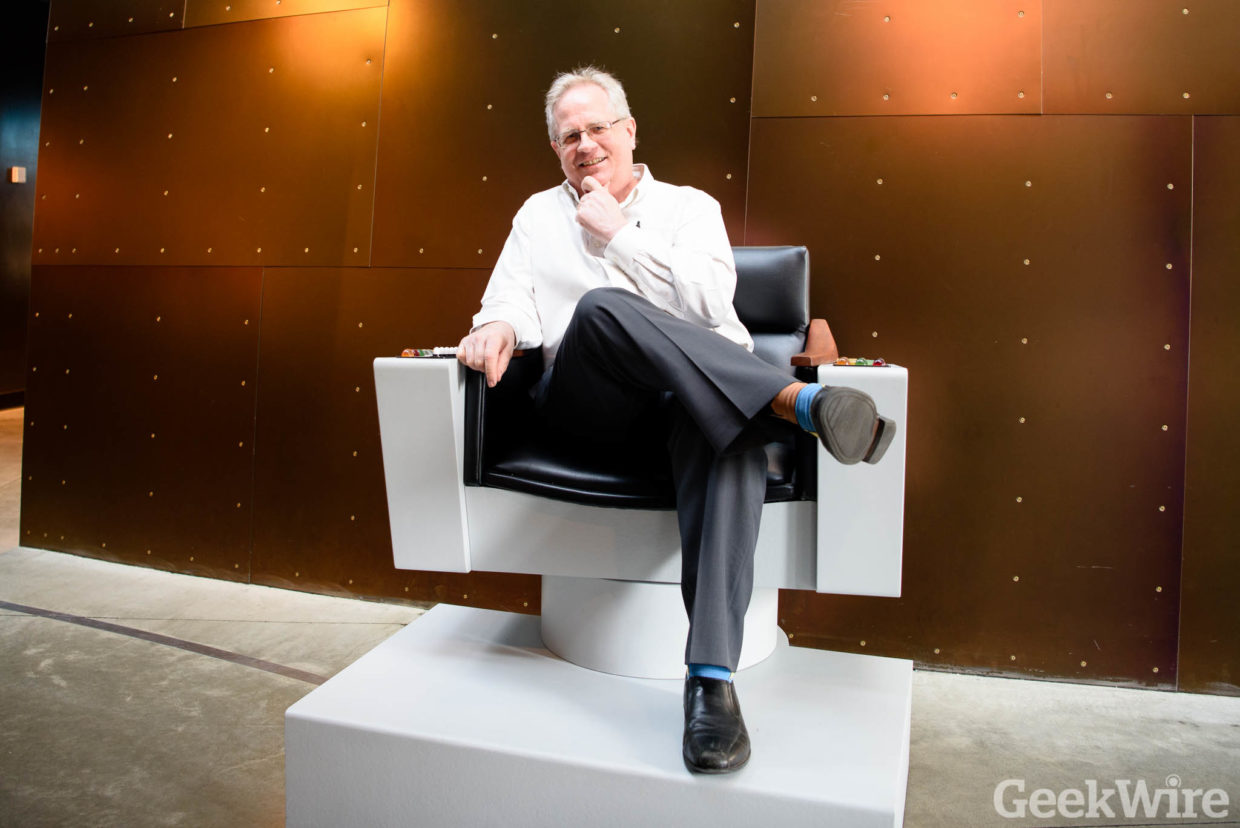 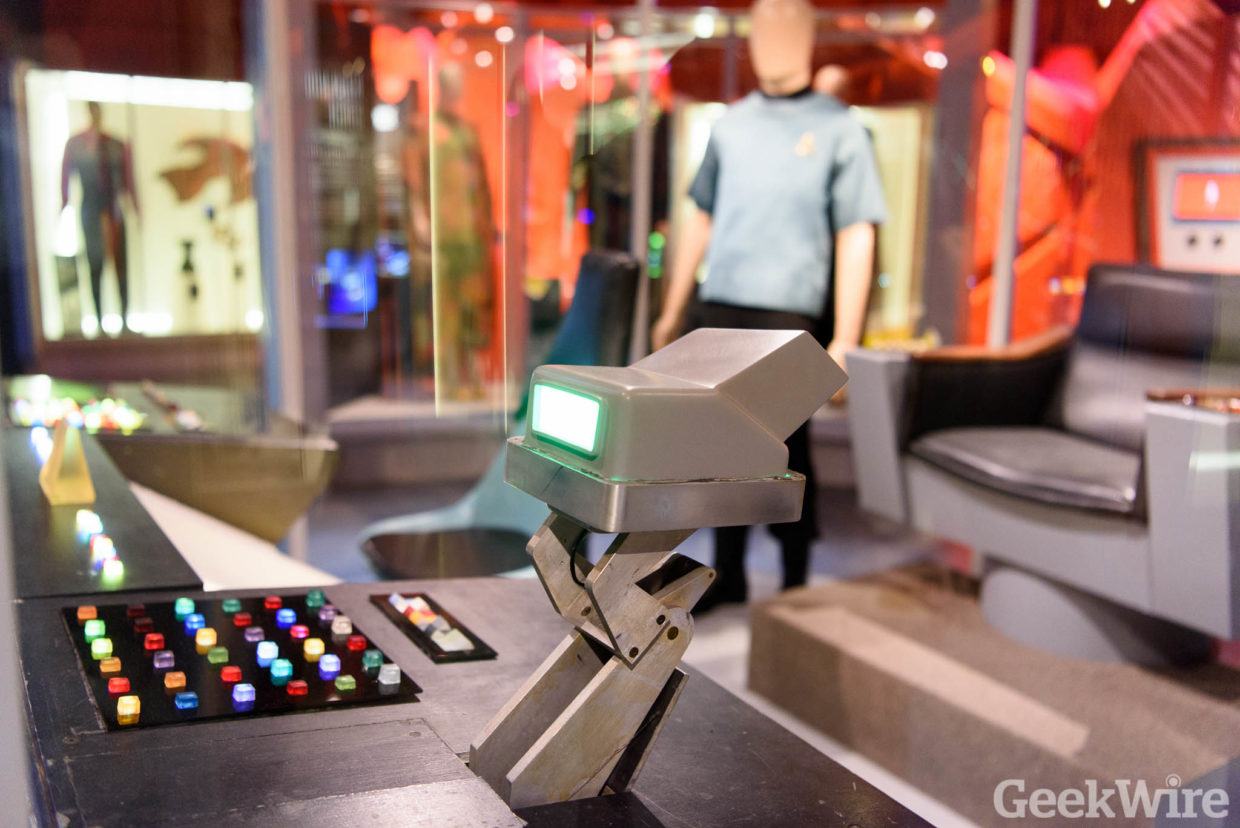 The bridge from the original “Star Trek” TV series is recreated at the EMP Museum. 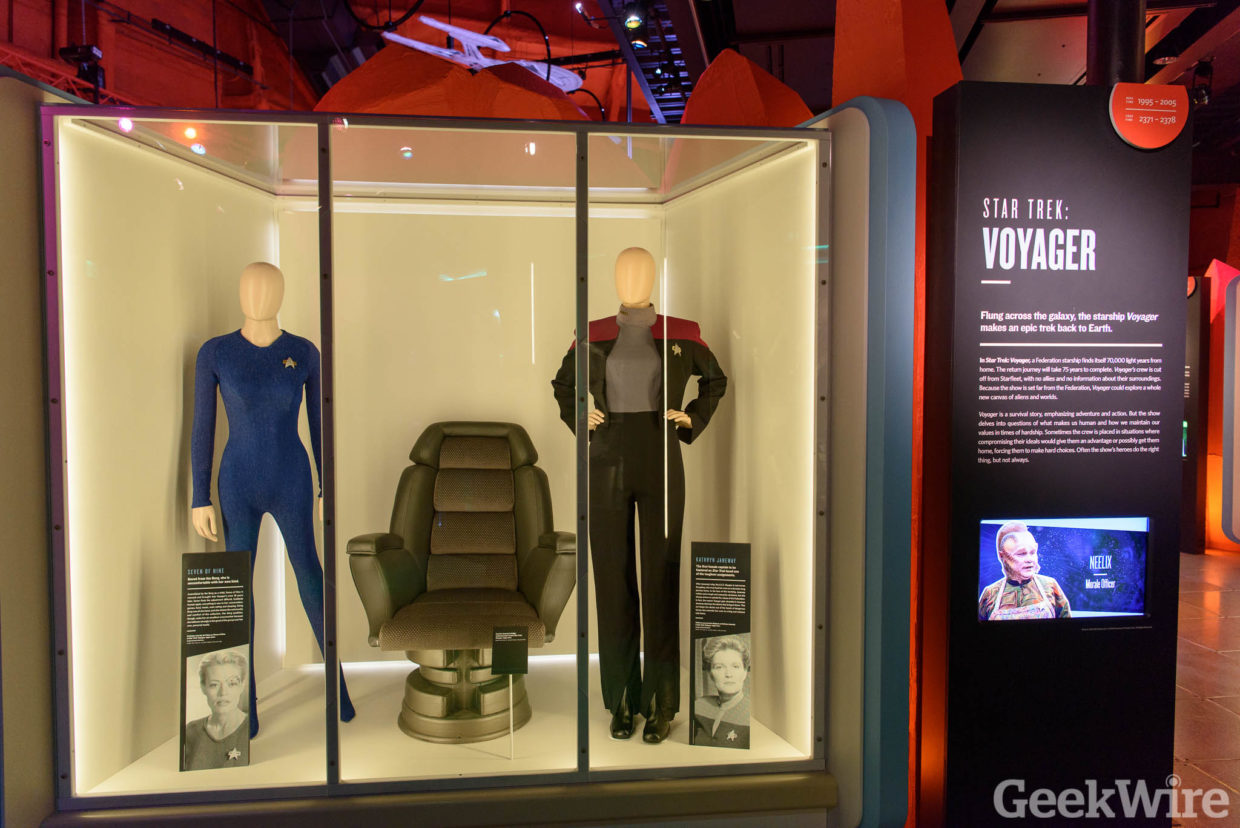 A display focuses on “Star Trek: Voyager,” including the uniforms worn by Seven of Nine and Captain Janeway, and a cushy captain’s chair. 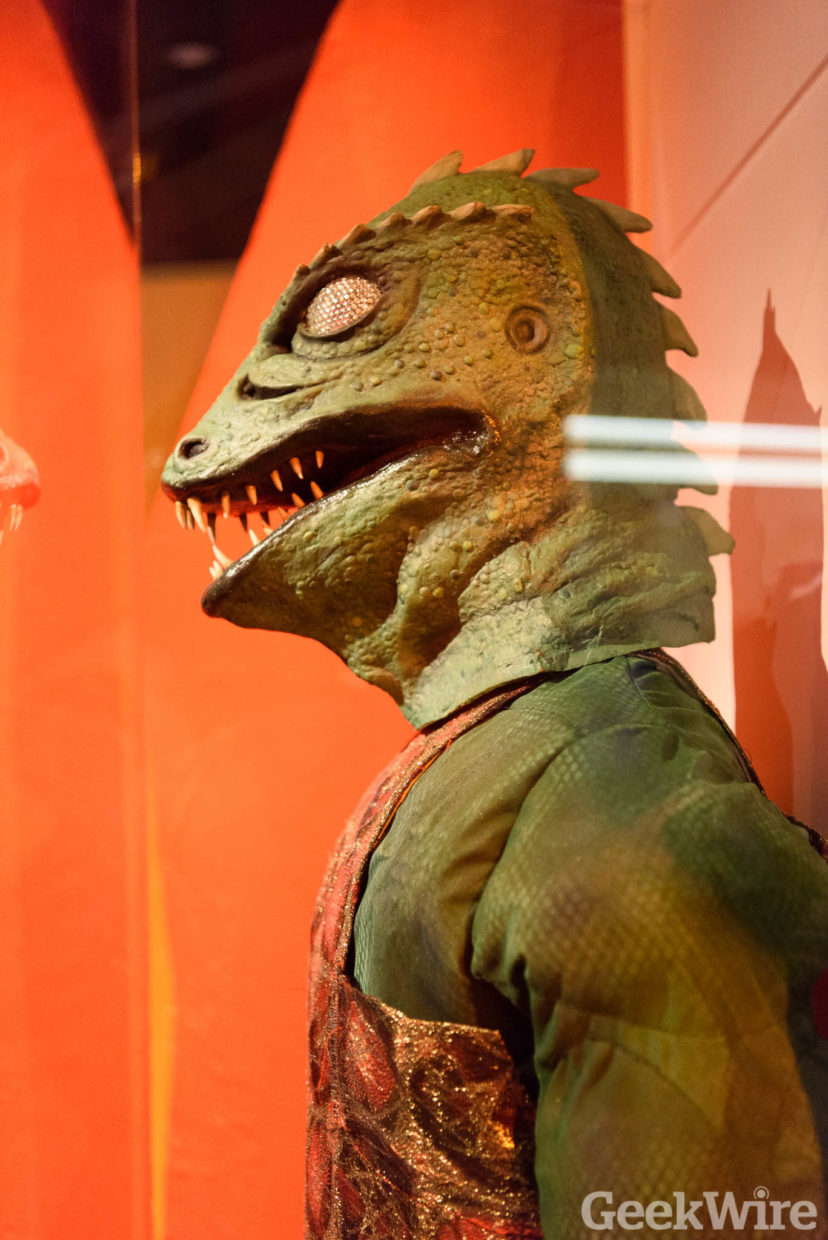 This mask was worn to portray the Gorn, one of the best-known monsters on the original “Star Trek.” 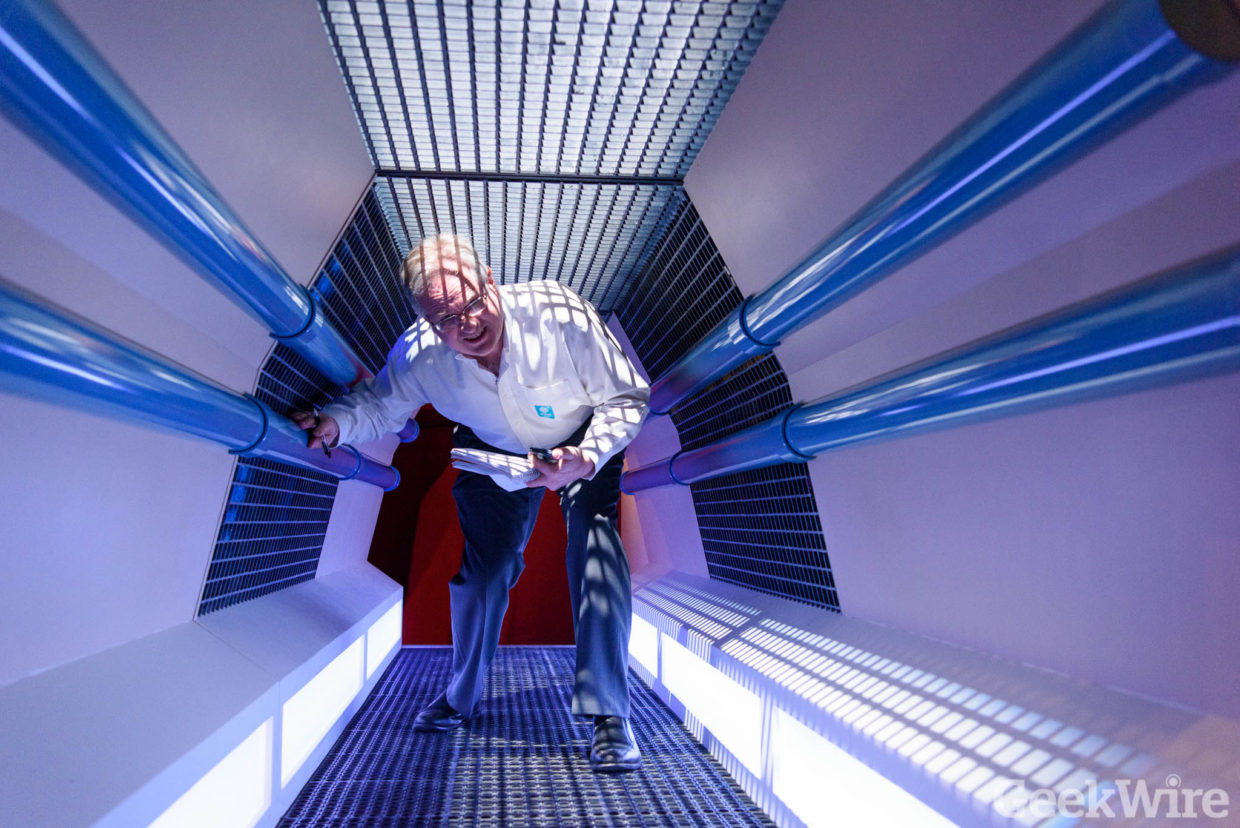 GeekWire’s Alan Boyle crawls through a “Jefferies tube,” one of the maintenance tunnels often shown as being part of the Starship Enterprise’s innards. The corridor is named after art director Matt Jefferies. 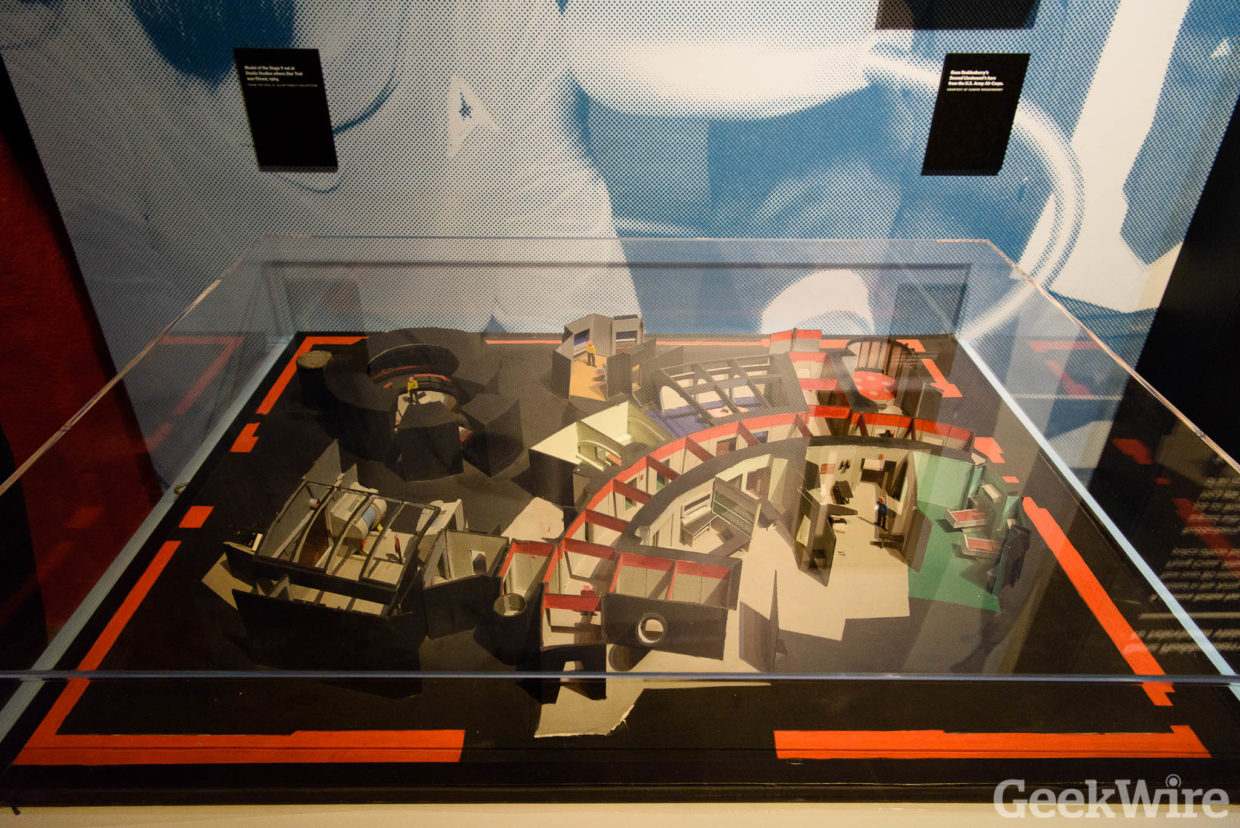 This is a miniature set model that was used to plan episodes of the original “Star Trek.” 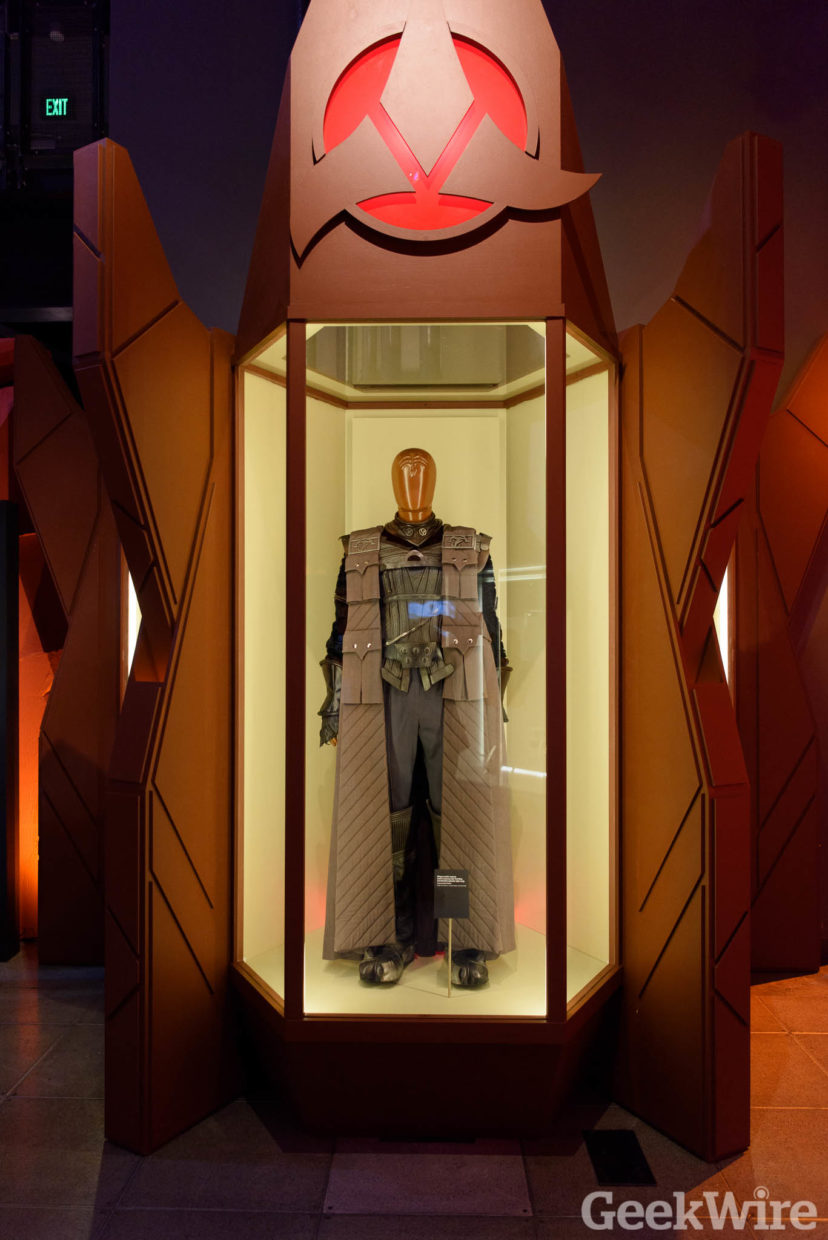 Elements of this Klingon costume were worn by Worf on “Star Trek.” 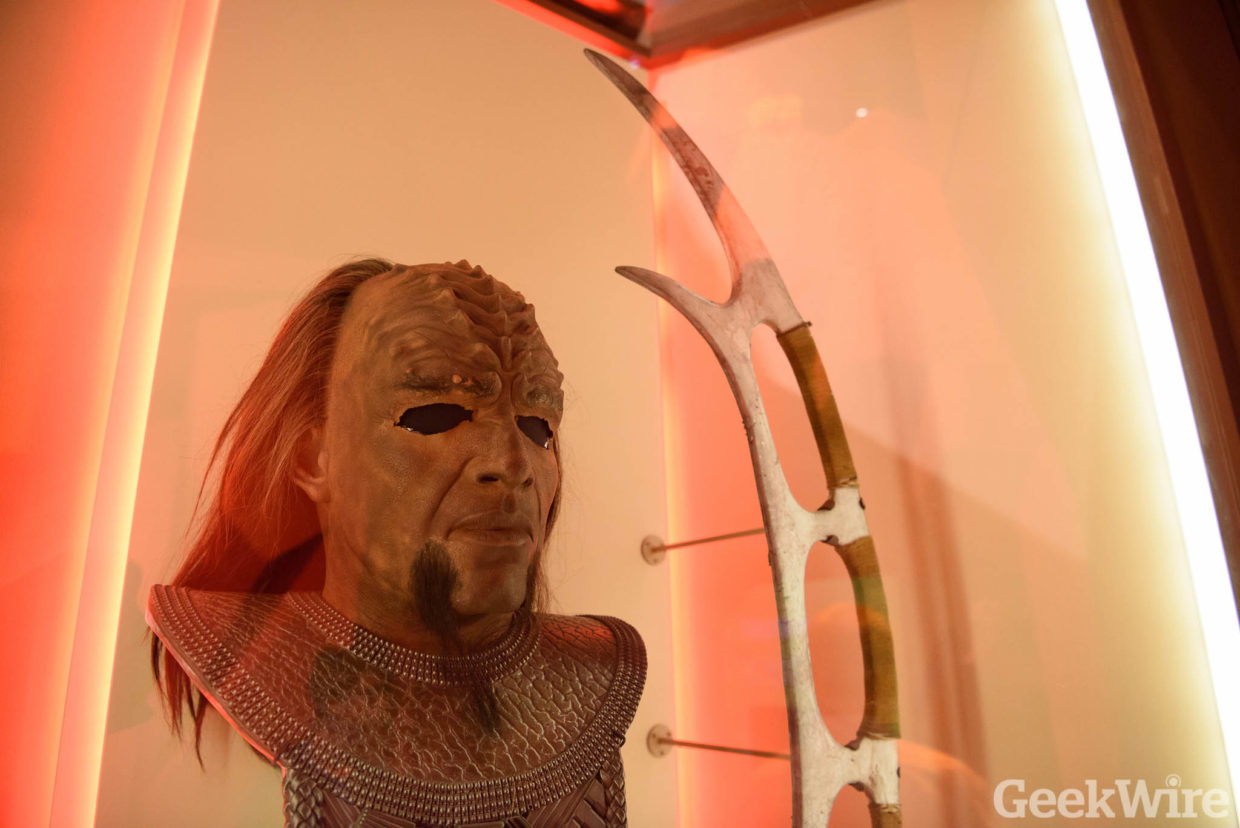 A Klingon mask and prop weapon fills a display case at the MoPOP Museum. 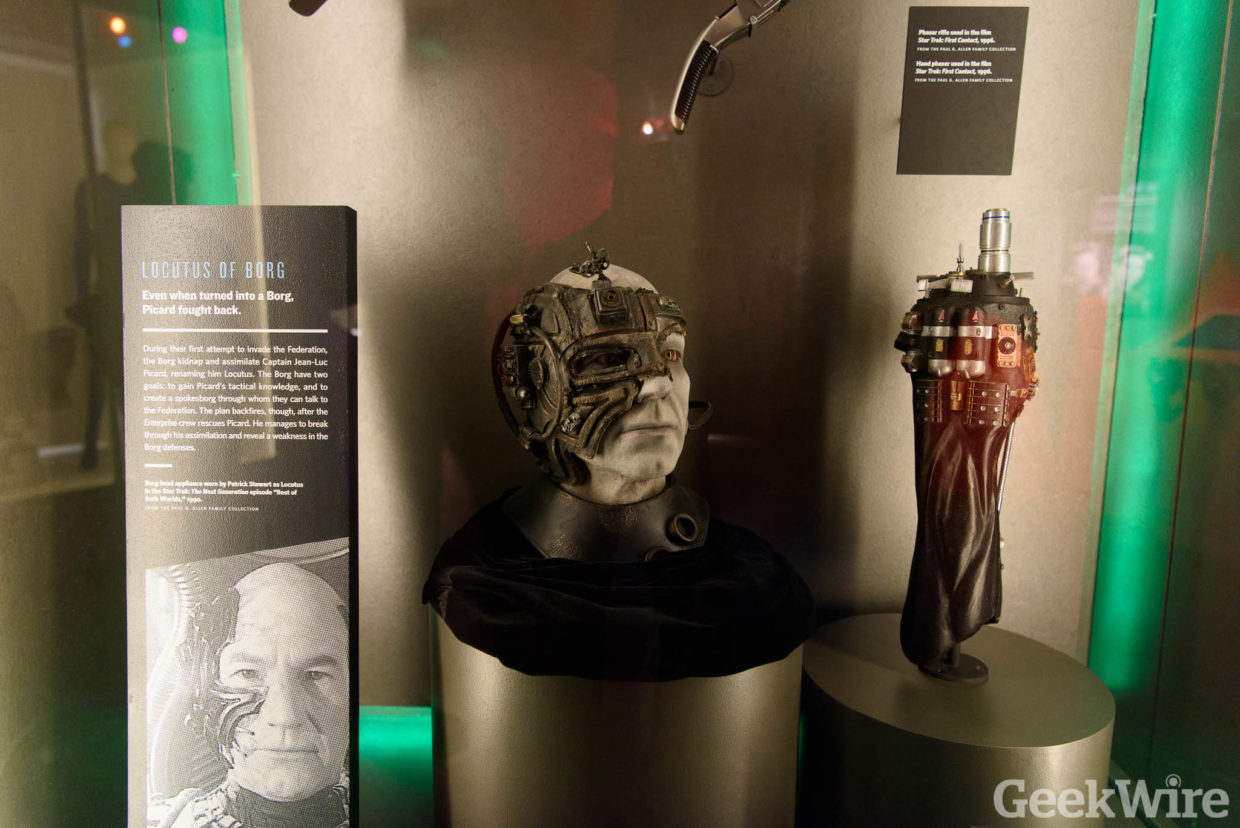 One of the displays at the EMP Museum pays tribute to the Borg. 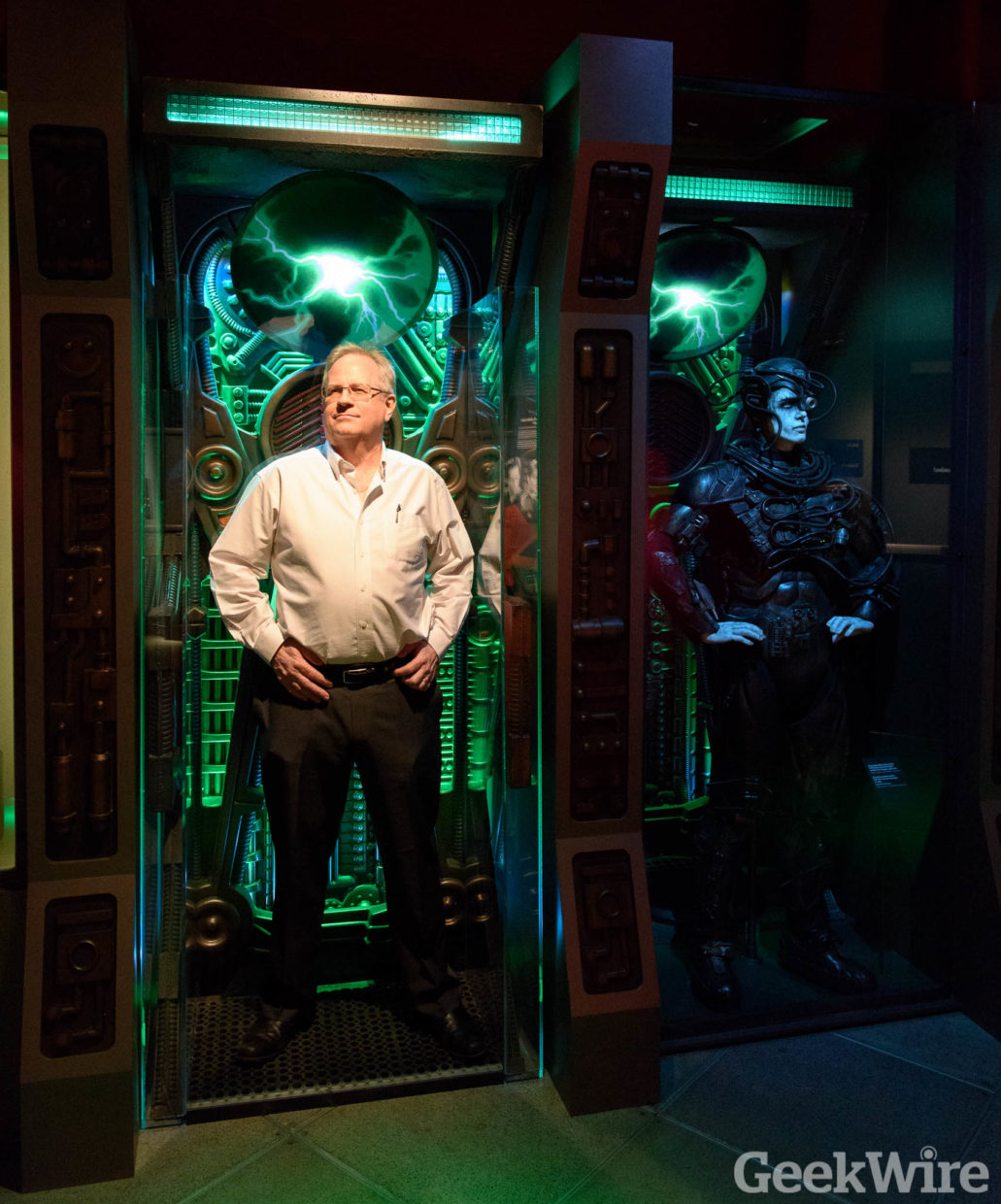 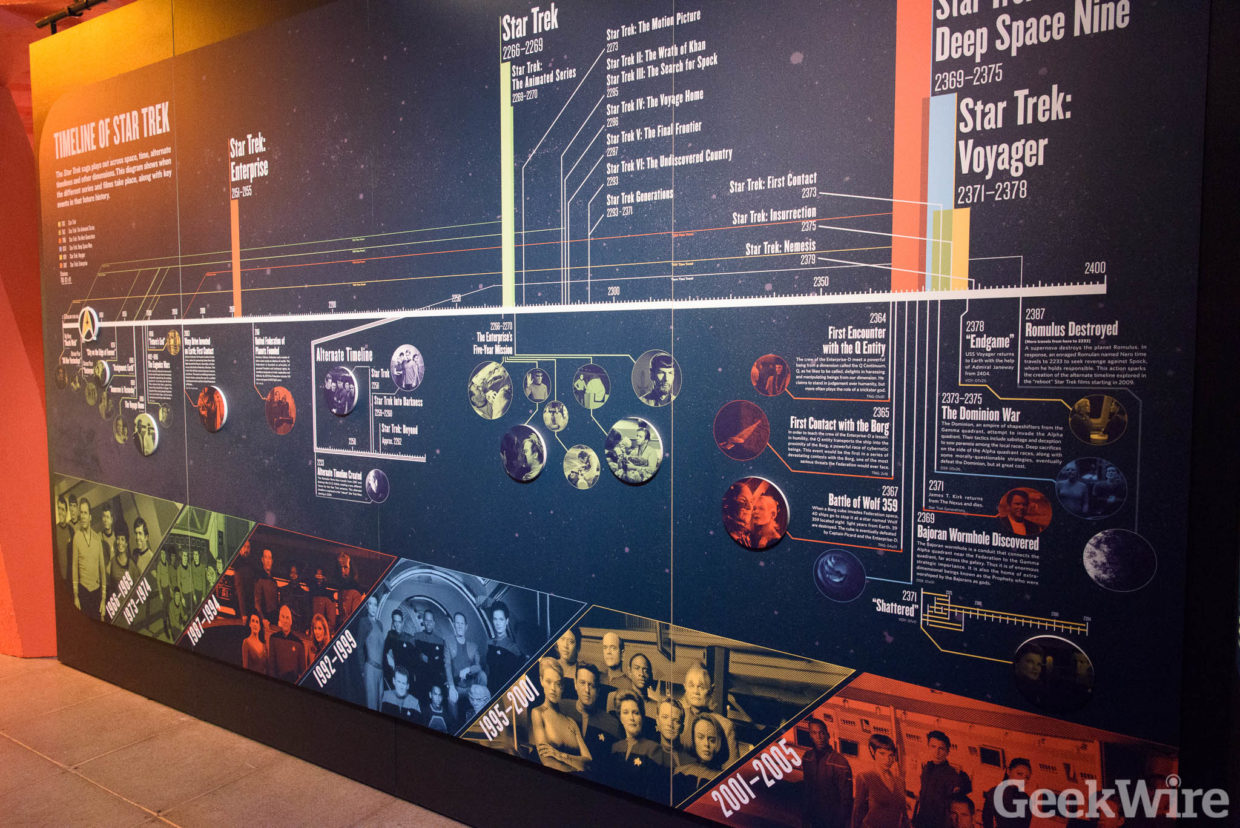 The EMP Museum provides a guide to all the shows in the “Star Trek” saga. 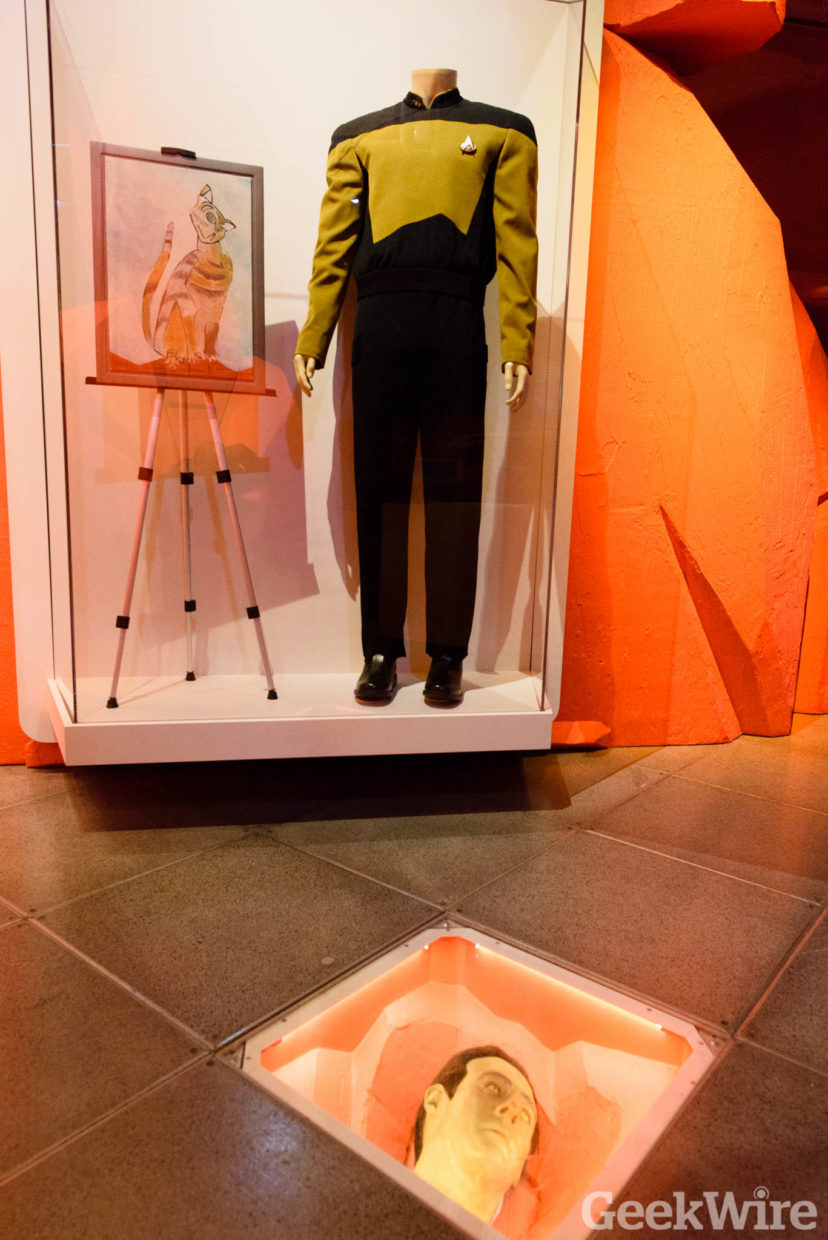 This display features the uniform worn by Data, a replica of the android’s head, and a painting of his cat, Spot. Prints of the artwork are available at the gift shop. 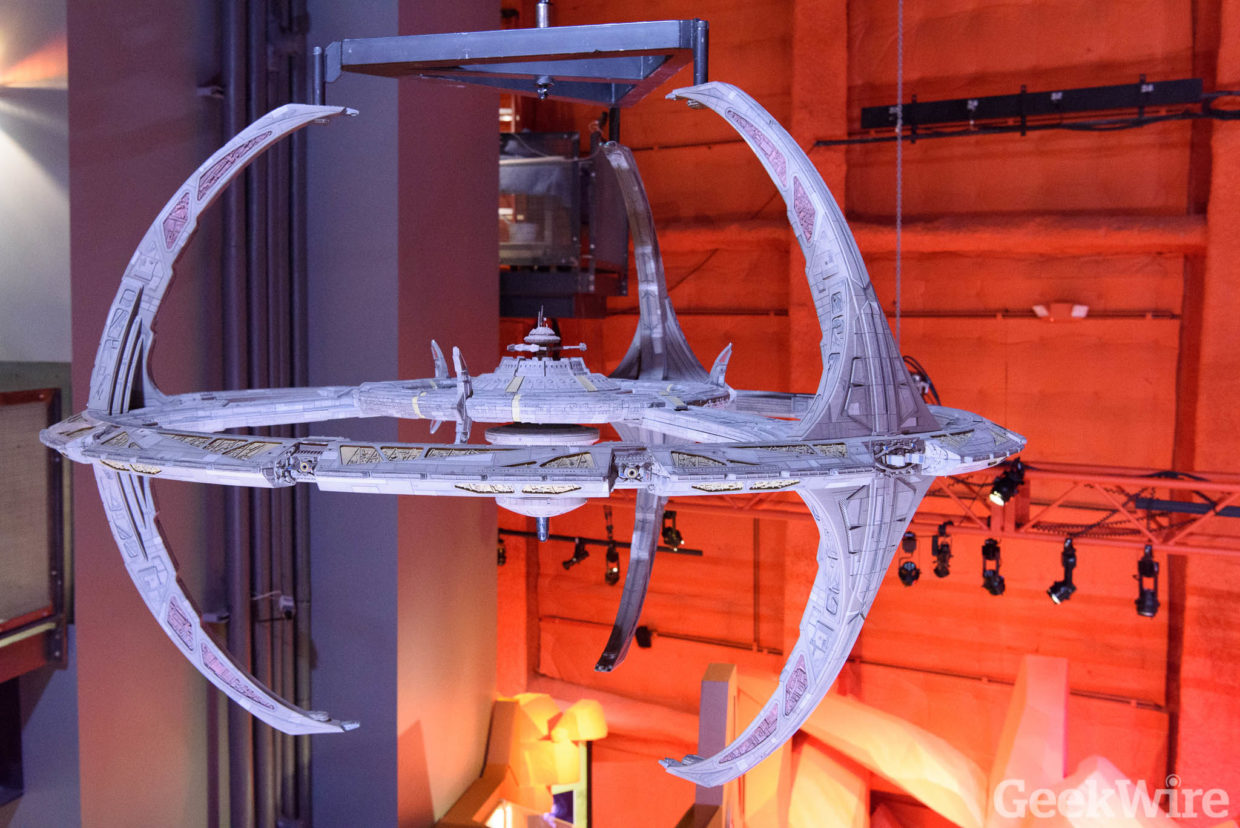 The exhibition features several of spacecraft models used during production of “Star Trek” episodes, including this model of the Deep Space 9 space station. 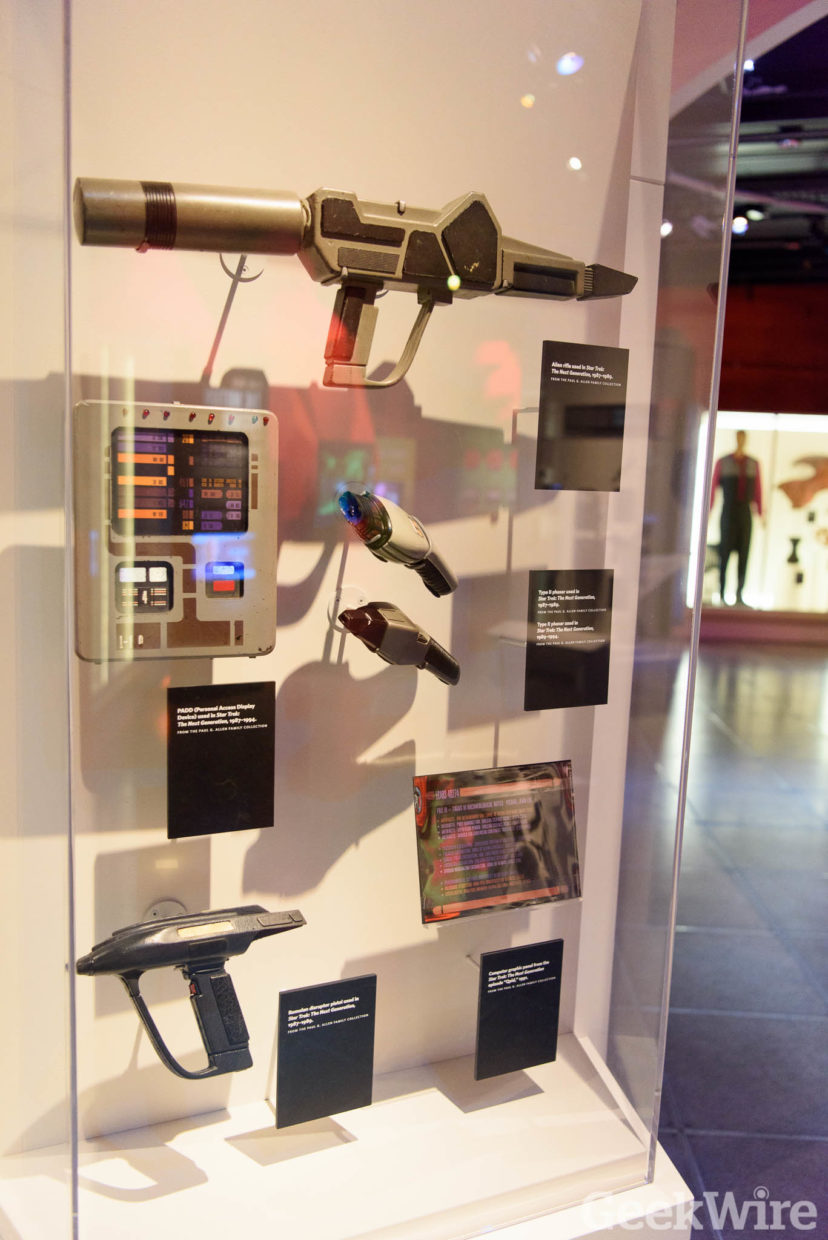 Phasers and other “Star Trek” armaments are on display at the EMP Museum. 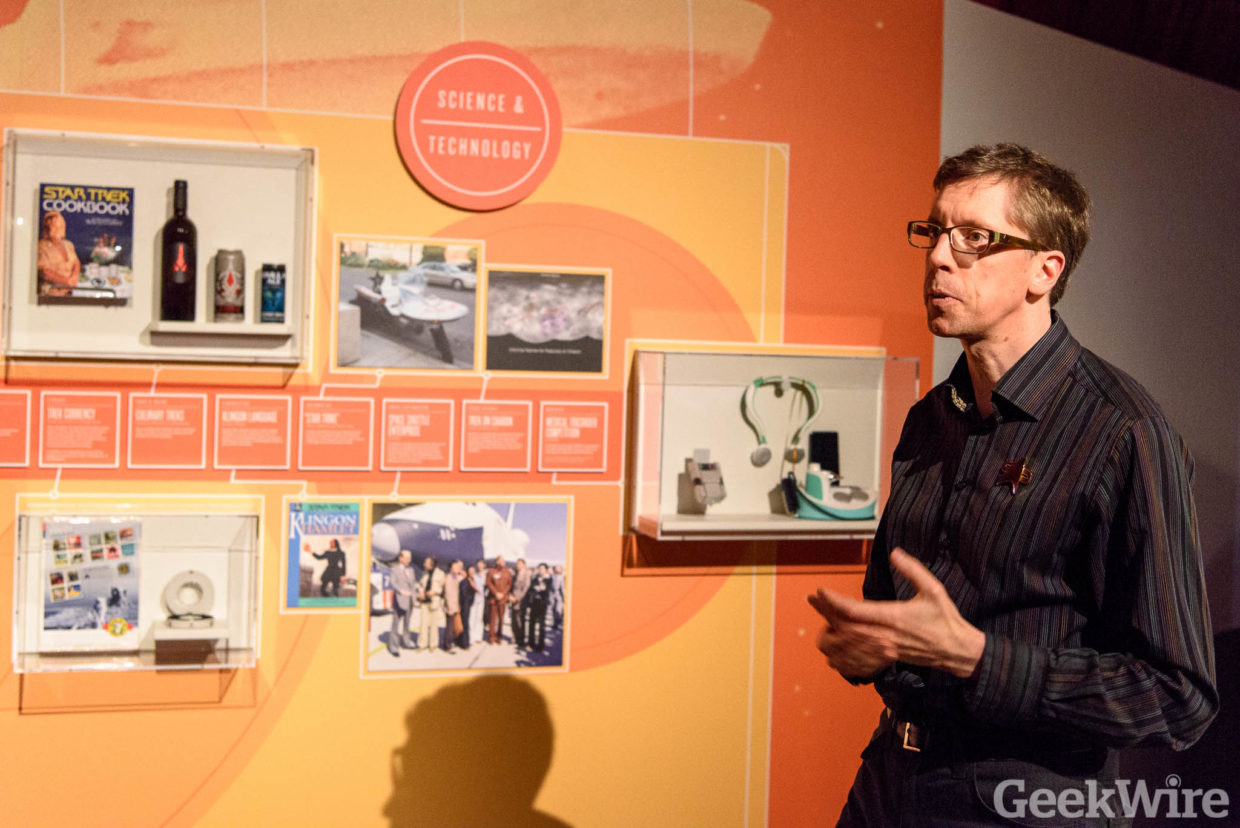 Curator Brooks Peck shows off a display that highlights the influence of “Star Trek” on popular culture.

There are costumes from not just one, but two Khans – the original Ricardo Montalban version, and the Benedict Cumberbatch reboot.

You can even go into a booth and stand in for William Shatner to record the scene where Kirk yells “Khaaaaaaan!” Another interactive set lets you play a scene in which you beam down to the surface of a planet, blast a baddie with a phaser, then beam back up to the museum’s transporter room. In both cases, you can have the resulting video clip emailed to yourself, or to your fans.

‘Star Trek’ is our mythology of the day.

But the exhibition isn’t just about what’s on the screen: One display focuses full-bore on the cultural impact that “Star Trek” has had: Don’t miss the groovy picture of the cast gathered around the space shuttle Enterprise in 1976, or the Vulcan foam fingers that served as a Red Sox giveaway last year. And be sure to spin up some of the “Star Trek” tunes from Five Year Mission and Warp 11.

So is “Star Trek” about our 20th-century past, our 21st-century present, or our 23rd-century future?

“That’s a great question,” Peck said. “In the exhibit itself, we’re looking at the history of the phenomenon, certainly. But it’s a living history, and it definitely points ahead. ‘Star Trek’ is our mythology of the day. And I think as long as ‘Star Trek’ is inspiring people to think about what our lives should be like in the future, there will be ‘Star Trek’ as a way to explore those ideas.”

“Star Trek: Exploring New Worlds” opens Saturday and runs through February 2017 at the EMP Museum at Seattle Center. The costumes, artifacts, photos and videos for the exhibit were provided by CBS and by private collectors – including Seattle billionaire Paul Allen, the museum’s founder. Coincidentally, CBS released a first-look teaser for next year’s “Star Trek” TV series today.

Correction for 9:15 p.m. PT May 18: I mistakenly gave Uhura a promotion from lieutenant to lieutenant colonel, but that mistake has been remedied. It’s worth noting that Uhura rose from the rank of lieutenant to commander over the course of her “Star Trek” appearances.