Some people have a sweet tooth. Daniel Rossi wishes it were that simple.

“I have all the teeth,” he jokes. “I have a sweet tooth, a salty tooth, a beer tooth, a meat tooth. Whatever the teeth are, I’ve got all the teeth. … I didn’t have to be hungry to eat. I would eat until I was full. Until it hurt.”

But a big appetite is just the start of his challenges. For several years, Daniel worked a full-time job while getting his MBA and trying to get a technology company off the ground. The long hours and bad habits caught up to him. He has since been diagnosed with Type 2 Diabetes, a condition that influences the way the body metabolizes sugar — posing a serious threat to his long-term health and wellness.

“I need to conquer this chronic misbehavior and instead form new habits, good habits that get me into a healthy place so I can keep on keepin’ on for a long time,” he says. “Otherwise that won’t be the case for me.”

At 38 years old, 5-foot-11 and nearly 260 pounds, Daniel Rossi is at a crossroads. But he knows which path he needs to take, and he’s inviting GeekWire readers to join him on the journey. Daniel is GeekWire’s chief business officer, and he has volunteered to open up his life for this year-long GeekWire series chronicling his effort to transform his health, using cutting-edge science and technology.

He’ll be getting help from his own genes. As part of the series, GeekWire is paying for Daniel to participate in Arivale, the Seattle-based company co-founded by biotech pioneer Dr. Leroy Hood. Arivale’s program combines personalized data, including genetic analysis, with one-on-one coaching in an effort to optimize wellness. The program runs $3,499 in the first year, and between $999 and $1499 in the second year, depending on the package a participant chooses.

This monthly series will serve in part as a review of Arivale — the first time a media outlet has followed a “pioneer,” as Arivale calls its participants, so closely through the program. Arivale is providing information about its program and access to its representatives, but this is an independent editorial project.

Arivale has plenty of competition as part of a new wave of companies applying personalized genetic analysis to health. In that way, the Arivale program provides a glimpse of the future, as a window into the emerging field that Hood calls “scientific wellness.” Arivale says its interactive program is unique with its blend of genetic analysis and behavioral coaching, correlating a variety of inputs to optimize wellness.

The personalized nature of the Arivale program means that many of the recommendations will be tailored to Daniel’s unique situation. But our hope is that GeekWire readers will also be able to draw broad insights from his experience, cheer him on to meet his goals, and perhaps find the motivation to establish and maintain healthy habits of their own.

Beyond taking part in the Arivale program, Daniel will also be looking for other ways to use technology to achieve his goals, trying out new health gadgets and apps along the way, and we’ll be documenting those efforts as part of the series, as well.

“We have this platform. I have a chance to publicly do something,” he says. “I hope that some of this information that gets out there is helpful to some of the other folks who are in my shoes.”

Getting with the program

Daniel signed up for the Arivale program in mid-October through the company’s online portal, and it quickly became clear that communication would be a big part of the process. 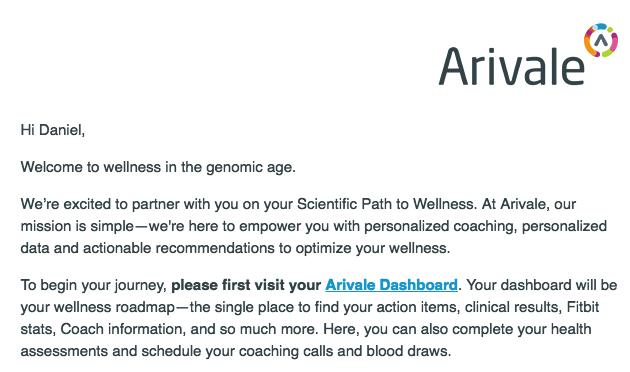 Messages from the “Arivale Concierge” explained how to get up and running, and reminded Daniel of an upcoming appointment for his blood draw at an Arivale partner lab, the key step to sequence his genome.

His coach, registered dietitian and nutritionist Ginger Hultin, emailed to introduce herself — complete with a video interview explaining her approach — and set up an initial call.

A welcome package arrived at Daniel’s house with a Fitbit Charge HR device, a tape measure for sizing up his waist, and collection tests for his saliva and gut microbiome. He received automated shipping notifications after submitting those samples.

There was even a standard welcome message from Arivale CEO and co-founder Clayton Lewis, complete with Lewis’ personal cell number for Daniel to call if he had any questions or comments.

In his personalized Arivale online dashboard, Daniel was able to schedule appointments and complete his initial online assessments, including personality tests designed to help his Arivale coach understand how to best work with him. That dashboard also syncs up with Daniel’s Fitbit and shows an array of information, including the initial results from his lab tests.

Arivale’s team includes physicians, nutritionists, dietitians, and other licensed professionals who order tests, review clinical results and work with participants. In that way, it’s not considered a direct-to-consumer or over-the-counter program. The company is also careful to point out that it’s a wellness program — designed to optimize a participant’s health, not to diagnose, treat or cure disease.

“There’s often not going to be anything we can really do about the disease itself, depending on what the condition actually is,” said Dr. Jennifer Lovejoy, the company’s chief translational science officer, in a recent interview. “But many times we can address foundational imbalances, and help people to feel better and empower their bodies to manage whatever medical treatment they’re also going through.”

Lovejoy has specific experience in the condition Daniel is grappling with, having served as a co-investigator on the Diabetes Prevention Program and LookAHEAD clinical trials as a faculty member at Louisiana State University’s Pennington Biomedical Research Center. In the case of diabetes and obesity, factors including nutrition, exercise, sleep, and stress management can improve symptoms such as fatigue and nerve pain.

“Lifestyle can really do a lot in terms of managing it, and it can also have a big impact on quality of life,” she said.

The underlying data used by Arivale comes from four areas: genetics, blood and saliva, gut microbiome and self-tracking. Arivale says the idea is to combine personalized data and coaching with specific recommendations to optimize wellness.

“At a deeper level, it’s really about using data across multiple systems, multiple data types, leveraging not only your genetic predisposition but also what’s currently expressing in your life,” Lovejoy said. “And then the value of the coaching is really to help prioritize that, so that you can take this large quantity of data and actually make sense of it and figure out where you need to start behaviorally.”

Mornings at the gym

Behavior is exactly where Daniel is getting started. While awaiting the results from his initial genetic analysis, he has been working out six days a week, lifting weights, going to the boxing gym, and hitting the trail at Seattle’s Green Lake.

He’s eating healthier foods, choosing veggies and salad over greasy sides when possible. That has been more challenging than usual because he has been eating out more frequently, rather than cooking at home, as he and his wife Mandy (and their dog Rufus) complete the process of moving to a new house.

During his initial conversation with the Arivale Concierge, Daniel specifically asked for a coach who would push back if he got stubborn, and not let him steamroll his way through the process to his own detriment. He also wanted to make sure that he’d be able to get going on the program in a sustainable way.

“I’ll come clean right off the bat. I’ve been known to start strong and then backslide,” wrote Daniel in one message to his coach. “I want to stop that. I need a win here.”

She responded, “It sounds like you’re absolutely ready for change and I love how you mentioned that you look forward to working hard. So do I. … Let’s work on getting you on the right track and keeping you there. Accountability will be key and we can work together on what that looks like for you.”

Daniel also recognizes that his decision to share his story with GeekWire readers in a transparent way creates a unique level of accountability, and he’s ready for it. That means you’re part of this process, too.

“Seriously, this is sort of laying myself out there,” he said. “So yeah, I’m a little bit nervous, but I hope that this is an interesting enough story for folks to get around, and I can have some accountability there. I think that’s going to be a lot of fun. I have to do this. … I have to. I want to get healthy, and this is a great opportunity to do it.”

NEXT: The first results from Daniel’s genetic analysis.