Shares of Nordstrom spiked more than 10 percent in after-hours trading after the Seattle retailer beat analyst expectations for its second quarter earnings.

Nordstrom posted earnings per share of $0.67, which beat expectations of $0.57, but was down from an EPS of $1.11 last year. The company also posted $3.65 billion in revenue, which slightly missed expectations of $3.68 billion and was about even with the year-ago quarter.

It’s a nice rebound for Nordstrom, which saw its stock sink more than 17 percent in May after missing big on expectations for its first quarter earnings.

“Over the past several quarters, our team has been actively addressing our inventory, expense and capital, and in the second quarter, made substantial progress by bringing down inventory in-line with sales,” co-president Blake Nordstrom said in a statement. “Those efforts, along with the strength of our Anniversary Sale and a great response from customers to that event, drove better than expected results for the second quarter.”

Before the market closed on Thursday, Nordstrom’s stock was up more than 7 percent.

It’s been a good week for apparel retailers, as Macy’s, Kohl’s, and Ralph Lauren also beat earnings expectations. Macy’s announced Thursday that it would be closing 100 stores across the U.S. as it moves to keep up with the rapidly changing retail landscape.

Nordstrom has struggled in its own efforts to keep up with the rise of online retailers like Amazon. It re-examined its tech strategy in May and announced plans to create a more “seamless experience across stores and online.” The company cut 120 jobs on its tech team in March before announcing a month later that as many as 400 “corporate center” jobs would be slashed.

On today’s earnings call with analysts, Nordstrom CFO Mike Koppel said that the company has one-third of its capital focused on IT investment.

“So much of the investment we make today is to build a platform that will allow us to, in a much more frictionless way, develop applications for the customer to make the experience with us very dynamic and very easy,” Koppel said. “We are highly committed to making those investments.”

Here’s a look at Nordstrom’s stock over the past year: 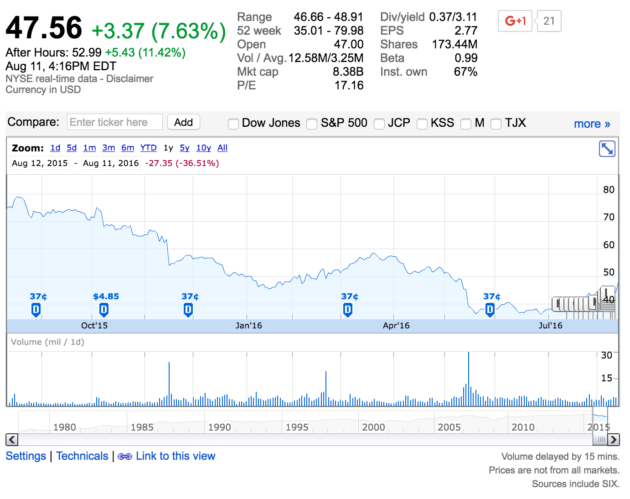