Allrecipes spent most of 2015 cooking up what it calls “Dot Next,” a redesign with an emphasis on social features, mobile optimization, and community. The Seattle-based online recipe company’s goal was to embrace new Internet trends and attract millennials, a demographic coveted by advertisers.

The new site has been live for about seven months and the changes seem to be paying off. The site has seen about 40 percent year-over-year growth in millennial visitors, according to Allrecipes President Stan Pavlovsky. Allrecipes page views over the same time period remained fairly flat but that can largely be attributed to the introduction of a continuous scroll. The site’s monthly visits grew about 24 percent year-over-year.

“Our results speak for themselves in terms of what we’ve seen but also we have stats around our consumer satisfaction and we talk to our consumers on a regular basis,” said Pavlovsky. “Since the redesign, we’ve seen our brand grow fairly dramatically. We’re now at about 80 million uniques worldwide, per month.”

But growth often comes with growing pains or, as Pavlovsky calls it, “the relaunch effect.” Allrecipes has provided a community for cooks for more than 18 years, many of whom found the redesign jarring.

“Allrecipes seemed like the perfect do-it-all site,” reader Liana Hanson commented on a GeekWire post covering the redesign. “What we have now is a very cumbersome, Pinterest-like site. I’m not interested in being social. I want to find a recipe quickly and get cooking.” 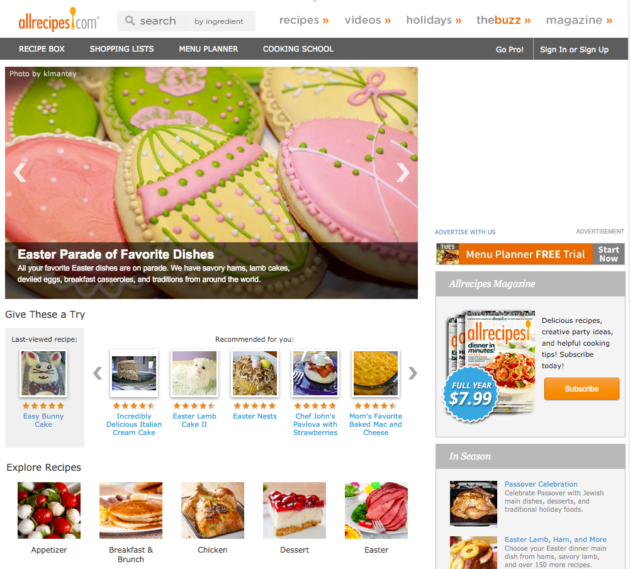 Hanson’s sentiments were echoed by nearly 50 other commenters.

Allrecipes’ makeover represents an interesting challenge for established brands. Advertisers are hungry for access to millennials, a cohort expected to become the largest living generation this year. This group is also just entering the workforce which means spending power. In order to embrace millennials, many sites are going social. Ted.com, PelicanBooks.com — even Whitehouse.gov — have all redesigned their websites to be more responsive and shareable.

Business, like Allrecipes, are catering to millennials’ expectations of what a modern website looks like. While this proves effective for attracting younger users, it can be challenging for older generations to get on board with the social internet revolution.

Pavlovsky, for his part, isn’t overly concerned by the reaction.

“In general, when you do a major redesign there’s something called ‘the relaunch effect’…your existing users want to know what happened. Who moved the cheese on them on them, right? They want to understand why you’ve changed an experience they were so comfortable with,” he said.

That experience was built over nearly two decades, during which Allrecipes evolved from a collection of cuisine-specific sites to one recipe behemoth. The company consolidated its 38 URLs (including sites like Cookierecipe.com, Chickenrecipe.com, etc.) into Allrecipes.com. In the early 2000s, it introduced features like mobile optimization, user photos, and expanded internationally. In 2012 the company was acquired by magazine publisher Meredith Corp for $175 million.

Since launching in 1997, the online recipe network has tried to remain nimble, adapting to the ever-changing Internet landscape. But much of the user experience remained the same, up until the 2015 overhaul.

When asked about the negative feedback, Pavlovsky said some backlash is to be expected, and stressed that Allrecipes is addressing any major user needs or trends it sees. The site, he says, uses satisfaction metrics to ensure the overall reaction to the site is where it should be, despite the relaunch effect.

As Allrecipes’ post-redesign success shows, you have to break a few eggs to make an omelet. Alienating some existing users is a risk many brands are willing to take if it means attracting the coveted 18 to 34-year-old market.