Pull up the Facing Homelessness page on Facebook and you might learn that Eric and Michelle have been living out of RVs for two years, and Michelle has a brain tumor.

Or that Steve went to Garfield High School in Seattle and became homeless five years ago after a divorce. He’s trying to get a truck driving license, and does temp labor.

You may meet Andy, who is 31 years old, half Chippewa Nation, has a college degree, struggled with opiates and “has the nicest way about him.”

It’s surely not the sort of networking that Mark Zuckerberg imagined when he developed the service for his Harvard peers, but Seattle-based Facing Homelessness founder Rex Hohlbein doesn’t care. He has taken the social media site and harnessed it to personalize the issue of homelessness, sharing his humanizing portraits worldwide.

Because while technology has rapidly evolved to solve complex corporate, sales and mainstream networking needs, groups focused on social issues — and homelessness in particular — are getting creative in adapting and building technology that serves humanitarian causes.

There’s an urgent need to do so.

Seattle and King County leaders have declared that the region is experiencing a homelessness crisis. Thousands of people are living on the street, under freeways and in vehicles. Seattle is wrestling with what to do about a sprawling homeless encampment along Interstate 5 that has been dubbed “The Jungle.” The city recently opened a full-service center with the goal of getting people into housing.

It’s not an easy problem to tackle. People who are homeless might have multiple issues needing attention, including physical and mental health problems, substance-abuse issues, domestic violence and other difficulties. And the health, financial, counseling, job training and other services they require come from a variety of government agencies and nonprofit groups.

Tracking all of this information creates unwieldy data-management challenges, but the organizations trying to help often lack the software infrastructure needed to handle the load.

Add to that the fact that their resources are greatly limited, forcing them to decide whether to invest in better software, or a hot meal program for someone who hasn’t had one in days.

[L]egacy technology or paper-heavy systems are holding them back from being more effective in their mission.

“The prioritization of direct services over systems development is a very real concern in all of the social service arenas,” said Ben de Haan, the executive director of Partners for Our Children, a University of Washington School of Social Work research and innovation center. “If you’ve got unlimited need and very finite resources, you are constantly making choices about squeezing out a little bit more for one more person.”

The UW center is developing a tool to help track youth and young adults who are homeless to better provide services for them. It will collect essential data in order to understand which programs are most effective. The project, which also supports foster kids, is funded by philanthropies including the Raikes Foundation, the Gates Foundation and Connie and Steve Ballmer.

Brad Struss and his Seattle-based consulting firm are also tackling these software infrastructure challenges. He’s helping organizations working on homelessness overhaul their systems for managing and supporting clients who are homeless or struggling to afford housing.

The firm, Bigger Boat Consulting, works only with nonprofit groups and is currently assisting housing groups primarily in San Francisco. Like Seattle, the city is in the midst of an affordable-housing crisis fueled in part by a booming technology industry.

“Within the nonprofit sector, sometimes the infrastructure can lag behind,” Struss said. “It takes an organization realizing that legacy technology or paper-heavy systems are holding them back from being more effective in their mission.”

Bigger Boat, with a staff of eight including Struss, is working on a project for San Francisco’s Tenderloin Housing Cinic, the city’s largest supportive housing organization for adults. The clinic provides housing for roughly 2,000 impoverished people and then helps them manage the other issues that they’re facing to help them stay in housing.

Tenderloin Housing, which was founded in 1980, had outdated technology and relied on paper forms for much of its client management. The process made communication with clients, colleagues and other organizations cumbersome.

For the past year, Bigger Boat has been working with the housing group to implement a customized data-management system. The system uses software from Salesforce.org, the nonprofit side of Salesforce, the customer relationship management and cloud computing company. Salesforce.org is a social enterprise that provides free software or discounted products to nonprofit groups.

Bigger Boat has built user-friendly tools for entering information about new clients and prioritizing them for follow up. It also allows the organization to more easily report performance data to funding agencies and organizations.

“You get a good press release when you say we opened 50 beds, but what is the organization having to do to manage that?” Struss said. “Let’s make sure we’re also thinking about funding the infrastructure to make sure these groups can do that as efficiently and effectively as they can.”

Other Seattle-area technology companies and nonprofits are diving into different aspects of the homelessness crisis, as GeekWire has previously reported.

Zillow’s Community Pillar program makes it easier for people with less-than-stellar housing applications to find landlords and property managers more inclined to rent to them. Zillow employees volunteered their time to build the tool, which is part of the company’s website.

The nonprofit WeCount recently launched an app to help people make direct donations of specifically requested items to people who are homeless.

“There is so much opportunity for tech companies to help in solving homelessness — from basic operational help to large new initiatives. The Community Pillar program that we started at Zillow is an example of this,” said Rebekah Bastian, Zillow’s VP of product teams and champion of the project, by email. 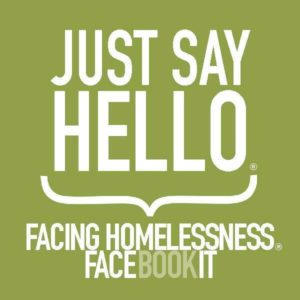 “Seattle has a vibrant tech community that is not only doing great things in that industry, but also engaging in the community,” said Todd Burley, spokesman for the city of Seattle Housing Department. “It’s great to have tech companies engaged in the issues of homelessness.”

And for his part, Hohlbein will keep using his tech platform to inspire and remind people what this issue is really about. Some 36,000 people “like” his Facebook page, which features more than 2,000 photos. He also posts on Instagram.

“Technology does have this ability — and social media specifically has a way — of gathering information and putting those issues forward,” he said. “Facing Homelessness really only exists because of Facebook.”

But it’s not enough to build websites and databases, Hohlbein said. Ending homelessness has more to do with changing ourselves and “opening our hearts” to the problem. “At the end of the day this is a human issue,” he said, “and that is where it has to be solved.”