Richard Sherman doesn’t think much of Donald Trump’s comments about concussions in the NFL.

GeekWire caught up with the Seahawks star after his appearance at an American Express local merchant event Friday in Seattle, just days after the financial giant extended its partnership with the NFL team.

Asked about Trump, who called the NFL’s rules for concussions “soft” on Wednesday during a campaign rally, Sherman initially didn’t have much to say. But given how other players have ripped Trump for the comments — TIME called it “dangerous” — and Sherman’s recent monologue about player health in the NFL, he did have one response.

“He’s as knowledgeable about that as he is about foreign policy,” Sherman said of Trump.

Earlier in the week, Sherman responded to Trump’s comments about “locker room talk,” calling it a “cop out.”

Sherman spoke on a panel Friday at the American Express small business event partly because he’s a co-owner of a new Wingstop restaurant in West Seattle. The 28-year-old, who’s involved in a number of off-the-field activities, said he’s always wanted to be a business owner.

“I want to employ people and give them opportunities for jobs, help them provide for their families,” Sherman said.

Sherman talked about where he finds inspiration — both on the football field, and off of it. He pointed to NBA Hall of Famer Magic Johnson visiting his school years ago in Compton, Calif.

“He just said, ‘don’t let your circumstances dictate your future, always reach for the stars, and don’t let anyone tell you what you can’t do,'” Sherman recalled. “I really took it to heart.”

Sherman’s path to NFL stardom didn’t come easy. From growing up in Compton to rising up the pro football ranks despite not being picked until the fifth round of the 2011 NFL Draft, he’s faced several roadblocks along the way. 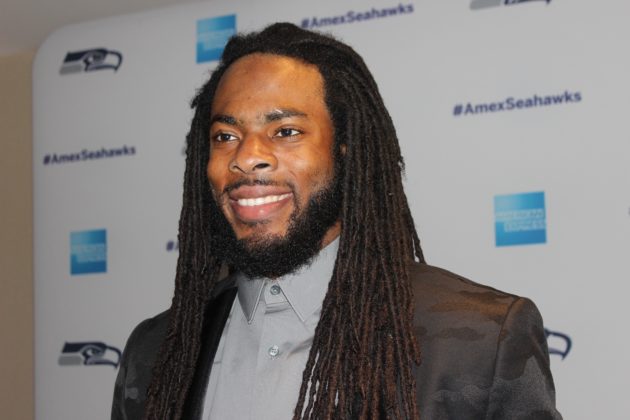 Sherman said successful people, whether it be an NFL athlete or an entrepreneur, have all battled adversity in some form or another.

Having grit is something that Sherman’s former teammate, retired wide receiver Ricardo Lockette, talked about at the GeekWire Summit earlier this month. I asked Sherman about grit, and why it can be so powerful during the tough times.

He first described growing up and being one of the worst players on his youth teams. But that didn’t stop his drive to become better — and eventually become of one of the best football players in the world.

“It’s just those moments in time where you can quit, when things get really difficult and almost impossible — but you don’t quit,” he said. “Those are gritty people. You never want to get in a fight with someone who’s gritty, because when they get hit and they taste blood, it’s not over.

Sherman also answered a few tech-related questions. Asked about using the Microsoft Surface tablet on the sidelines for the past three seasons to review past plays — versus using black-and-white paper printouts — Sherman said the technology hasn’t really changed much, strategically-speaking. But he said watching video on the tablets, which the NFL has been testing during the preseason, is different.

“That was pretty cool, actually,” he said.

His favorite apps right now, “for everybody that’s not a geek,” are Twitter and Instagram. But for “my Pokémon nerds, Pokémon Go.”