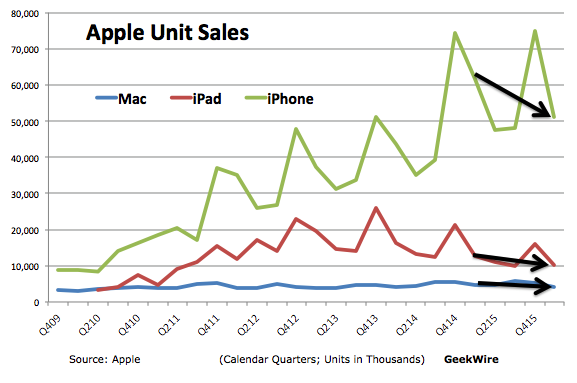 Apple’s iPad and iPhone sales declined by 16 percent and 19 percent, respectively, as the technology giant’s revenue and profits fell short of Wall Street expectations in results posted this afternoon for the March quarter.

“Our team executed extremely well in the face of strong macroeconomic headwinds,” said Tim Cook, Apple’s CEO, in the company’s earnings release. “We are very happy with the continued strong growth in revenue from Services, thanks to the incredible strength of the Apple ecosystem and our growing base of over one billion active devices.”

The results represent the company’s first year-over-year drop in quarterly revenue since 2003. Apple’s shares are down more than 6 percent in after-hours trading, reflecting the fact that the results are worse than investors were expecting.

It’s an unusual result for the tech giant, as illustrated by this list of its earnings release headlines.

During the company’s earnings call with analysts, Cook emphasized an “optimistic” outlook despite disappointing numbers and a weaker outlook. Both Cook and chief financial officer Luca Maestri pointed to a slowdown in China as a big reason for the dip in growth. During the second quarter of last year, the company saw a huge 81 percent surge in the country, so matching that growth this year was a long shot.

Cook also noted that sales of the iPhone SE weren’t included in this quarter’s results, but users may have been holding off on an upgrade for the smaller device. He said the larger screen of the iPhone 6 and 6 Plus may have altered the standard upgrade cycle, with users on a two-year plan holding off for the iPhone 7 generation to come out before upgrading again.

Growth by mergers and acquisitions was also presented as an option.

“In regards to M&A, we’re always looking for things that could complement what we’re doing,” Cook said.

The company has more than $200 billion on hand, and while most of that is held overseas, it could be used for purchases in emerging markets like India.