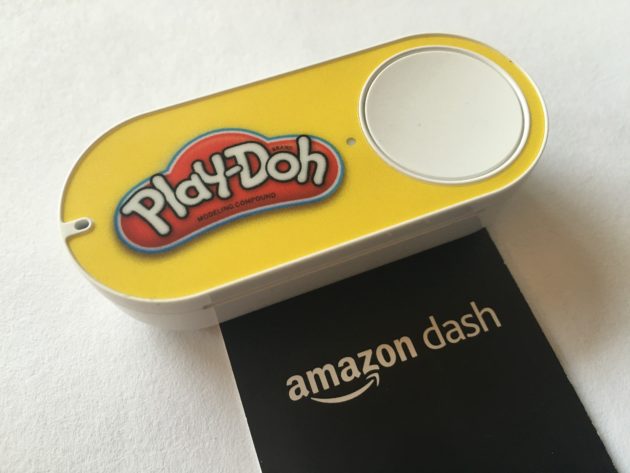 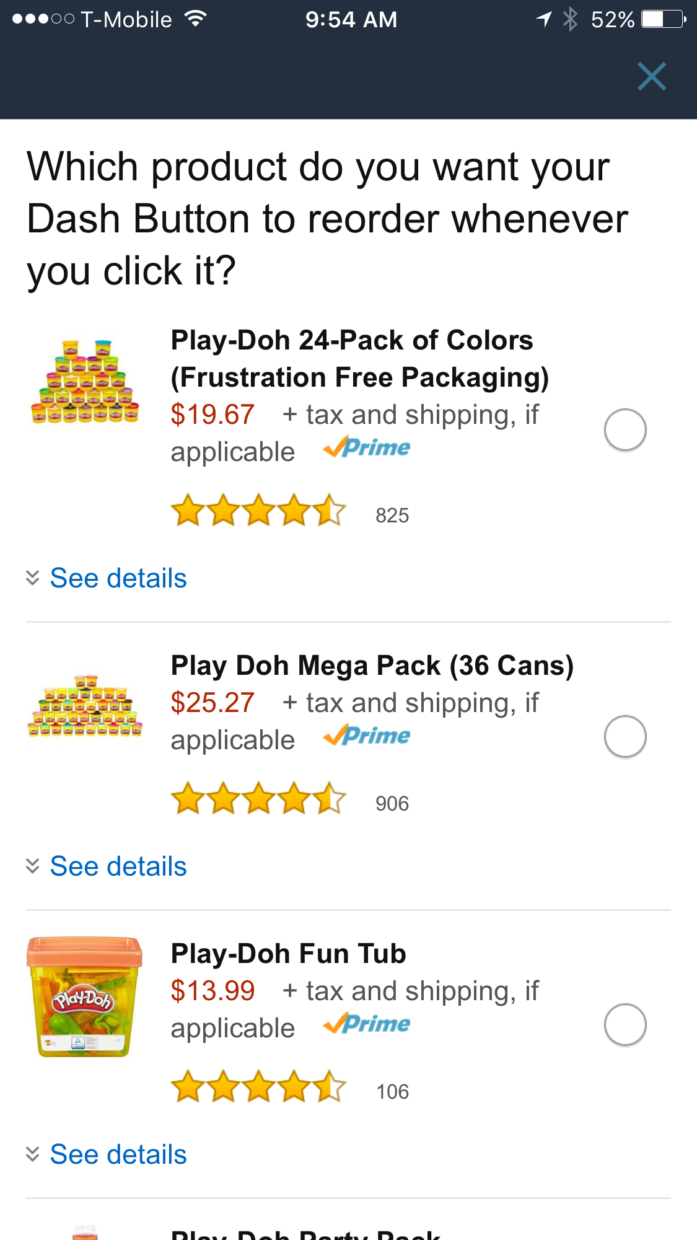 Moments after setup, my 5-year-old was fully on board with the concept of our new Amazon Dash Button, which we configured to purchase a 24-pack of Play-Doh with the press of the button, for free delivery in two days.

Personally, I’m not so sure about this.

The device, which arrived just in time for the holiday weekend, is part of an expansion into toys for the Amazon Dash program, which lets Amazon Prime members quickly reorder specific products by pushing a button. The idea is to simplify the process of purchasing household items when you notice that you’re running low.

It’s one step closer to a direct telepathic connection to your nearest Amazon warehouse — which, depending on your perspective, is either the greatest thing ever or the end of humanity as we know it.

So what’s it like? First off, the Dash Button was much smaller than I expected, a cute little device about two inches long and an inch wide. It comes with an adhesive oval on the back, allowing it to be stuck in a convenient spot for easy access. 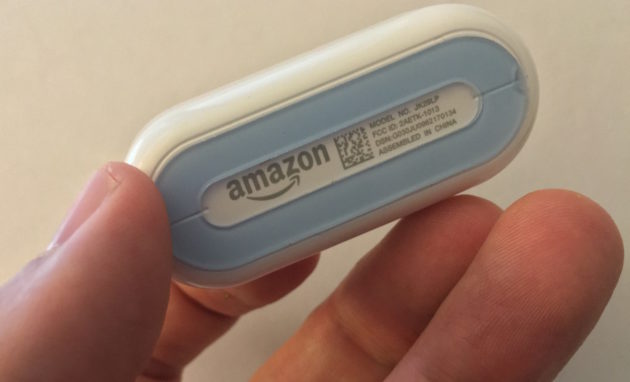 The setup worked flawlessly in my experience, although it was a little more involved than I had imagined. The process works through the Amazon smartphone app, connecting the Dash Button to your WiFi network, and then sending an audible signal from the phone’s speakers to the device to complete the setup. 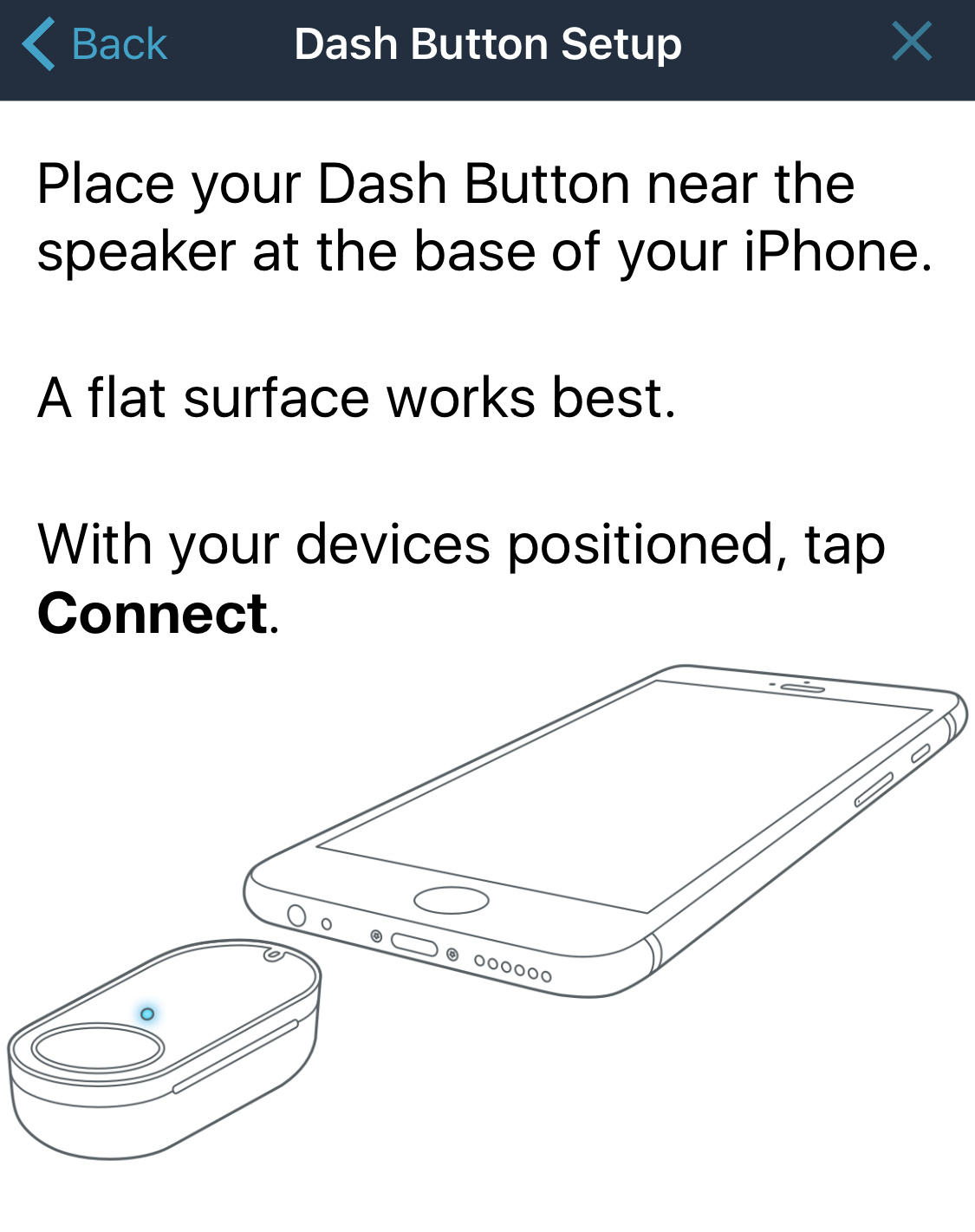 After that, you use the app to pick which Play-Doh product you want the Dash Button to reorder when pressed.

Then, when you press the button, it flashes amber a few times and then green to let you know an order has gone through. On your phone, the app sends a mobile notification to let you know that the order has been placed, allowing you to cancel it before it goes through if you made the order inadvertently.

One nice feature for parents: By default, the system prevents multiple simultaneous orders. As we learned this morning, if you have one order in process for a 24-pack of Play-Doh, and you “accidentally” press the button again, Amazon won’t put the order through unless you override the setting to allow for multiple orders. Sorry, kids. 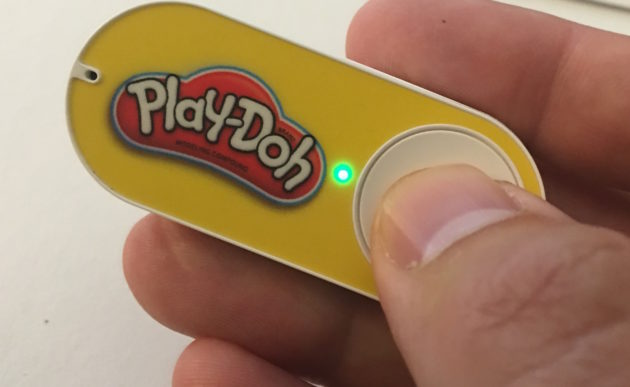 The buttons cost $4.99 each, but you get that back as a credit when you make your first order through one.

So how to feel about all of this? Sure, Play-Doh is good for hours of entertainment, and it often gets accidentally left out to dry, which is no doubt one of the key business drivers for the popular Hasbro brand.

But as a family we actually prefer the homemade variety. Beyond that, I understand the viewpoint of people who contend that this whole notion of push-button commerce is just a little too easy — part of an ill-advised new era of consumption and consumerism.

And from a practical standpoint, the Dash buttons are a bit of a novelty. Based on my initial experience, I can understand why they are ending up in junk drawers. Yes, pushing a button is the ultimate in simplicity, but it’s not that hard to simply open up the Amazon app and tap a few times to make a purchase.

Ultimately, the Dash buttons feel like an interim step. Amazon has already started integrating automatic reordering into dishwashers, washers, dryers and other household appliances that can sense when you’re running low on supplies, such as detergent, and place the order for you.

I’ll let the rest of you ponder that, while I figure out where to hide this thing.