There is one thing every geek of a certain age wanted as a child: a Star Trek Communicator. Various toy versions satiated desire for awhile, but it wasn’t until Motorola’s 1996 StarTAC that fans could hold a real Star Trek-like communications device that was more than a walkie-talkie. But now the future has arrived in near full glory with The Wand Company’s Star Trek Original Series Bluetooth Communicator.

At $150 this Communicator is not a toy, but it is also priced comparably with other high-end Bluetooth speakers and headsets that connect to your smartphone, making it a reasonable tool, not just something for display. As on Star Trek, think of this as a speakerphone — a job it does reasonably well given its diminutive size. Sound is crisp and listeners report the microphone pickup is good. Volume can be a bit of an issue in crowded spaces, so be cautious when visiting planets with loud wind or crashing waves.

The Communicator results from 3D structured light scans of the last known hero screen-used Communicator prop. But it is made better than any prop of Star Trek’s era. Wand employed CNC-machined aluminum, nickel-plated die-cast zinc, punched, pressed and welded steel, thermoplastic polyurethane rubber, AB-coated iridescent jewels and ABS plastic to make the Communicator feel authentic and legitimate right down to its digitally created surface texture that precisely mimics the on-screen prop. Unlike the recent toy versions, the rotating moiré pattern on the speaker grill swirls in mesmerizing silence.

Of course, if you do want to just display the Communicator, that is OK. It comes with a very cool microUSB-powered magnetic display stand that also charges the device wirelessly. No input ports mar the surface of the device itself.

As with Wand products like the Star Trek Phaser Television Remote Control or the Doctor Who remotes, the company has gone out of its way to pack in as many features into the device’s original buttons and grills as possible. Flipping the grill up invokes the familiar chirp. The right button, slightly outside of original device specs, has become a toggle that not only controls volume but lets users activate stock phrases from Mr. Spock, Mr. Sulu and Scotty with slight movements up, down or sideways. Uhura lives on the left button. A long instruction manual offers up guidance on less accessible sounds that require two hands to hear, like a full set of orders from Starfleet Command. 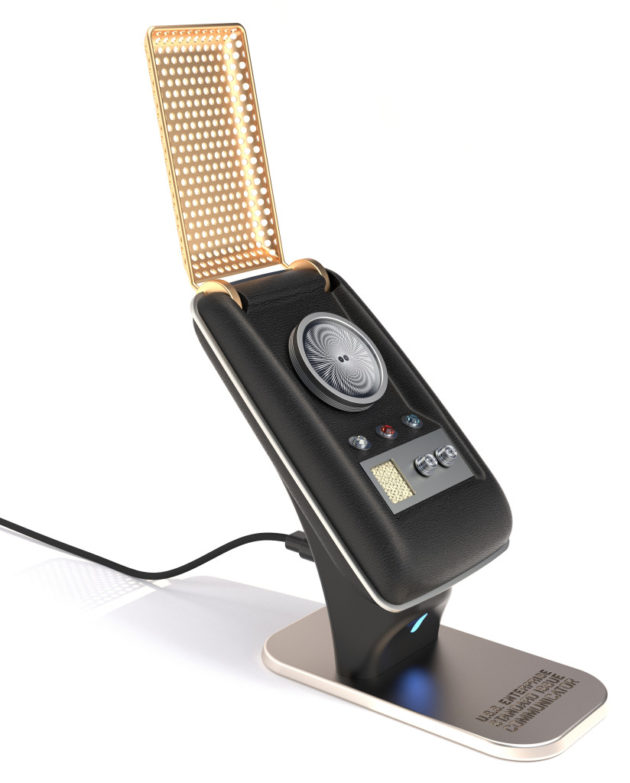 If you plan to transport your Communicator, it comes in a molded-foam-lined case made of engineering-grade polymer, emblazoned with ownership credentials from the U.S.S. Enterprise. A leatherette pouch protects the device from scratches for those who decide to take it down to Ten Forward for a drink. The only thing Wand missed was some way to attach The Communicator to a belt. Time to get out the Velcro.

The push and a long-hold on the right button places the device in pairing mode, and from there, it uses the same process as any other Bluetooth device to connect with an iPhone, Android or Windows phone. Once paired, just flip open the antenna grille to answer an incoming call. The Communicator also works as a Bluetooth speaker for iPods or other non-communicating devices.

The 23rd century arrived early, almost. As much as I love the The Star Trek Original Series Bluetooth Communicator, I have failed to establish contact with an actual starship, so no beaming up—and it doesn’t support subspace radio for faster-than-light communications. But other than that, it’s pretty damn cool. Gotta go — the away team is hailing me.

The Star Trek Original Series Bluetooth Communicator is available at ThinkGeek and StarTrek.com.

And here’s a bit of nostalgia for you.