Amazon’s second Prime Day is off and running.

As the clock struck midnight, some of the first big deals included TVs, video games and consoles and headphones. 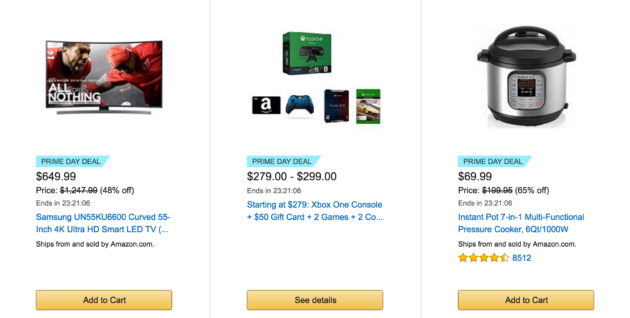 Amazon offered discounts on many of its devices, including $50 off the Alexa-powered Echo, but customers weren’t biting initially. Most of those sales were less than 5 percent claimed in the first half hour.

Perhaps the best deal to kick off the all-day sale for Prime members was an Xbox One 500 GB console with a game of the customer’s choice, a $50 Amazon gift card, a limited edition copy of Halo 5: Guardians, a special edition controller and a digital code to download Forza 2. That bundle is going for $279 and is available all day. For reference, the 500 GB Xbox One console with one game typically costs $299.99 on its own.

One lightning deal that began at midnight offered an Xbox 500 GB Gears of War bundle for $259.99. Those buyers might be unhappy when they see the Xbox-Halo-gift card deal.

Some customers complained about selection during the original Prime Day last July. So this year Amazon promised bigger and better deals, more than 100,000 worldwide. Amazon Echo, Echo Dot or Amazon Tap owners have access to special Alexa deals. In addition, Amazon said twice as many small business sellers are participating in Prime Day this year.

Initially, social media opinion was mixed on whether Amazon had lived up to the hype of its Prime Day encore. Some were happy about deep discounts on TVs, electronics and other items, while other customers again complained about the variety of deals offered.

The first Prime Day last July was the biggest single sales day in Amazon’s history as customers ordered 34.4 million items at a clip of 398 per second. The event brought in between $375 million and $400 million in revenue for Amazon, and this year’s event could double that number.

This year customers can sort through deals by categories and track individual deals through Amazon’s app. Prime members complained last year that many deals were snapped up so quickly that they didn’t get a chance to buy what they wanted.

There was plenty of doubt on social media in the hours leading up to Prime Day that this year’s crop of deals would be any better.

Others were excited for a day full of deals.

Tomorrow is #PrimeDay and my heart is palpitating

needed #essentials to get me through full day of #shopping @amazon #PrimeDay #deals @amazonprimenow 2 #rescue pic.twitter.com/jJBmKRrmYC

Shopping holidays like Prime Day are becoming more common as companies look to drum up Black Friday-like sales multiple times throughout the year. Prime Day has been likened to Chinese e-commerce giant Alibaba’s “Singles Day,” which dates back to 2009. The annual shopping celebration is every Nov. 11, and last year it led to $14.3 billion in sales.

Walmart is going head-to-head with Prime Day by offering discounts and free shipping with no minimum purchase price all week.