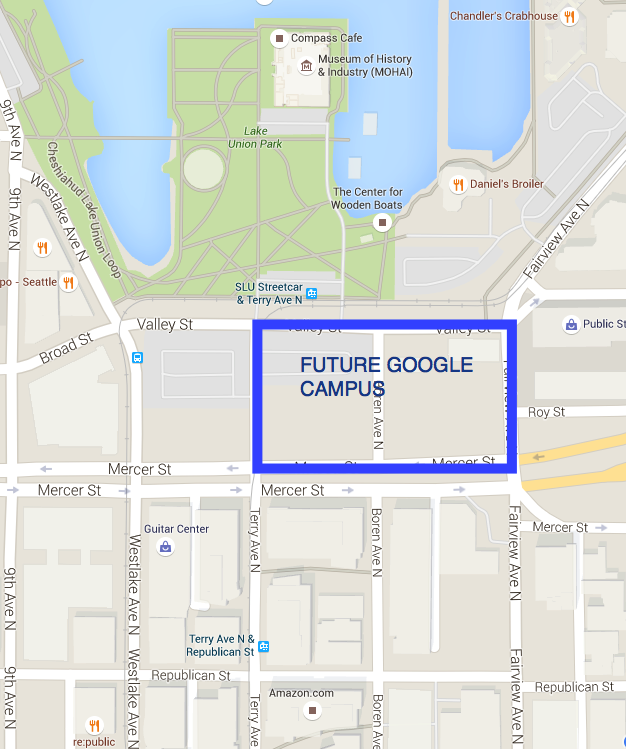 The complex, on a site most recently used for staging for Mercer Street construction, will also include residential space on top of Google’s offices, resulting in towers reaching as high as 15 stories. The buildings will include more than 600,000 square feet of office space and 151 residential units.

Construction will take place in phases, starting in 2017 and ending in 2019. Google has agreed to leases lasting 14 to 16 years, according to a Vulcan official, a new sign of its long-term commitment to the Seattle region.

Combined with Google’s recently expanded offices in Kirkland, Wash., the technology giant will be approaching 1 million square feet in the region with this new space. Google currently has more than 1,900 employees in Washington state, in offices in Seattle and Kirkland.

Google will be moving from its current location in Seattle’s Fremont neighborhood, where space has become tight in recent years given the rapid expansion of Tableau Software and other technology companies.

“South Lake Union is a thriving hub and we’re excited for our new space,” said Clyde McQueen, site Lead for Google Seattle, in a news release. “We’ve loved being in the Fremont neighborhood but will need a bit more breathing room. We’ll still catch a view of Lake Union, just from a new location.”

Apart from giving Google a larger footprint in the city, the news is notable because Amazon isn’t the one taking the buildings. Vulcan developed the online retailer’s existing campus in the South Lake Union neighborhood. Amazon has been focusing much of its expansion in the neighborhood to the south, where it is developing its own three-block campus on the northern edge of downtown Seattle.

It’s “exciting to have a new tenant in the neighborhood,” said Lori Mason Curran of Vulcan Real Estate, via phone this afternoon.

Facebook is also moving in to a new complex on the west side of Lake Union later this year, giving both Silicon Valley tech giants major new offices within walking distance of Amazon’s campus.

Google, based in Mountain View, Calif., first expanded to the Seattle region in 2004, leading a wave of Silicon Valley tech companies that have since opened engineering centers in the area, seeking to capitalizing on the pool of engineering talent coming out of the University of Washington, and companies such as Microsoft and Amazon.

SEATTLE – March 24, 2016 – Vulcan, Inc. today announced that it is working with Google to design four new office buildings in South Lake Union providing office space for the technology company. The project will be developed by Vulcan and consist of four ecofriendly buildings and landscaped open space located along Mercer Street (between Terry and Fairview Avenues N), with market-rate housing on the upper floors. The sites are on Valley Street across from Lake Union Park and Chandler’s Cove with convenient access to two Seattle Streetcar stops along the South Lake Union line.

“Google’s move to South Lake Union further solidifies the neighborhood as a center for innovation and intellectual capital,” said Ada M. Healey, vice president of real estate at Vulcan Inc. “We’re excited to contribute toward Google’s growth within one of our region’s most vibrant and exciting communities.”

The four 6-story buildings will be built in phases, with construction commencing by 2017 and completion expected in 2019. The project will include 607,000 square feet of office space for Google, and Vulcan will separately develop approximately 14,000 square feet of accessory ground floor retail space for restaurants, shops and/or services that will further enliven the neighborhood. All buildings will feature below grade parking. The design includes significant public amenities such as inviting courtyard plazas with flexible seating and pockets of open green space. There will be a pedestrian-friendly east-to-west through-block woonerf between Terry and Boren Avenues N.

“South Lake Union is a thriving hub and we’re excited for our new space,” said Clyde McQueen, Site Lead for Google Seattle. “We’ve loved being in the Fremont neighborhood but will need a bit more breathing room. We’ll still catch a view of Lake Union, just from a new location. We’re looking forward to walking, biking and riding the streetcar through the neighborhood.”

The new buildings will be targeting LEED Gold certification and Salmon-Safe accreditation. Salmon-Safe is complementary to LEED and is focused primarily on stormwater quality and management that protects and restores salmon habitats in the Pacific Northwest. Vulcan will also contribute approximately $4.3 million in incentive zoning fees for affordable housing and daycare.

Concurrent with the development of the new office space for Google, Vulcan will complete the mixed-use blocks with the construction of two residential towers containing a total of 151 units of market-rate rental apartments. Vulcan’s residential towers will rise 8 – 9 stories above the 6-story office podiums at the southeast corner of Valley and Boren Avenue N. and the northeast corner of Terry Avenue N. and Mercer St.

Graphite Design Group is designing the project and Runberg Architecture Group is consulting on the residential portion. GLY Construction is the general contractor.

Here is the fact sheet that Vulcan released about the project.