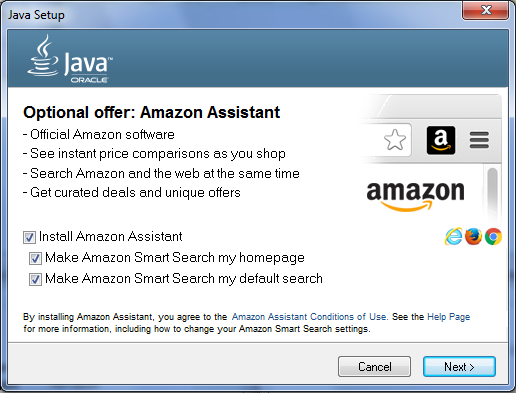 Oracle’s Java has long come with third-party sponsored offers that add toolbars to your browser and change the homepage to a partner’s site. It used to be Ask.com’s toolbar that was installed, but last year Ask.com was replaced with Yahoo, which made its search engine the default for users who failed to uncheck a small box during the installation processes.

Now, Amazon is taking over that spot, bringing its own extension and search engine to your browser with every Java install, unless you opt out.

The exit of Yahoo from the installer is notable given the company’s ongoing business struggles. Given the large number of people who still need to download and update Java, the installer is a way for a third party to quickly add to its user base.

Amazon’s extension allows users to price match against Amazon options across the web. Its search engine is powered by Google, but emphasizes Amazon products like IMDb, Goodreads and Amazon product pages.

It appears the new installation behavior started in January, but other than an FAQ page on Oracle’s site, neither company has announced the feature widely. We’ve reached out to Amazon and Oracle for comment and will update if we hear back.

Bundling Amazon’s extension and search engine into the popular programming language is already drawing ire from some users, with many seeing the extension as another form of bloatware.

java install
> do you want to install amazon assistant?
no
> ok i installed it anyway just in case
remove from chrome
> remove java? oh.. :(

Previous bundled browser add-ons from Oracle have drawn deep scorn from users, who practically forced the Java developer to include a “Suppress sponsor offers” option in the Java control panel back in 2014. The software company is likely profiting from bundling Amazon’s products in its installation, which is free to the end user.

Users can uncheck the boxes to keep Java from installing the Amazon Assistant extension and setting Amazon Smart Search as the default search engine and homepage, but the boxes are selected initially, meaning some users breezing through the setup may accidentally install them.