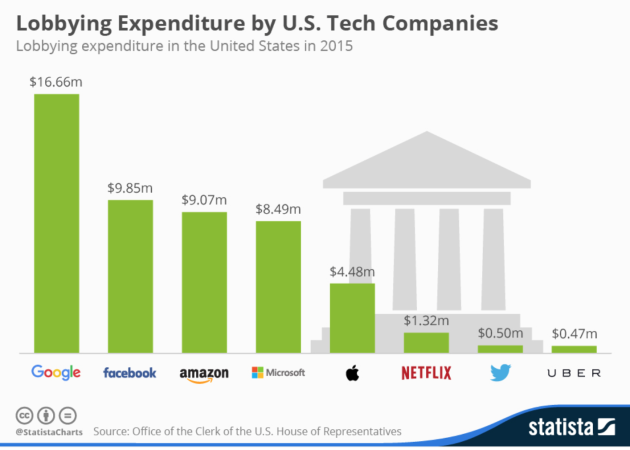 Google spent $16.6 million on lobbying in the United States, far outspending any other tech company, according to research from Statista, a internet analysis company.

The tech company that spent the next largest amount on lobbying last year was Facebook ($9.8 million), followed closely by Amazon ($9 million). Google’s competitors are unlikely to be surprised or pleased with the number. In the past few years, Google has continued to use its considerable resources on boosting the company’s profile in the nation’s capital.

If you agree with some of the positions that Google takes, such as standing against onerous patent or copyright laws, then this is ok. If you believe Google’s lobbying is enabling the company to stifle competition, as Salon suggested is happening earlier this year, then the spending is not ok. According to Wired, Facebook’s lobbying dollars are focused on making it easier for foreign-born techies to work in the United States. Amazon concentrates on trade and tax issues.

Business Insider has more on the numbers. If you’re looking to see how much money Google has dedicated to lobbying over the years, go here.