It’s not easy making the so-called “startup leap.” You may have a well-paying, comfortable job that supports your family. The amount of risk involved, both financial and emotional, can sometimes be too much for those wanting to launch a new company.

Nick Huzar was at this crossroads more than five years ago. The OfferUp CEO had already founded a few companies prior, but the entrepreneur was fixated on a new marketplace idea for buying and selling goods that would compete with existing services like Craigslist.

How did he decide to make the leap? What factors came into play? And once starting a company, what else did he need to consider?

Huzar discussed this topic during a talk at GeekWire Startup Day on Friday, offering tips to hundreds of entrepreneurs in the room about succeeding in the early stages of startup life. The CEO had a lot to say, given that he now runs a company that has raised $90 million to date and is rumored to be one of Seattle’s only “unicorns,” or private companies valued above $1 billion.

“If you have that idea, that spark, and want to pursue it — life is short and you should just do it,” Huzar said. “Just get out there and take that step. But just know that the first step is not the end. There are a whole bunch more. But you don’t want to look back when you’re old and gray and say you wish you would have done something. I encourage you, if you have the desire, to go out there and make it happen.” 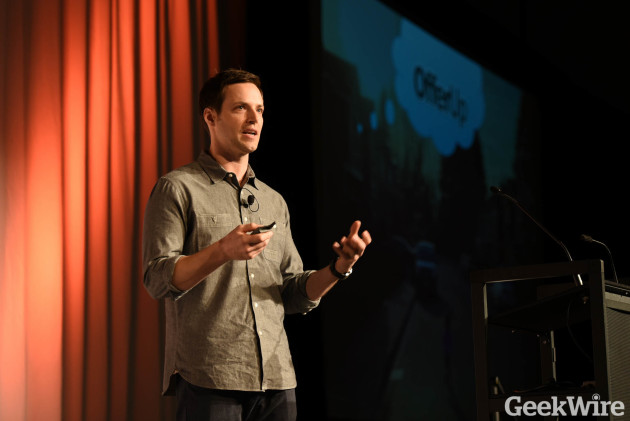 Here were some of the main takeaways from his talk on Friday:

If you can’t get that idea out of your head, make the leap

Huzar remembers standing inside his house one day, figuring out how he was going to get rid of some junk. There had to be a better, more mobile-focused way to do so than just Craigslist.

He spent five months convincing himself not to pursue the idea. But it kept nagging at him — so much so that he eventually decided to go for it.

“If you can’t get that idea out of your head and you think you have what it takes to build it, you should think about pursuing it,” Huzar said today. “If you have that desire, listen to that inner voice.”

Huzar warned that just because you have an idea, doesn’t mean you should launch a startup. You need other skills and support — a co-founder and a good life partner, for example — that help you along the startup journey.

“Everyone has ideas,” he noted. “If that is all you bring to the table, that is not going to get you there.”

After getting over the excitement of launching a startup, reality may set in: This stuff isn’t easy, especially when resources are limited early on.

To make things easier on himself and OfferUp, Huzar said he obsessed over how he spent his time.

“One thing I knew I could do was hustle,” he said. “I spent every minute doing something to move the business.”

Network your butt off

On that point of using your time wisely, Huzar said he spent countless hours networking. It may feel like a waste of time, but going out and meeting as many people as possible will help your company grow, he said.

“Building a big company takes a lot of resources — you need investors, advice, people to build,” he said. “I would go to every event I could possibly go to and talk to so many people. You only need that one investor to believe in you, and that may lead to another, or another employee.”

Huzar stressed that one of the more important things early-stage startups can do is “obsess over the product experience.”

“Sometimes people underestimate what it takes to do that,” he said. “Once you have a product, you need to figure out how to scale.”

Not all of your experiments will work. OfferUp tried a number of marketing strategies to drive user traction, like handing out balloons from the back of a truck. That didn’t go so well.

“I ended up launching a woman out of the back of that truck,” Huzar recalled. “That was the low of the low. We had no traction, little capital, and I just launched someone out the back of a truck. At that moment, I was like, ‘well, I don’t know if we can do this.'”

Early on in the startup life, it may seem like everything is against you. You will face many, many struggles and make mistakes — like having people fall out the back of a truck.

Huzar also told a story about how his wife’s boss at the time would call her the “sugar momma” of the family, since he wasn’t bringing any income in and had no traction.

“Those are things you have to overcome early on,” he said. “Just be persistent and believe in what you are doing.”

“You need to find a co-founder where you have that yin-yang scenario — someone who is opposite of you in many ways,” he said.

“We are all different — that’s what makes good companies,” he explained. “You want to be able to challenge each other.”

Huzar also advised to not just “take anyone” when interviewing. Be patient and wait for the right fit.

“Obsess over the right people,” he added.