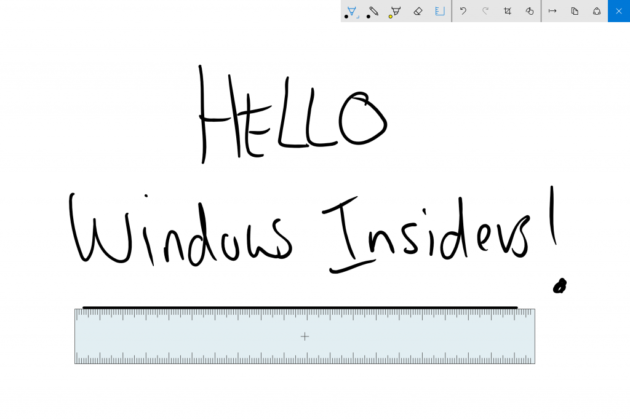 The newly available feature allows users to make powerful drawings on top of any screen throughout Windows 10. We first got a look at Windows Ink back at Build last month, where Microsoft showed off how users can take advantage of the powerful annotation option.

On of the neatest features showed off during that demo was Ink’s awareness of what users were drawing on. So if a user is annotating a topographical map, lines and markings will stick to mountains and valleys even as the user rotates the 3D map.

Ink also lets users start taking notes without unlocking their device, which means it is easier to quickly jot down an idea. Another Ink feature lets Cortana read handwriting so she can help users find notes wherever they are on a device.

The latest Windows 10 build for Windows Insiders contains some other big features coming to the Anniversary Update, set to roll out publicly this summer. Along with Windows Ink, testers can also get to Cortana from the lock screen, try out the less cluttered Start Menu and access an improved Action Center.

The Cortana improvements may get the most use. Now that Cortana is available without unlocking the device, users can access the virtual assistant much more quickly for all kinds of tasks. Cortana is also getting deeper file search — the ability to dive into OneDrive — and has better knowledge of all Windows 10 devices a user owns. So if the battery is running low on a Windows 10 tablet, Cortana can tell the user on the desktop so they’re not stuck with a dead device on the commute home.

The Action Center overhaul also has some welcome improvements. Users can customize quick actions for the ones they use most. Cortana notifications also appear in the Action Center, allowing you to snooze or review them.

The Windows 10 Insider Preview Build 14328 is available today for both PC and mobile devices. Microsoft warns that this is a pretty rough build, so users may want to switch to the slow ring if they are looking for something more stable.