Minecraft, the wildly popular game that lets users create infinite worlds, is undoubtedly on many students’ minds as last days of the school year approach. Soon they’ll be free to play all summer long — and in a surprising twist of fate, some of their teachers will be engrossed in Minecraft, as well. 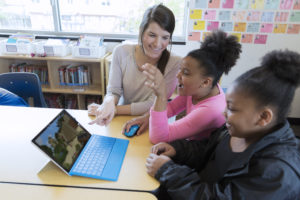 Mojang, the Microsoft-owned maker of the game, announced Thursday that an early version of the new Minecraft: Education Edition will be free for educators until the official release in September.

In May, Mojang hosted a beta of over 2,000 students and teachers and made some upgrades to the game based on user feedback. The version of Minecraft: Education Edition available to educators now includes improved classroom collaboration, non-player characters, and features that let students capture and document their work.

Thanks to the updates, a classroom of up to 30 students can play in the same world without requiring a separate server. Students can also work together in smaller groups by joining other classmates’ worlds.

Educators can enter worlds as non-player characters to guide and observe students. They can also use virtual chalkboards to communicate instructions and feedback. Teachers unfamiliar with Minecraft can get started using sample lessons, like “Effects of deforestation” or “Exploring factors and multiples.”

Microsoft is also developing new features for the game, such as teleporting and chat capabilities.

In January, Microsoft purchased MinecraftEdu — a version of the game designed for the classroom — to expand the reach of Minecraft further into education. Prior to the acquisition, GeekWire contributor Frank Catalano wrote about Minecraft’s powerful capabilities as a tool for educators, particularly those teaching STEM disciplines.

The complete Minecraft: Education Edition will be on sale in September for $1 to $5 per student, per year depending on factors including school size and volume licensing deals. The game is available for teachers with an Office 365 Education account here.