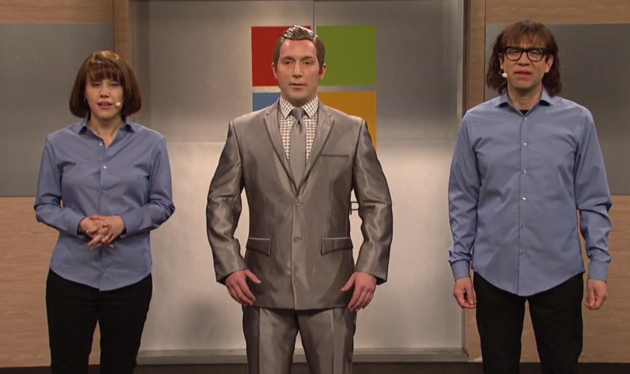 Microsoft has made it (again).

The Redmond software giant landed a skit on NBC’s “Saturday Night Live” this week, spoofing the company’s efforts to be politically correct with a pair of very gay robots.

In the skit, Kate McKinnon and Fred Armisen play Microsoft execs showing off a snazzy new “robotic employee” who likes the fellas. Casey Affleck, SNL’s host for the week, questions the need to program Helix 900 and Helix 950 with homosexuality, to the shock and disdain of the Microsofties.

“So you don’t mind gay robots, as long as they don’t talk about being gay?” McKinnon asks.

“I’m sorry, Cindy, are we still in the stone age?” Armisen chimes in.

The skit pokes fun at Microsoft’s misadventures in the chatbot world. Earlier this year, the company had to shut down its millennial-minded chatbot “Tay” within 24 hours of release because she picked up some racist tendencies. Earlier this month, Microsoft launched a second, more secure chatbot named “Zo.”

Catching the attention of SNL is the latest sign that Microsoft “got cool again” under CEO Satya Nadella’s new regime.

Watch the skit below: