A new survey of more than 55,000 coders shows Mac OS X distancing itself from Linux in a ranking of the most popular desktop operating systems for software developers, with Apple’s desktop environment chipping away at the lead Microsoft once held solidly.

The Stack Overflow Developer Survey asked visitors to the developer-focused question-and-answer site about everything from education and job stability to favorite development environments and how often they commit code changes. The results paint a broad picture of what developers do and who they are in 2016.

When combining Windows 10, Windows 7 and other versions of Microsoft operating system, Windows is still the top OS with more than 50 percent of surveyed developers. However, that lead is eroding. The operating system question looked at which desktop OS is used by developers, not which operating systems they develop for, although there is often a natural correlation between the two.

“Last year, Mac edged ahead of the Linuxes as the number 2 operating system among developers. This year it became clear that trend is real. If OS adoption rates hold steady, by next year’s survey fewer than 50% of developers may be using Windows,” the report said.

The strength of the Windows development community is more obvious in other parts of the survey data. For example, Windows-only development environments Notepad++ and Visual Studio are tied for the most-used systems in coding.

However, Microsoft is also creating a lot of frustration. Microsoft’s Visual Basic remains the “most dreaded” language. Stack Overflow found that nearly 80 percent of developers (still) coding in the language have no interest in continuing that pursuit.

On the other hand, Swift, the Apple-born, open-source language, is the second most-loved language and may point to one reason users are switching away from Windows. And while Swift and Visual Basic both reached toward the extremes of human emotion, neither appeared in the “Most Popular Technologies” category, which was led by JavaScript. 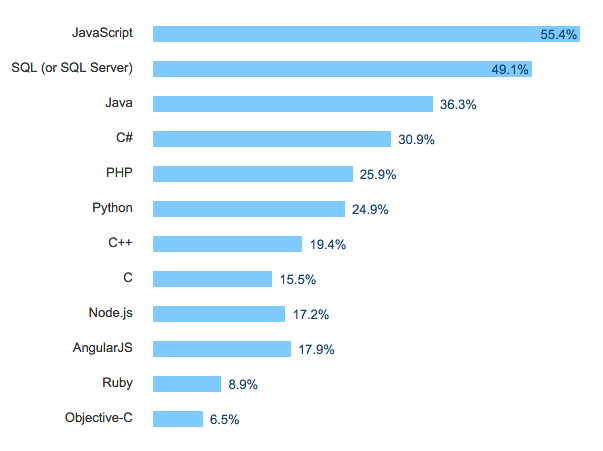 Stack Overflow’s survey didn’t just look at what developers are using, but also examined the people behind the code, or at least the developers who visit Stack Overflow.

More than a quarter of those surveyed were full-stack web developers and nearly 70 percent said that they were at least partially self-taught. But the more interesting demographic data in the survey surrounds diversity.

The survey also looked at gender, and while it found that just 5.8 percent of respondents were female, it doesn’t think that those results reflect the actual demographic breakdown of developers.

“According to Quantcast, about 12% of Stack Overflow’s readers are women. (We don’t actively track gender internally.),” the report said. “We also know this survey underrepresents people in countries where developers have an increased likelihood of being women such as Asian countries like South Korea, India, and China.”

You can head over to Stack Overflow to check out all the data and see more stats on employment status, average years of experience and other survey results.