Car ownership will end by 2025 and a majority of Lyft rides will be in fully autonomous vehicles within five years.

Those are two predictions that Lyft co-founder John Zimmer made in a long Medium post he published on Sunday that outlines his company’s vision for the next decade and beyond.

Titled “The Third Transportation Revolution,” Zimmer wrote that personal car ownership in the U.S. will be eliminated by 2025 as people rely on fleets of self-driving car networks like the one he predicts Lyft will operate.

The end result will be more efficient cities and money saved for consumers. Zimmer described the car as a “$9,000 ball and chain that gets dragged through our daily life.”

“Every year, more and more people are concluding that it is simpler and more affordable to live without a car,” he wrote. “And when networked autonomous vehicles come onto the scene, below the cost of car ownership, most city-dwellers will stop using a personal car altogether.”

Thanks to its partnership with General Motors to launch an on-demand network of autonomous vehicles, Zimmer said that “within five years a fully autonomous fleet of cars will provide the majority of Lyft rides across the country.” It’s part of a three-phase self-driving plan for Lyft, starting with “autonomous fixed routes” before ultimately having a fully autonomous network by 2022. 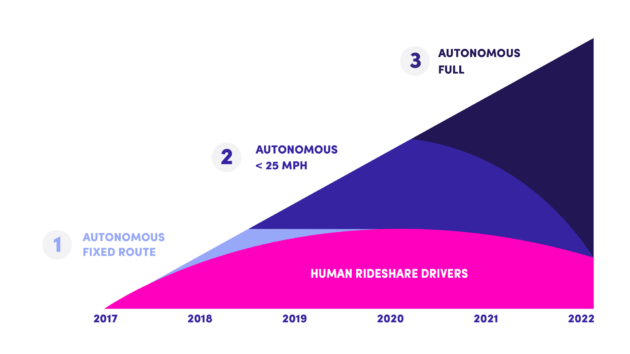 Lyft’s vision for an autonomous vehicle network is similar to that of Uber, its main and larger competitor, which is also quickly rolling out self-driving technology.

“Ridesharing is just the first phase of the movement to end car ownership and reclaim our cities,” Zimmer wrote. “As I mentioned before, the shift to autonomous cars will expand dramatically over the next ten years, transforming transportation into the ultimate subscription service.”

The New York Times reported in August that Lyft, which has raised $2 billion, had reached out to a bevy of companies in hopes to be acquired — including tech giants like Amazon, Apple, Google, and even Uber.

Its attempt to find an acquirer illustrates growth difficulties Lyft is facing as it competes with Uber, which is now valued at $68 billion and just sold off its China business to Chinese ride-hailing giant Didi.