Robots, crickets, and Washington’s future engineers took over the ShoWare Center in Kent, Wash. this weekend.

Washington FIRST Robotics held two competitions on Saturday at the Western Washington State Championships on Saturday, as more than 1,000 students ranging from 6 to 18 years old battled with their respective robotic creations.

FIRST Lego League (FLL), a program that encourages students ages 9 to 14 to design and develop a Lego robot based on a real-world problem, hosted 30 of 120 Washington-based FLL teams on Saturday. To earn points, the teams competed against each other with autonomous robots in the “Robot Game” and showed off their Trash Trek project, which asked students to develop creative ways to collect, sort and reuse trash.

Entomophagy, or eating insects, was the Bearded Pineapple’s solution to the Trash Trek challenge. Crickets decompose quickly and are better for the environment than meat and bone scraps, and have the lowest “yuck-factor.”

The Bearded Pineapples say eating crickets isn’t so bad — in fact, they encourage it.

“It tastes like peanuts and chicken,” said Ashley, a 12-year-old member of the FLL team.

Washington FIRST Robotics, a non-profit organization with more than 11,000 actively involved students and 6,000 volunteers, mentors and coaches, also held its FIRST Tech Challenge (FTC) this weekend, inviting 32 teams who competed for a spot in the Super-Regional Championship. FTC challenges seventh through twelfth graders to design, build, program and operate robots using a standard robotics kit that can successfully complete a game.

This year’s game was called RES-Q and was designed to imitate a mountain rescue. Each robot scored points by “resetting rescue beacons; delivering rescue climbers to a shelter; parking on the ‘mountain;’ and parking in the rescue beacon repair zone,” according to the FTC national website. Teams won extra points if their robot could pick up debris and place them in specific goals, or if it could hang from a pull-up bar at the top of the “mountain.”

“It comes down to who has practiced more and has refined their strategy,” said Jesse Sershon, a freshman at Edmonds Heights High School and member of Atomic Robotics.

Both the FLL and the FTC teams were judged based on three categories: their independent project (their robot or Trash Trek solution), the results of their match, and their core values.

Kellie Essig, communications director at Washington FIRST Robotics, said that even though the teams are competing against each other, the point of FIRST is to build each other up. That’s why the FIRST philosophy is about “cooperation.”

“There’s not trash talk here like you might have on a football field,” Essig said. “We all, as professionals, need to learn to work as part of a team.”

Ulrike Kornstaedt, research scientist and coach of the Weasel Eggs, decided to create a FLL team after not she couldn’t find a team for her son.

“There were days when I was pulling off every hair I had, but when it all comes together, building a team and really working hard, they enjoy it,” she said. 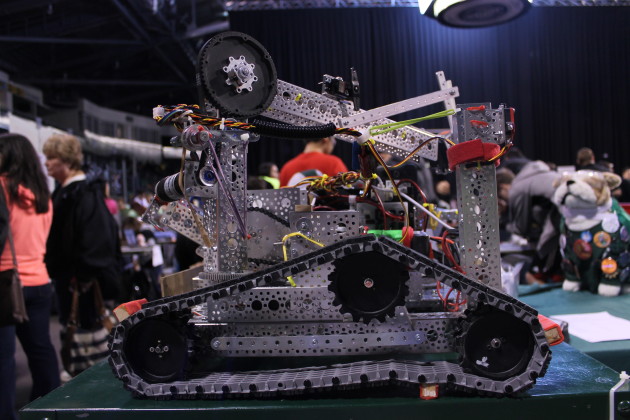 Her husband, Leif Kornstaedt, coaches the Bearded Pineapples. He said he pushed for an all-girls team because of the importance of getting girls interested in STEM-related subjects, even as early as elementary school.

“I found that starting in high school is too late — the gap really starts in fourth and fifth grade,” Kornstaedt said.

He added that coaching and judging FIRST competitions gives him valuable insight into his own career as a developer at Microsoft.

“It gives me such a better perspective on the whole thing,” he said. “I learn so much myself and at the same time, I can give back.”

The Bellevue Bellebots, an FLL team, won first place this weekend and advanced to the Super-Regional Championship as the Western Washington state champions. Fix It, the only team from Canada, scored the most points overall in the FTC and will also advance to the next round.