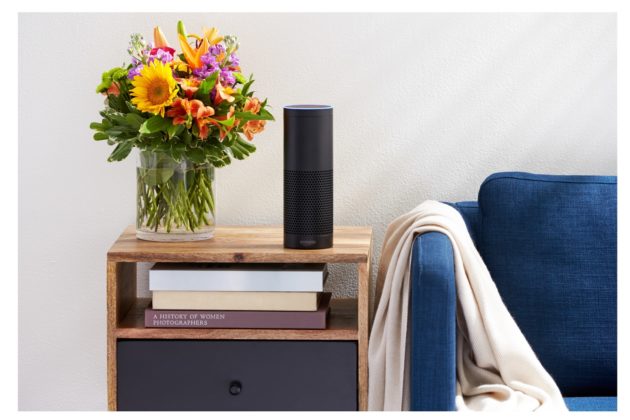 “We do have people at Amazon thinking about that,” he told Walter Isaacson, president of the Aspen Institute, at the Vanity Fair New Establishment Summit in San Francisco today.

In response to a question from a physician in the audience, Bezos said that he could see uses for Alexa at the hospital and in the home, for help with medical compliance and other treatment tasks.

“I think health care is going to be one of those industries that is elevated and made better by machine learning and artificial intelligence,” he said. “And I actually think Echo and Alexa do have a role to play in that.”

But Amazon doesn’t yet have a specific plan to bring Alexa to the medical world, Bezos said.

“It would be going too far to say that we have worked out a vision,” he said. “We’re working on having a vision in that arena because I do think it would be very helpful. … The medical care system is so big, no one company can do this. It has to be that you provide tools, and then hospitals and doctors and nurses and so on use those tools to improve health care.”

Alexa came up several times during the fireside chat. Bezos punted on a question about how Alexa stacks up against Apple’s Siri. “I don’t know a lot about the internal operations of Siri,” he said.

Bezos did note, however, that Amazon’s virtual assistant is continuously learning from her users.

“The brains of Alexa are in the cloud, they’re not on that little device,” he said, explaining how they’re able to continue improving the technology remotely.

Isaacson couldn’t resist asking Bezos if Alexa was always listening to the conversations around her, gaining smarts on customers for Amazon’s benefit. Bezos responded with a resounding “no,” explaining that Alexa only begins listening when she hears the wake word (which is “Alexa,” unless users make a change in their settings).

But is it possible to hack into Echo devices to eavesdrop on users? Bezos said Amazon’s engineers have thought about that.

“One of the great issues of our age is going to be privacy,” he said. “People don’t think about it, but if you have a mobile phone in your pocket, it has microphones on it, and those microphones are under software control. I would posit to you that just about any nation-state in the world worth its salt can put a computer virus on your phone anytime they want, and listen to anything you say on your smartphone.”

To guard against that, Amazon Echo has a hard-wired mute button. “That mute button is connected to the microphone with analog electronics. … You’d have to come physically tamper with the device, you couldn’t do it with a computer virus,” he said.

Bezos said Amazon is using artificial intelligence for much more than Alexa.

“We’re doing everything with it,” he told Isaacson. “We’re grading strawberries with it for Amazon Fresh. Cameras look at the strawberries, and we can now outperform humans on strawberry grading. I give you that tiny example to show you that artificial intelligence and machine vision and natural language understanding, these kinds of amazing things that just 10 years ago were science fiction, are going to be very helpful everywhere.”

Check out the full talk from Vanity Fair: