Amazon billionaire Jeff Bezos served as launch commentator today for a risky but successful third flight of Blue Origin’s New Shepard rocket ship to space and back. He even worked in a reference to his lucky cowboy boots.

The 11-minute-long suborbital mission not only featured the first ride for university research payloads, but also a quick restart of the propulsion module’s hydrogen-fueled BE-3 rocket engine, just seconds before what would have been a crash.

That maneuver was aimed at “pushing the envelope” for the uncrewed New Shepard’s performance, Bezos said on the eve of today’s flight. Blue Origin reported that the restart was executed successfully at an altitude of 3,635 feet, as planned.

The running commentary on Twitter marked yet another role for the 52-year-old Bezos, who founded Blue Origin back in 2000 to follow through on his childhood dream of spaceflight. New Shepard is named after Mercury astronaut Alan Shepard, who became the first American in outer space three years before Bezos was born.

Bezos traced the preparation of the crew capsule (CC) for launch from Blue Origin’s test facility in West Texas, then the liftoff, then the status of the propulsion booster and crew capsule after the two parts of the spacecraft separated on cue:

Liftoff and New Shepard is climbing to apogee. @BlueOrigin

We’ll share mission video including aerial as soon as we’re able to get it processed.#GradatimFerociter @BlueOrigin

The flight thus marked the third time that the same reusable New Shepard craft went beyond 100 kilometers in altitude to reach outer space, and then made a safe vertical landing. The test followed similarly successful outings in November and January.

This time around, the craft’s crew capsule contained an experiment from the University of Central Florida, aimed at studying impacts between objects in zero-G; and from the Southwest Research Institute, designed to simulate the dynamics of rocky soil on small near-Earth asteroids. 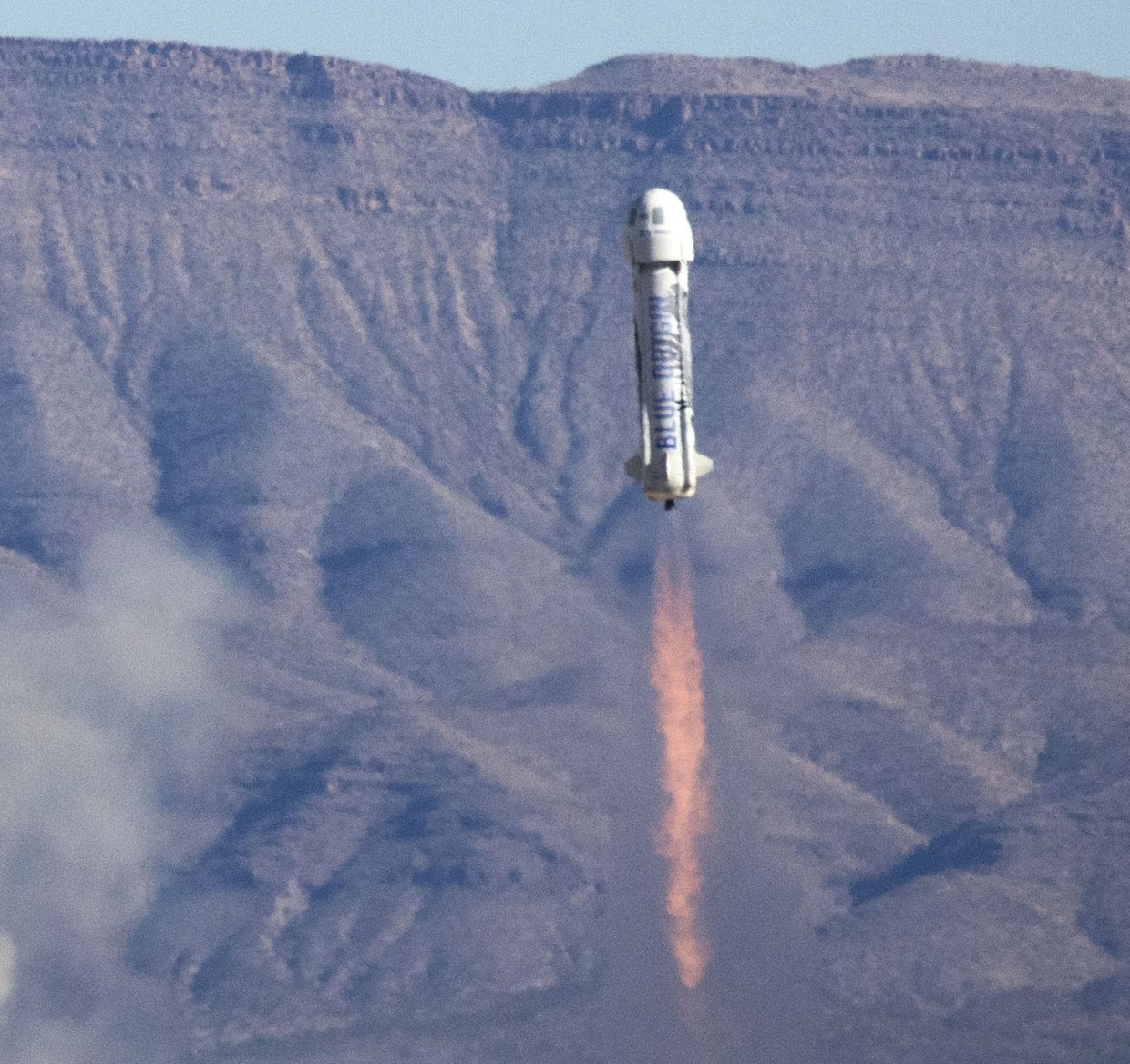 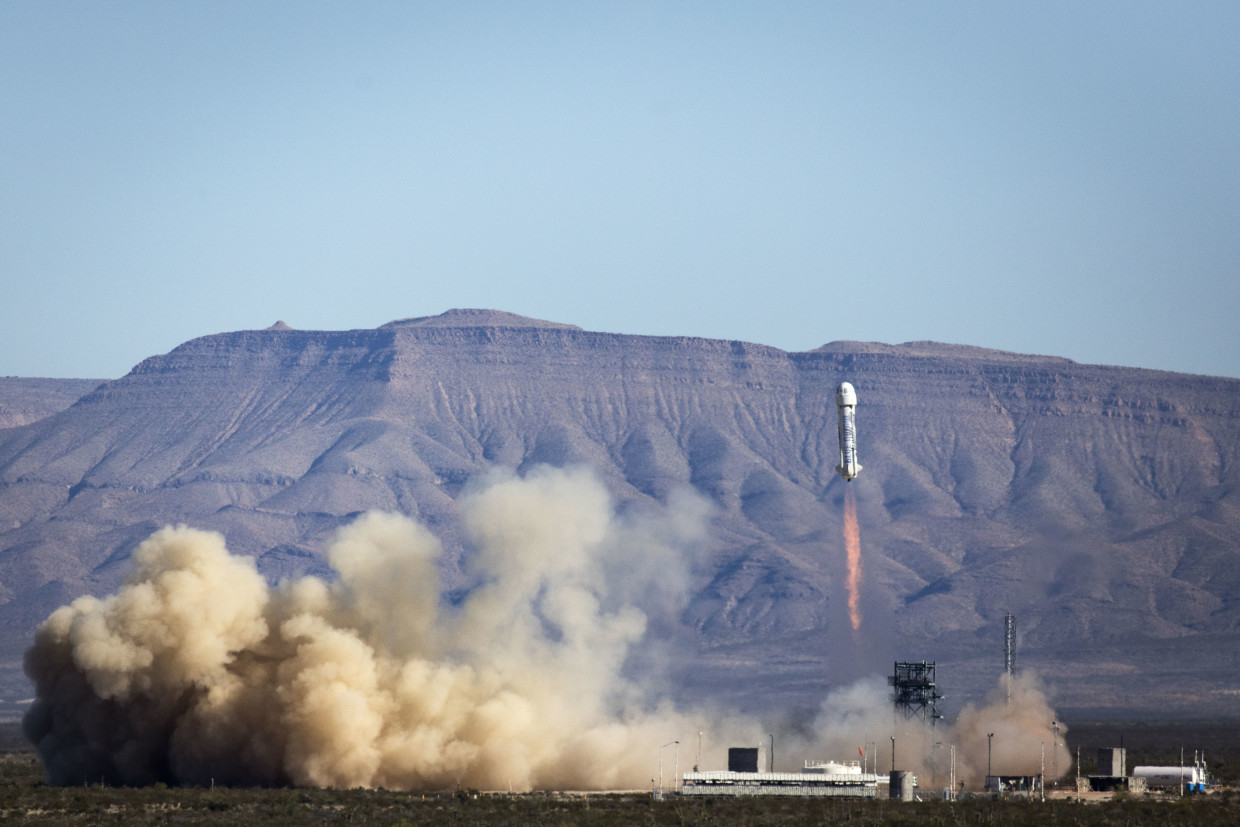 A wide shot shows the scene at the Blue Origin launch site during the liftoff. (Credit: Blue Origin) 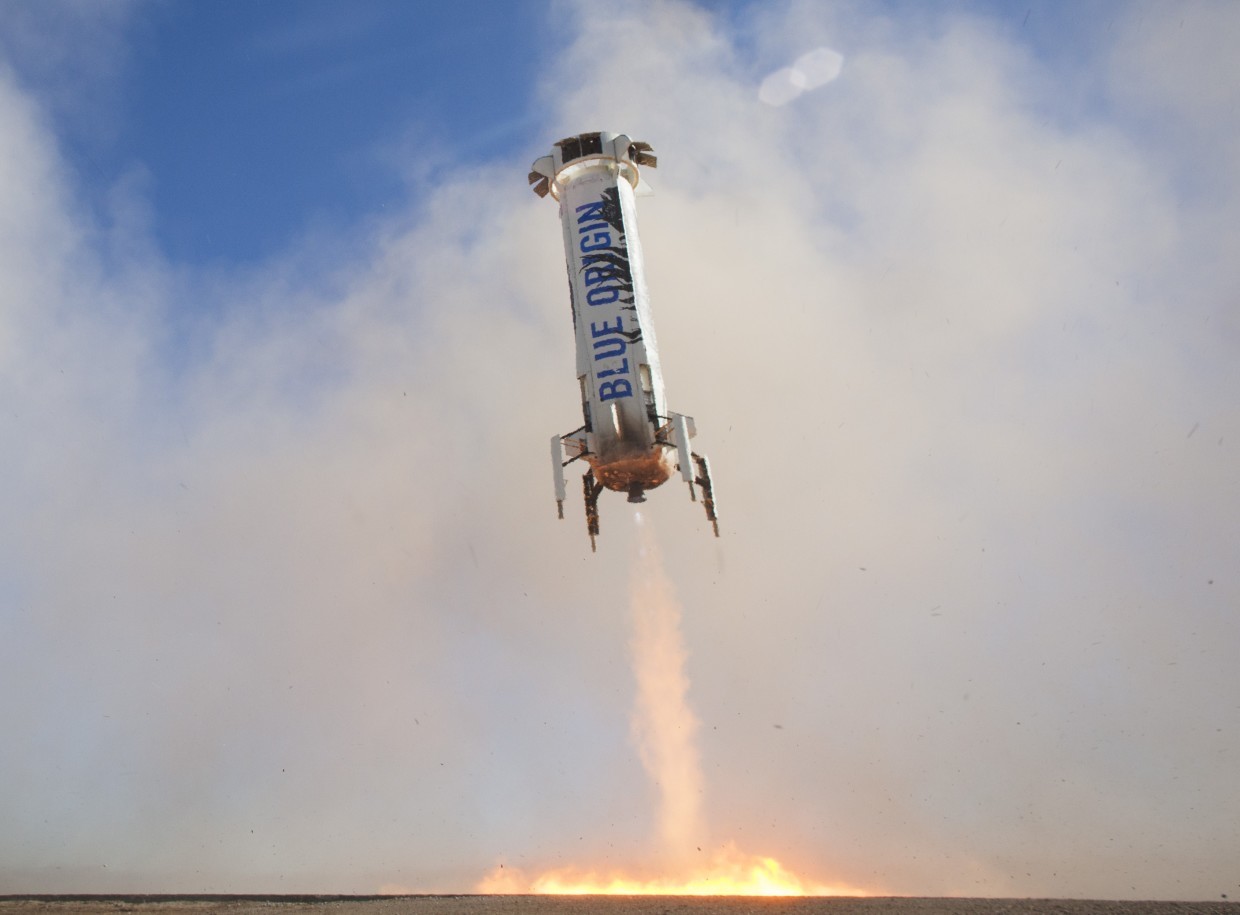 The propulsion module makes a successful landing at the end of the flight. (Credit: Blue Origin) 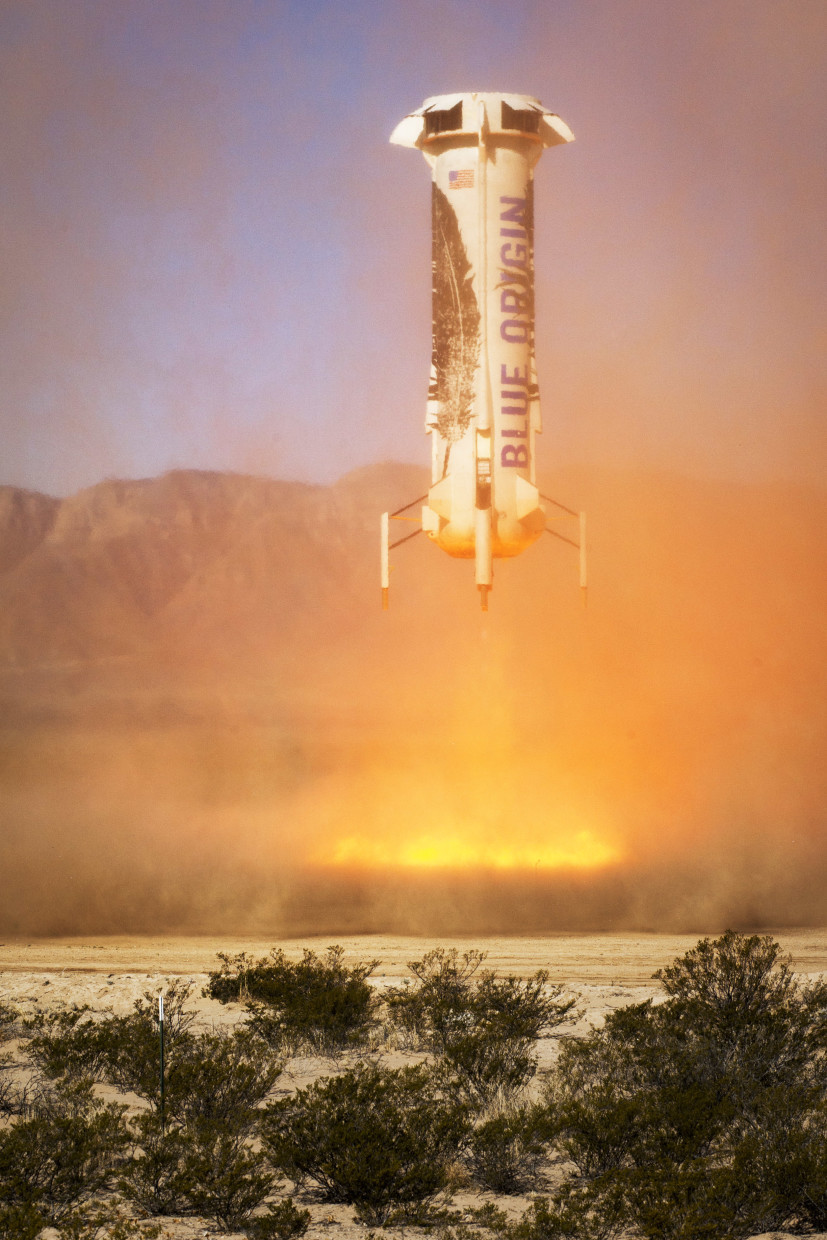 The rocket blast glows red as New Shepard settles down for a landing. (Credit: Blue Origin) 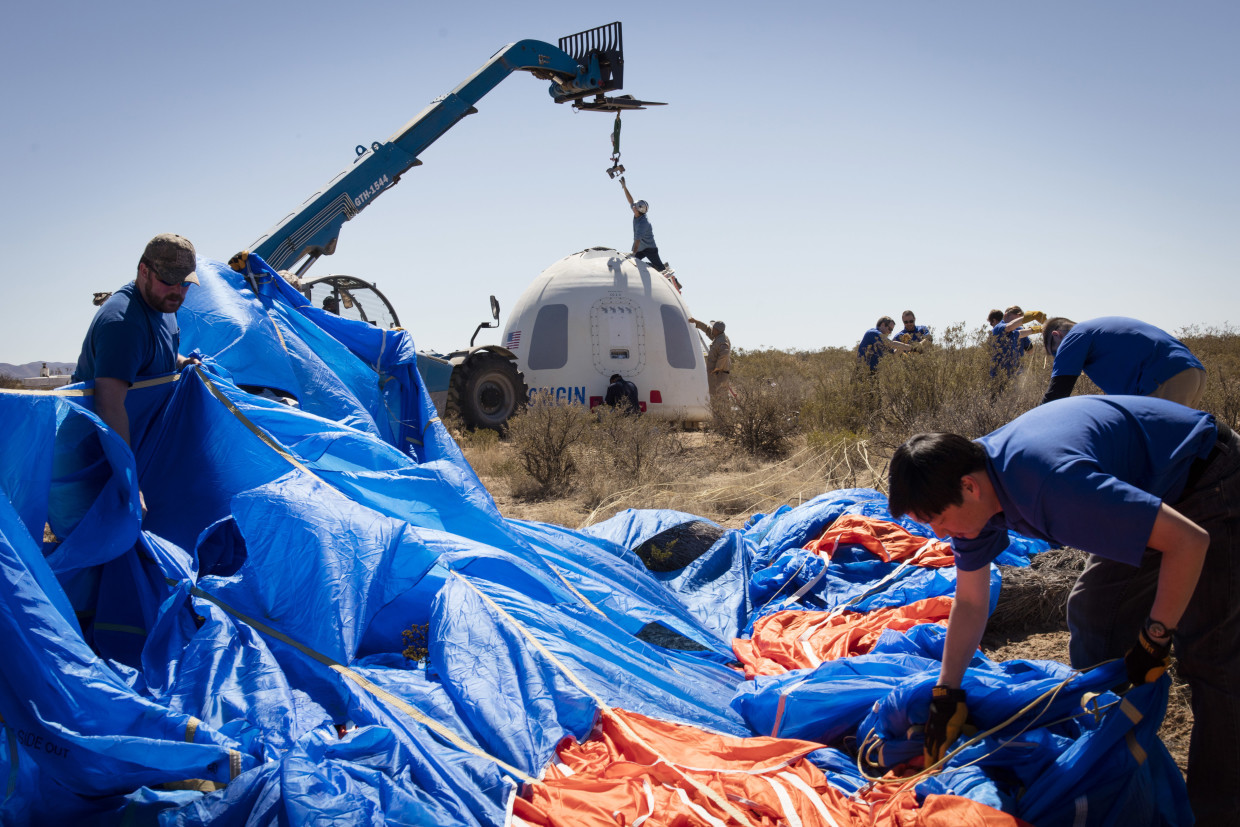 Blue Origin is headquartered in Kent, Wash., south of Seattle, but the launch site is on Bezos-owned property amid sparsely populated ranchland of West Texas. Because Bezos shared the schedule for today’s launch, onlookers were able to keep watch for the flight from afar. One of those onlookers, public-radio reporter Travis Bubenik, shared what he saw. (Go full screen for the clearest view.)

Another @blueorigin launch! Still waiting on rocket and capsule to return to Earth pic.twitter.com/m6HAibwRgG

MASSIVE boom just before I hit record – I'm assuming this is the rocket landing but I don't know for certain. pic.twitter.com/FAdfksNrnZ

Here's the @blueorigin capsule parachuting back to Earth. pic.twitter.com/0yVFRj7Zcv

Another view of the launch came from airline passenger (and TV sports commentator) Andrew Siciliano:

About an hour ago…@blueorigin rocket launch over Texas, as seen from @united 1999. pic.twitter.com/AUV9tkrDED

If all goes according to plan, Blue Origin will continue to fly research payloads, and then advance to flying test passengers. Such tests would clear the way for the company to begin sending paying passengers on quick trips to outer space and back as early as 2018.

Blue Origin has not yet determined how much the tickets will cost, but Bezos said last month that many thousands of people have signed up online for updates.