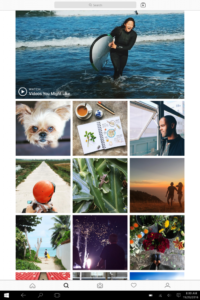 The Instagram Windows 10 version for PCs and tablets was announced Thursday evening, and it includes all the popular photo sharing app’s key features, including: capturing and editing photos, Instagram Stories, Explore and Direct. The app also has Windows-specific live tile features, like the ability to see new photos and notifications from a device’s home screen.

The app is now available on the Windows Store, and it boasts more than 500 million users. Bringing Windows 10 PCs and tablets into the fold could increase that user base significantly. Microsoft said last month Windows 10 has reached 400 million active devices 14 months after its release.

Some PC users won’t get the full effect of Instagram. Started as a mobile app before it was acquired by Facebook in 2012 for $1 billion, Instagram requires a touch screen and rear-facing camera, something not every PC has. Windows Store advises that some devices running the app “may not support certain features, like the ability to capture and upload photos and videos.”

Instagram launched its first Windows app in 2013, but it hadn’t been updated much until April. That update, available just to Windows 10 Mobile users, finally brought video upload support to Windows users.

That April update also included Instagram’s debut on the Windows Universal Platform, a common app platform that allows developers to build apps compatible with every device running Windows 10. That means the next step for Instagram and Windows 10 could see the app come to Xbox or even HoloLens.