Women make 76 cents for every dollar men earn. This frequently cited statistic points to a galling discrimination problem in the working world. But does it tell the whole story?

Although most people acknowledge that some form of gender discrimination is causing this gap, many don’t see evidence of it in their own workplaces. Men and women clearly get paid differently for equal work, but it can be difficult to pin down where this problem starts and what causes it.

A comprehensive new study from Glassdoor provides some answers. The jobs and workplace data company has published a report, titled Demystifying the Gender Pay Gap, which takes a closer look at the disparity between men and women’s salaries. Glassdoor “adjusted” its calculations for factors such as worker age, occupation, industry, experience, and education. Researchers then compared those numbers with “unadjusted” pay gap statistics that are traditionally cited.

That “unadjusted” average pay gap, based on U.S. census data, is 24.1 percent (or 76 cents for every dollar). When Glassdoor factored in education, experience, industry, occupation, location, company, job title, and year, the gap fell to 5.4 percent. 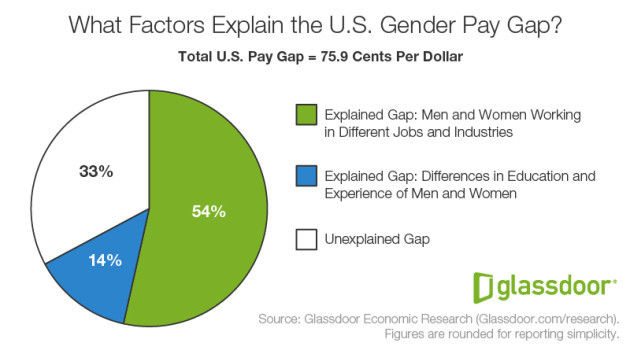 Does this mean gender discrimination in the U.S. isn’t as problematic as previously thought? Not exactly. What these numbers really show is that gender discrimination is more of a systemic issue within our society than a result of sexist leadership. Although in-office bias certainly exists, the pay gap starts to develop well before an employee’s salary is set.

Consider the factors that can be “explained” in Glassdoor’s study. Employees with more desirable educational backgrounds and experience in more marketable industries are typically chosen for higher paying jobs. Gender expectations often influence students’ choice of major. Technical fields, for example, tend to be more inclusive of male students, and caregiving fields such as nursing and social work have traditionally been pursued by women more often than men.

“Women and men tend to pursue different career paths early in life and then sort into different industries and occupations, which, in large part, is due to a variety of societal expectations and traditional gender norms. This is the single largest factor we see contributing to today’s gender pay gap,” said Glassdoor chief economist Andrew Chamberlain in a press release.

In other words, men and women often self-sort into different career paths, either due to societal pressures, gender expectations, or an unwelcoming environment in certain fields.

Glassdoor also found that salary discrepancies varied greatly by industry and occupation. Tech positions rank among the highest on Glassdoor’s list of careers with the biggest pay gaps. Computer programming tops the list, with a 27.3 percent gap. C-title executives are third and game artists, designers, and information security specialists all rank high on the list. 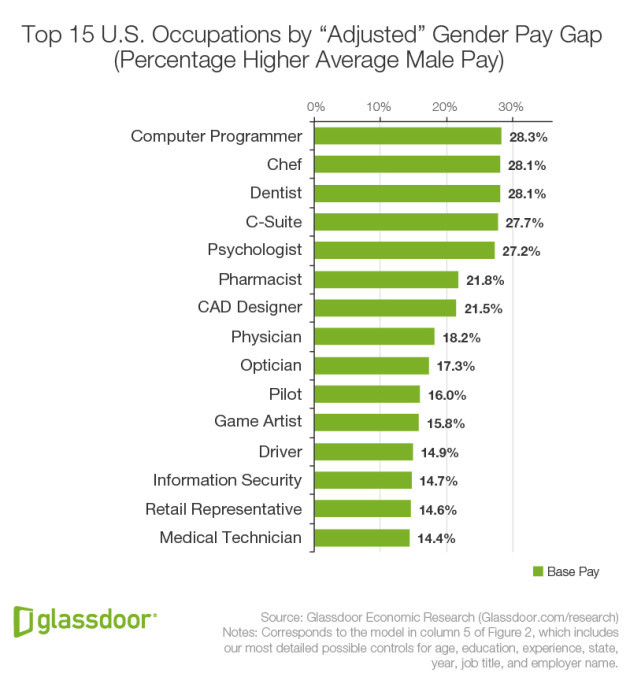 It’s important to understand the nuances of workplace gender bias in order to better address the problem. Statistics show that great progress was made in narrowing the gender pay gap between the 1960s and 1990s, but since 2005, the ratio of female to male pay has stagnated between 77 and 79 percent.

A few weeks ago, Bill and Melinda Gates implored younger generations to consider the factors, implicit and explicit, that make it more challenging for women to compete with their male counterparts, in their annual letter. According to Melinda Gates, we can attack the systemic gender gap at its source if societal expectations about work — in the office and at home — become more gender neutral.

“No matter how efficient we make housework, we won’t actually free up women’s time until we recognize that it’s just as valuable as men’s,” she says. “This isn’t a global plot by men to oppress women. It’s more subtle than that. The division of work depends on cultural norms, and we call them norms because they seem normal —so normal that many of us don’t notice the assumptions we’re making. But your generation can notice them — and keep pointing them out until the world pays attention.”