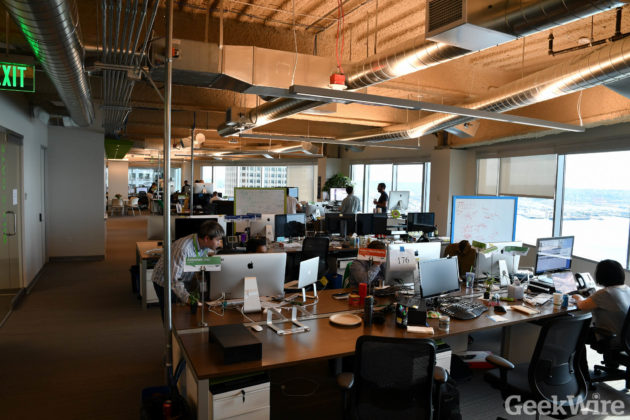 From a recruiting standpoint, Groupon stands in a unique spot among competitors in the technology world. The company is certainly not a startup, launching in 2007 and going public four years later. But given all the recent changes Groupon has endured — and the potential opportunities that lie ahead — the company sees itself as a place where folks are free to innovate and drive change with the support of more-than-adequate resources.

This is part of the pitch Groupon makes to potential employees at its new Seattle office, which just opened last month and houses 300 employees. There is room for another 100 people at the new digs, which takes up over 42,000 square feet of space in the 1201 3rd Avenue downtown building. It’s the latest expansion in Seattle for Chicago-based Groupon, which has had a presence in the city since 2012. 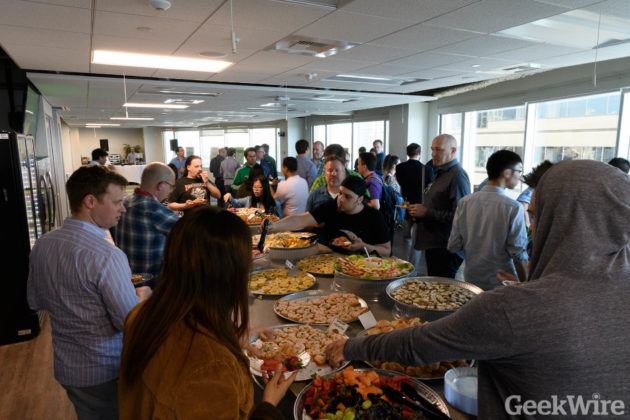 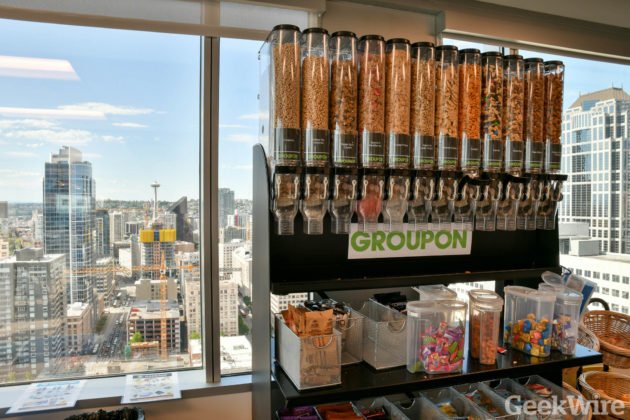 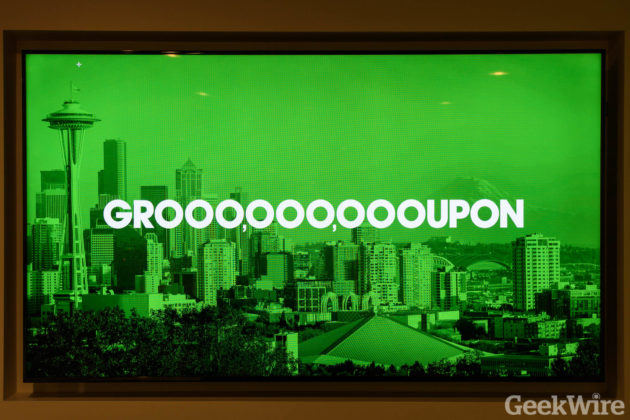 GeekWire had a chance to tour the new office and speak with CEO Rich Williams and Vinayak Hegde, senior vice president of global marketing at Groupon who heads up the Seattle office.

“With big tech companies in Seattle, the vast majority of the work is tweaking and optimizing — there is a lot of innovation, but a lot of the core is already built,” Hegde explained. “On the other hand, there are startups. We are in this middle ground where the scale exists in Groupon, but there is still a lot to be built.”

Hegde, who spent 12 years at Amazon before becoming Groupon’s first Seattle-based employee, noted that the Seattle office is key to the company’s success, and particularly with driving customer growth.

“It plays a very significant role for Groupon’s strategy,” he said.

It’s been a tumultuous past few years for Groupon. The company, which IPO’d in 2011 at $20 per share, saw its stock sink to below $5 per share before the firing of co-founder and former CEO Andrew Mason, who wrote a memorable goodbye letter in 2013.

Since 2014, shares have continued to drop, going from around $8 per share to as low as $2.50 at the end of last year. Groupon also laid off 1,100 employees last September and exited business operations in seven countries, part of an “ambitious process of unifying our global technology platforms, tools and processes.”

But the pioneering deals company — which still boasts a market value of nearly $2 billion — says it is poised for a turnaround. Williams, also an Amazon veteran who took over as CEO in November after working as the company’s chief operating officer, believes Groupon is better-positioned than anyone else to bring the power of the Internet and mobile to local on-the-ground commerce.

“We’re not growing the way we believe we can grow given the size of the opportunity in local and the potential in our platform,” he wrote in a blog post shortly after becoming CEO. “Both of those are going to change.” 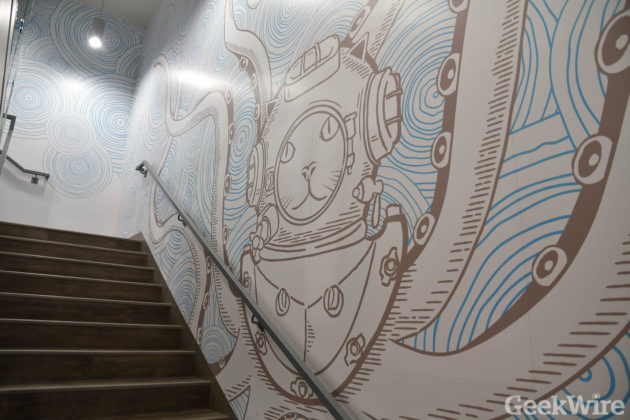 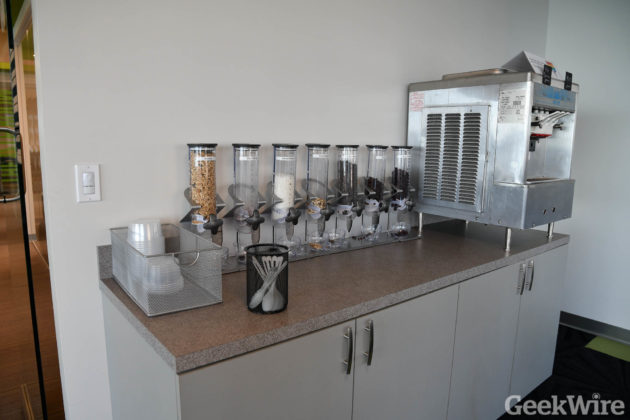 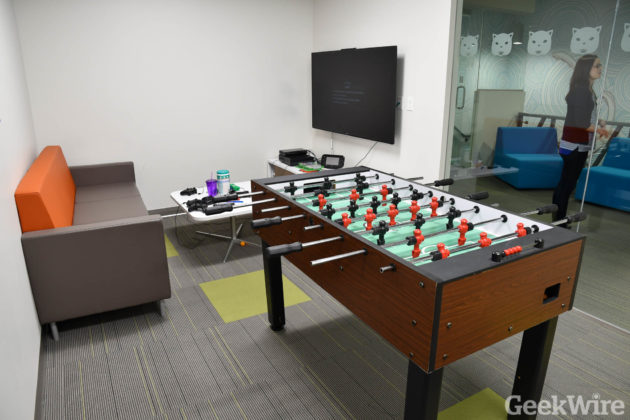 Despite the decreasing stock price and executive changes, Groupon has still grown its billings and revenue by 90 percent since going public in 2011, while its customer base has doubled. Williams noted that Groupon also still has a leg up on competitors, many of which have “come into this space and tried and died,” he noted.

“They’ve recognized that the things that largely made them successful — automation, technology scale — are meaningful, but aren’t sufficient for success in this space,” he explained. “You can’t just build it and they will come. You actually have to go to [merchants] and knock on some doors or pick up the phone and call. That human effort is part of our core DNA and we’ve built a ton of IP around doing that well.”

Internally, Williams said there’s a “high ownership” culture at Groupon, and added that “there’s a comfort with change here.” He also noted a new app used by employees called Cat Food — an ode to the “dogfooding” strategy used by other companies like Microsoft — that allows people across all offices to test and critique new features within Groupon’s mobile platform.

“It’s incredibly collaborative,” Williams said. “It’s opened up the innovation pipeline within the company in a really cool way.” 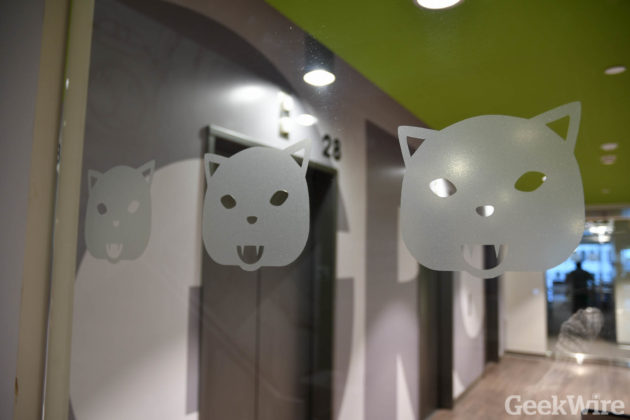 Groupon also tried to encourage collaboration with the layout of its Seattle office, which features open work areas and meeting rooms with glass windows. Much of the artwork and designs were done by Groupon employees themselves.

“When you walk in here, people feel good because it’s very open and minimalist, but you still have that buzz,” Hegde said. “And there’s just enough green.”

Check out more photos of the space below: 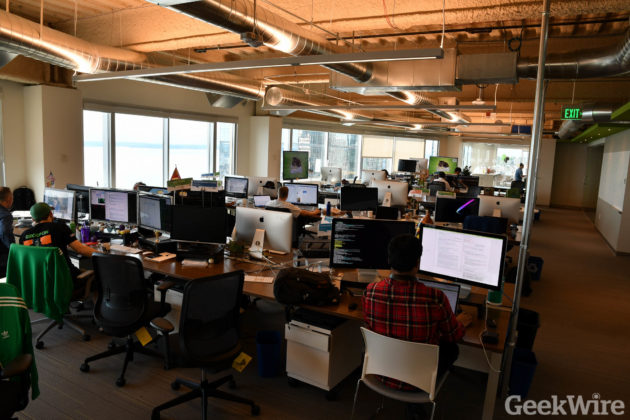 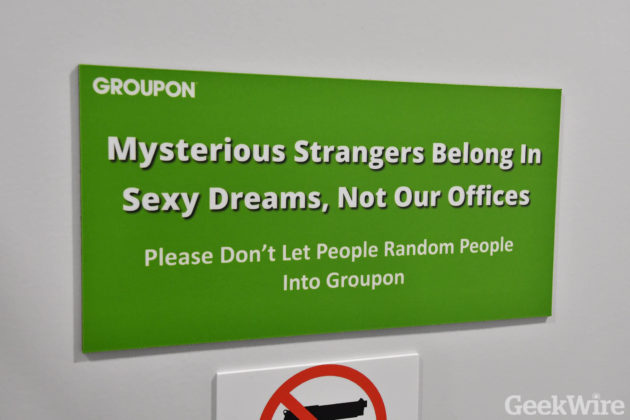 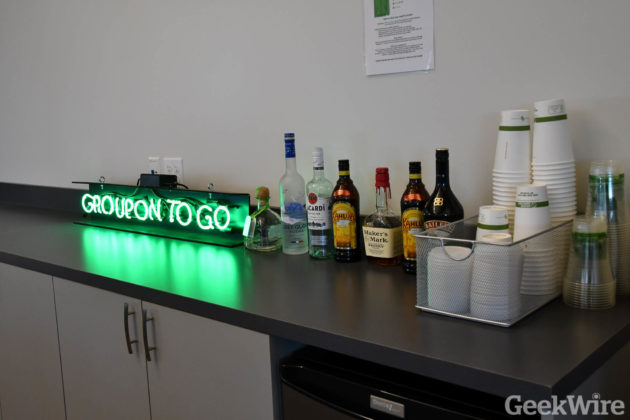 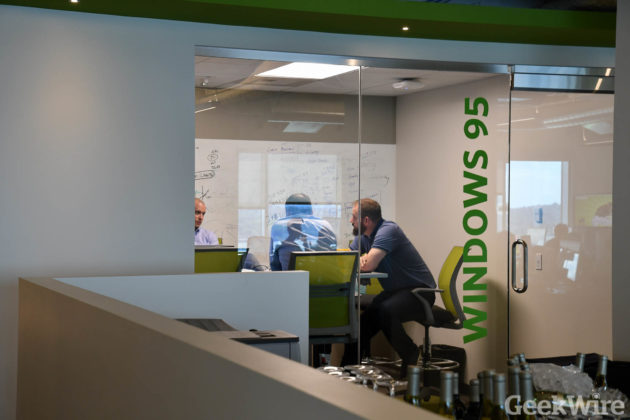 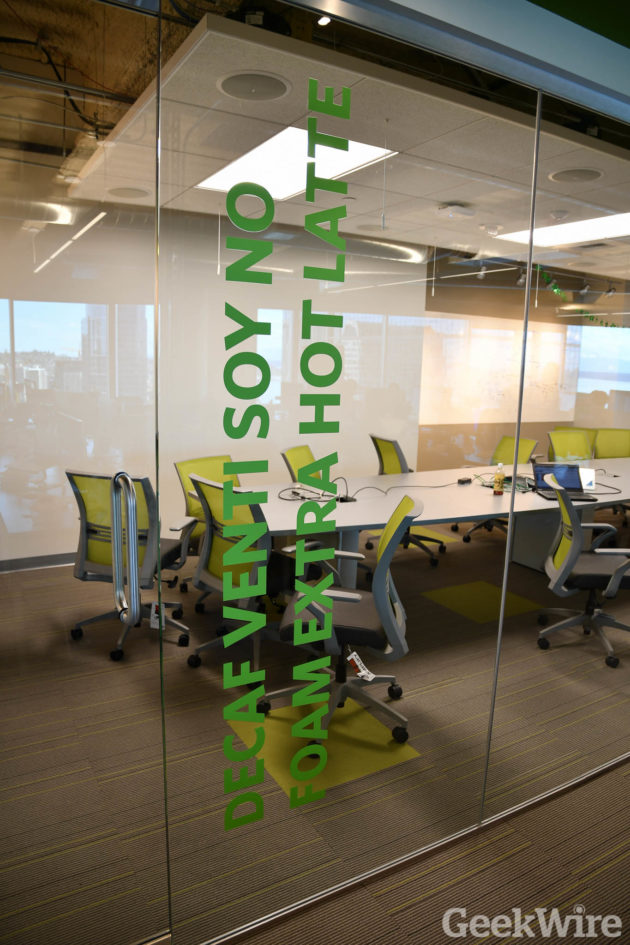 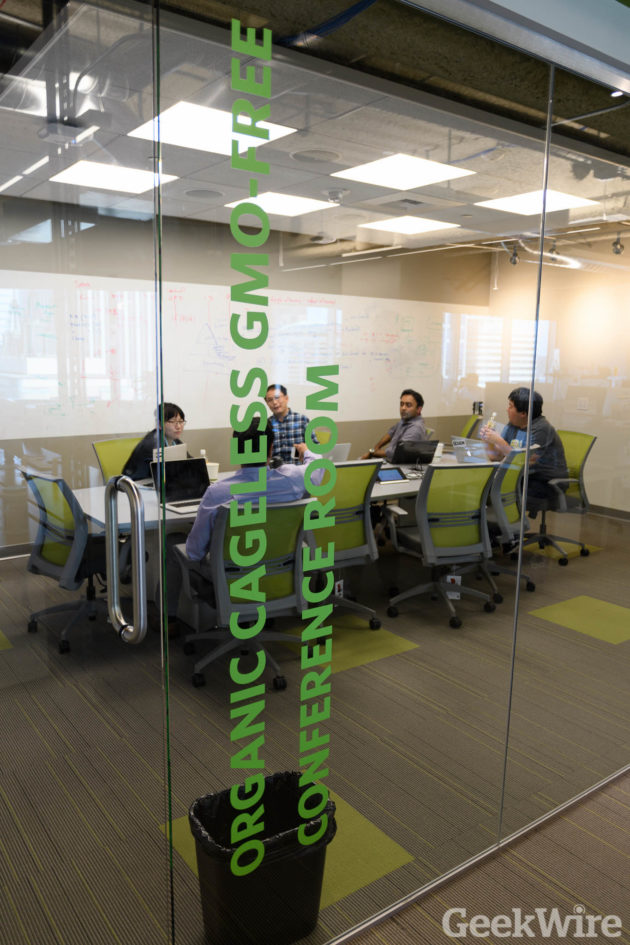 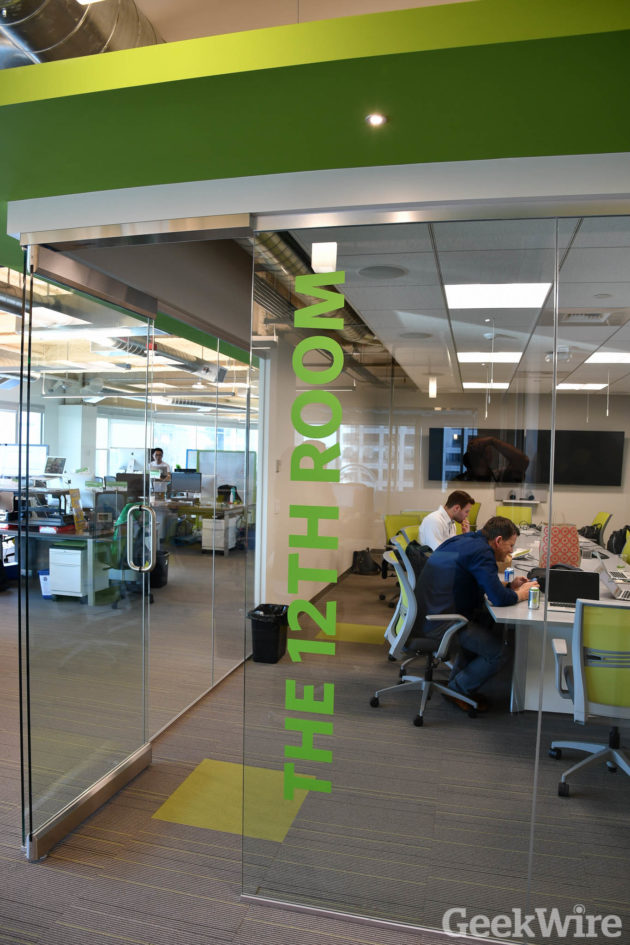 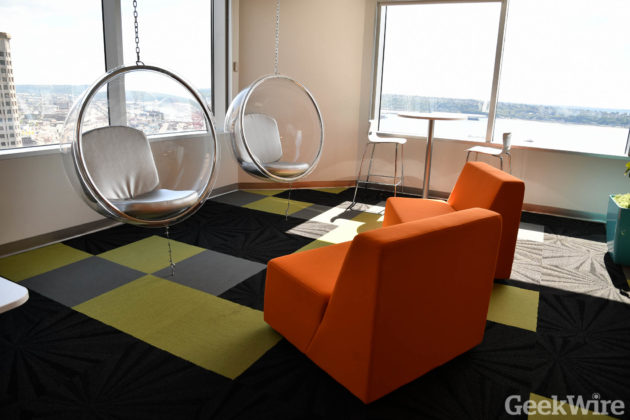 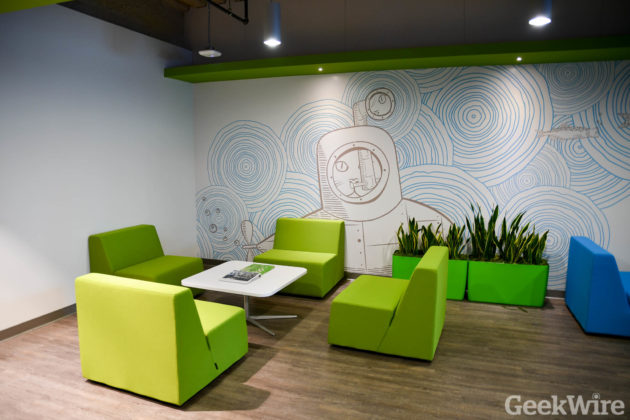 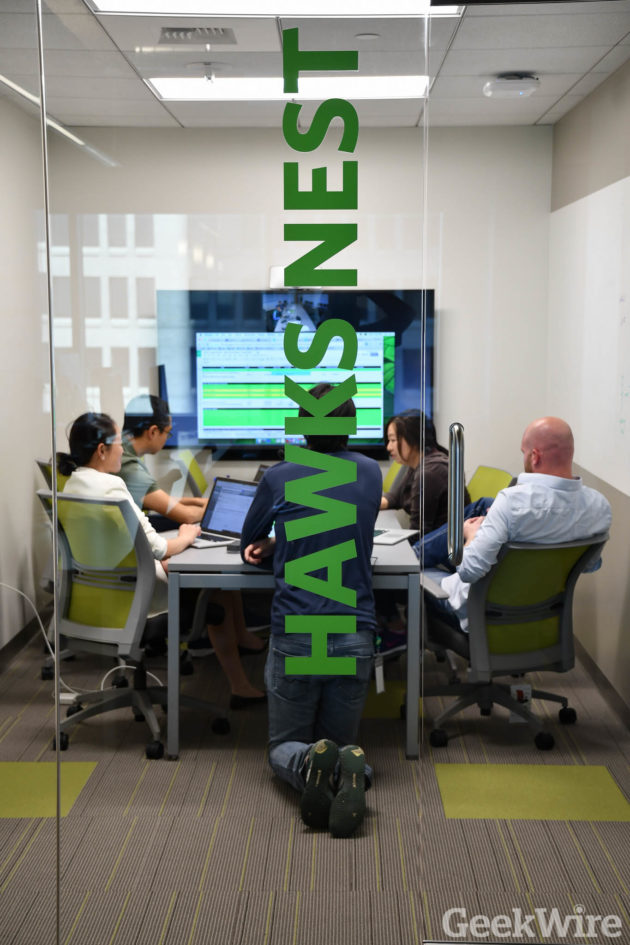