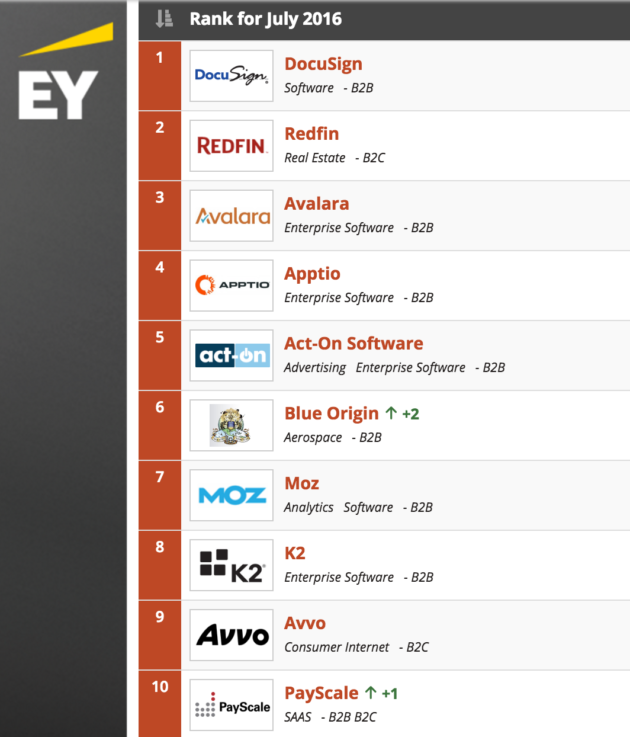 Big funding rounds and new hiring helped companies move up in this month’s GeekWire 200 ranking of the Pacific Northwest’s top privately held technology companies. A couple startups that made their debut last month are shooting up the charts. Another nine landed on the list for the first time this month. And one company on the list is preparing for an IPO.

Click for the full July update to the GeekWire 200 and continue reading for highlights.

Hiya, a spinout of Whitepages, had the biggest jump this month, moving up a whopping 62 spots to number 134 after debuting on the GeekWire 200 last month. The caller ID app officially spun out of Whitpages in April with a staff of approximately 40, and today its LinkedIn page shows more than 50 employees.

Another new edition to the list last month, Seattle-based trucking startup Convoy climbed 28 spots to land at 147. In March, Convoy raised $16 million in a series A funding round, bringing its funding total to $18.5 million. LinkedIn co-founder Reid Hoffman and eBay Motors founder Simon Rothman joined Convoy’s board as part of the raise. Convoy’s service matches trucking companies with shippers that need to move freight, like pallets of steel, for example. The startup has built a smartphone-based, Uber-like system that lets truckers find jobs in a matter of minutes without the traditional legwork — and monetary cut — required when using a broker.

Seattle-based RFID technology company Impinj is getting ready for its initial public offering. It rose two spots to number 26 on the list. Last week it increased the amount it intends to raise in its IPO from $60 million to $74 million. Tom Alberg, a board member at Madrona Venture Group is especially high on Impinj. Even though Madrona has accumulated a 9.4 percent stake in Impinj over the years, Alberg has expressed interest in buying another 38,461 shares of Impinj at the time of the IPO, the equivalent of $500,000 at the $13 projected offering price.

Vicis continues to climb in the rankings, up 21 spots this month to number 127. The Seattle startup completed a $10 million funding round in May to produce its ZERO1 helmet, which the company says provides more protection against skull fracture, traumatic brain injury, and concussion than the traditional helmet used by athletes today. It has raised nearly $20 million since 2014. The University of Washington, from which the startup originally spun out, will test Vicis’ helmet for the 2016 football season, and the company says 25 NFL and 30 NCAA teams have expressed interest in testing the helmet for the 2016 season.

Outreach, a Seattle startup that is developing automation and workflow technology for sales professionals, raised $17.5 million in a new round of funding last month to expand its engineering team. It gained six spots in the July rankings to land at number 113. The company’s technology is used by sales professionals at companies including Adobe, CenturyLink, Adroll, AppDynamics, and Zillow.

WISErg, a “Seattle 10” startup in 2014, gained 19 spots to land at 126. Founded by former Microsoft managers Larry LeSueur and Jose Lugo, the startup helps grocers recycle their old produce and unsold prepared foods with the “Harvester,” a machine that intercepts nutrients still existing in food waste. The recycled material is then transferred to a nearby WISErg facility, where final steps are taken to convert them into a liquid which can be sold to local agricultural farmers, along with other individual consumers. The Redmond startup raised $4 million in May to go along with $12.3 million in April, pushing its total funding over $24 million.

The top five remains unchanged this month with DocuSign at number one, followed by Redfin, Avalara, Apptio and Act-On Software.