In a small room off the lobby of Seattle’s Silver Cloud Hotel, some of the world’s best bridge players assembled on Monday morning to take on a team from China as the three-day Online Bridge World Cup kicked off. One of the world’s richest men, Bill Gates, just happened to be among those playing. 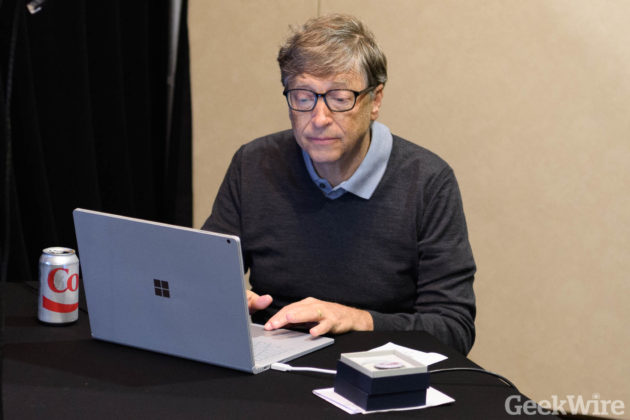 Gates, a longtime bridge player, was invited to be part of team USA-BBO (Bridge Base Online), along with Bob Hamman, the world’s all-time top player; Jill Meyers, No. 2 all-time women’s champion; Sharon Osberg, a regular partner of Gates and his bridge pal, Warren Buffett; Fred Gitelman, the founder of BBO; and Sheri Winestock, wife of Gitelman.

On an exceptionally gray and rainy Halloween in Seattle, the Microsoft co-founder even apologized to Gitelman and Winestock for the weather, as they had flown in from Las Vegas to take part.

“The gray is very foreign to us,” Gitelman told GeekWire as team members assembled for photos and received medals for their participation

Gitelman and Winestock started a company in the 1990s writing educational software for bridge. “This was before everyone had an internet connection. It was before Windows, actually,” he said.

Around 2000, the couple created what became Bridge Base Online, the largest online game site for bridge, which is what Gates and his teammates are using this week to compete against teams from China and Italy. Gitelman said about 100,000 people log in from all over the world and play bridge on the site every day.

The couple got to meet Gates through Buffett, who they met around 1994 when the Berkshire Hathaway billionaire was given one of their educational CDs.

“[Buffett] liked it and he got in touch with us and just phoned us one day out of the blue,” Gitelman said. “He said, ‘I like this, I’d like to order some more software from you.’ And when I took his name and address I realized who we were talking to, so along with the software I sent him a letter saying, ‘Can you give us some business advice?’ because we had no idea what we were doing, we were young and just bridge players.”

So when it came to bridge, the bridge between Gitelman and Gates was Buffett.

“Eventually Warren showed some of our software to Bill, who liked it, and one day they needed an extra person to play bridge,” Gitelman said. “There were three of them and they thought that I might be an interesting person to invite. So I became their fourth in a bridge game and we became friends.”

Gitelman said he was the first kid on his block to a have a computer, around age 12 in 1977. He began playing bridge at age 17. The irony of having a software and bridge connection with someone so famous is not lost on him. He said they’ve played together about a dozen times.

“It’s weird. Life is strange sometimes,” Gitelman said. “When Bill first got in touch with us and invited us to play bridge with him we thought someone was playing a joke on us. We couldn’t believe it.”

Before play got under way on Monday, team USA-BBO participated in a Skype call with a team in Beijing. Gates was thanked for taking part and, while staring into a MacBook connecting him to his Chinese counterparts, he said a few words. (For the record, he used a Microsoft Surface Book to compete in the tournament.)

“I love to play bridge and a lot of the people here are the people who got me excited about bridge,” Gates said. “This should be a lot of fun. I’m always hoping more people understand how much fun bridge is and hopefully more people try and play because it’s such an amazing game.

“And thank you all for staying up late for us,” he added, to the team that would be playing after midnight Tuesday in China.

With that, Gates took his seat at a computer that was partitioned off with black drapes so he couldn’t see teammates to his left and right. He cracked open a can of Diet Coke and began to play as the room was emptied.

In a room next door, a small group of people watched the first match online via a large television screen which showed the moves being made by both teams. A British play-by-play announcer could be heard calling the action.

“One of the great things about bridge is you can be Bill Gates, or you can be the poorest man in the world, when you are playing four spades it should have the same excitement as trying to avoid three straight losers and a club,” the announcer said. “And it doesn’t really matter where you come from, which country you come from, which age group you belong to. That’s why bridge is the great equalizer.”

Among those in attendance was Anne Farmer, who started Seattle Next Gen Bridge three years ago. The program teaches public school kids to play the classic card game which has an undoubtedly older fanbase.

Wearing a scarf with card suits on it, Farmer called bridge “the geekiest game in town” and said that she learned as a young woman at Tulane University in New Orleans.

“Bridge forces you to focus because you need to process a lot of complex problems at once,” Farmer said, as she watched Gates and company play while simultaneously analyzing their moves and trying to explain to me what I was seeing unfold.

Farmer offered up a wealth of insight when it came to bridge, including saying that it was the No. 1 mind exercise for staving off dementia and Alzheimer’s disease.

At the other end of the spectrum, and with no offense intended to the folks playing just a room away, she said Omar Sharif (“Lawrence of Arabia”) was the “handsomest bridge player ever.”

After early play, Gates and Sharon Osberg were leading in their match with Chinese Contract Bridge Association, and they were slightly down against the Lavazza team playing in Turin, Italy. They played eight of 24 boards with each team. Winners of the tournament will be announced after play concludes on Wednesday.

This morning I played in the first-ever online @BridgeWorldCup. I hope this draws more people to the card game I love playing. pic.twitter.com/6ySXwTHYk6