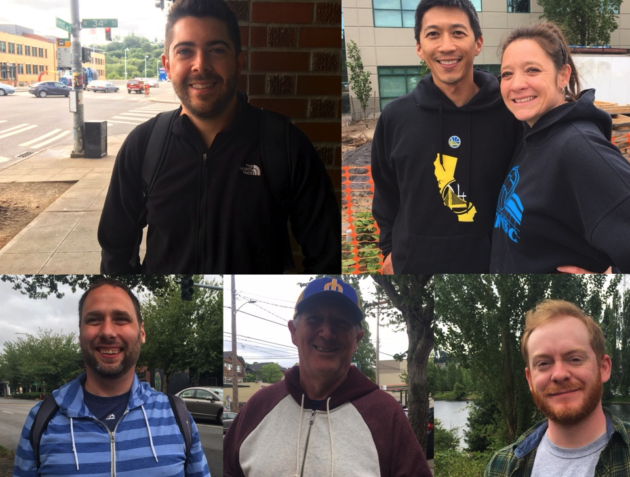 Monday marked a pivotal day for business oriented social media site LinkedIn, with the announcement that it will be acquired by Microsoft for $26.2 billion in cash. The deal is the largest in Microsoft’s history but not the largest the Redmond company has attempted. (That was its failed attempt to acquire Yahoo.) Considering LinkedIn operated at a loss this past quarter, the deal is less about short-term profits and more about the long-term potential to impact Microsoft’s products.

So what do people think about the combination of Microsoft and LinkedIn? After the news broke, GeekWire took to the streets to get initial reactions and general opinions on the acquisition, and the two companies. People also weighed in on the potential pros and cons of their union, and talked about their own experiences using LinkedIn. Below are their comments, edited for clarity.

“I have LinkedIn but hate LinkedIn. Get rid of the bogus endorsements and the random connections. … I have people who have endorsed me on LinkedIn that have never seen me in the class, invites from people I don’t know, and people aren’t really looking at it. I think part of it is their metric on how people can elevate their own profile by having more connections. So either users randomly pick people to connect with or there is some algorithm that tries to match you up with random people.”

“Make it more useful. If there were actually genuine connections, if you really could connect with people you wanted to connect to, if the endorsements were legit… maybe it would be better. As far as a networking tool, it seems fine. But it seems like LinkedIn’s more spam than an actual social network.”

Brad Creighton, educator for a domestic and sexual violence agency.

“Well the first thing I thought was: That’s a lot of money. But I also know that LinkedIn with the way it’s growing is probably good for Microsoft. I don’t always have a super favorable opinion of Microsoft products and things, I use them, so I guess my hope is that if they can keep LinkedIn moving in the direction it’s moving, with whatever their strategic plan is to grow the network, I think it can be very beneficial for both identities.”

How could Microsoft improve LinkedIn’s interface, or do you think they will do the opposite?

“I don’t know…I don’t think they will do the opposite. I think that Microsoft, being the corporation it is, has a lot of resources available to them. Maybe they can increase the bandwidth and put more development into different apps and different functionalities of LinkedIn. I think that might make it more beneficial for people who use it.”

“I think integration can be really good…I don’t like it when people make things mandatory… as long as you don’t have to use Office to use LinkedIn I think it will be OK. Just because Office is not the cheapest software and I think that could deny accessibility to a lot of people. I also think there’s a lot of different things that Office can bring to LinkedIn. Just in terms of managing contacts and networking that could make it more beneficial. I hope that at the very least they take the time to do some market research and investigation before they roll anything new out.”

“I think [Microsoft] paid too much money. I think that it’s a cool service but I don’t think there’s a lot of profit to be made on it. But then again, I don’t know a lot about acquisitions and money when it comes to big contracts like that. Other than that, it’s going to be a service that a lot of people are going to be using.”

“I think being able to integrate LinkedIn with other services Microsoft has could be valuable, but other than that I don’t really see the purpose of Microsoft being the company that purchases them.”

“That’s a lot of money. I can’t even fathom that much money. I think it’s good for LinkedIn when it comes to marketing. It will allow them to reach out to a lot of people they may not have been able to reach before.”

“I think Microsoft will improve the company. You’re associated with a large name and a large corporation. You know, they’re going to streamline things and make it very accessible to other people. They wouldn’t buy it if they couldn’t make it better or make it easier for other people to use.”

Is LinkedIn worth that much money?

“Potentially… I think that Microsoft will make it better. I think Microsoft might actually help them because they have a following. They’re someone people know and recognize. LinkedIn is something that everybody uses or has heard of, I mean you kind of know about it but it’s just one avenue. I actually think Microsoft could push it up to the next step. They’re just a good company.”

“I say you integrate them for ease of use… Keep improving them, make it easier for people to use. Like an iPhone.

“I’m not that surprised by the news, but it doesn’t affect me at all. I have a LinkedIn account, but I don’t often go on there. The last time I went on LinkedIn was probably before my current job, so two years ago.”

“There’s not enough to do on the site. They could probably add more features and change the layout a little bit. I know a lot of people, some of my friends, think LinkedIn is kind of a joke and I know it’s good for finding jobs and networking and stuff but I’m sure [Microsoft] could add some features to draw new users and increase traffic.”

“It could probably be useful to integrate with things like Skype, it would be a good networking tool for people on LinkedIn and allow you to communicate more easily. If you could do an interview on Skype through LinkedIn, I think that would be really cool and that would be a really useful thing.”