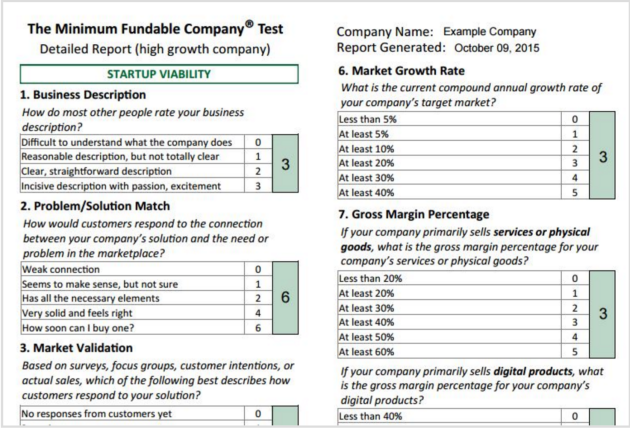 If you’re a startup founder looking to raise some money for your company, there’s a new test available that may help you gauge your chances of landing an investment.

The 20-question test asks questions related to everything from market validation to gross margin percentages, with five areas of focus: Startup Viability, Business Model, Market Strategy, Management, and The Deal.

The test is meant to show areas of strength, but perhaps more importantly, areas where a founder may need more work. Investors can also use the tool to rate a startup’s fundability.

Brewer said he got the idea to create the “MFC” after entrepreneurs would ask him how “fundable” their startups were.

“I would usually respond by saying ‘it depends,’ which is true, but not helpful,” explained Brewer. “And then I would go into a case-by-case analysis of each startup’s fundability. After several instances of this, the members of the group encouraged me by saying, ‘you can do better, Bryan.’ So I developed the 20 questions of the test, which reflect most of the measurable elements that investors look for in startup pitches.”

Brewer recommends that a company receive a score of at least 50 percent for each area of focus in order to be considered a “minimum fundable company.”

The test is free, along with additional training resources, but Brewer said he plans on offering advanced training and services for sale. Brewer is the founder and sole employee of Funding Quest.