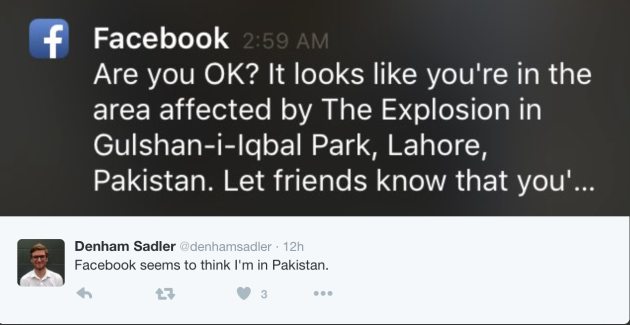 Imagine the wave of dread and confusion that might charge through someone in New York or London if out of the blue they received a message from Facebook that reads: “Are you affected by the explosion? Reply safe if you’re ok.”

A bomb that killed more than 70 people did go off on Sunday, but in Lahore, Pakistan, thousands of miles away from some of the Facebook users who received such messages. Facebook says a glitch in the service’s safety check system erroneously asked users nowhere near the blast to check in, causing a lot of angst.

Facebook’s Safety Check feature enables users who might be in areas affected by terrorist attacks, earthquakes or other emergencies to electronically add their names to a list that informs friends and family they are well. Managers at the social network have issued an apology for Sunday’s malfunction.

“We hope the people in the area of the bombing find Safety Check a useful and helpful way to let their friends and family know they are okay,” Facebook wrote. ” This kind of bug is counter to our intent. We worked quickly to resolve the issue and we apologize to anyone who mistakenly received the notification.

Safety Check, and similar services from other tech companies, such as Apple, Google and Twitter have been widely applauded. The social networks have helped people learn quickly whether a loved one is safe. In addition to being more efficient than phoning or emailing  hundreds of friends, the social networks can keep cellphone networks from becoming overburdened. During major emergencies, cellphone use spikes as people try to contact friends or relatives.

Speaking from experience — I was in Nepal during the April 25 quake and in Paris during the Nov. 13 terrorist attack — Facebook’s Safety Check and Google’s Person Finder were very helpful. My family was saved from hours of worry in both cases thanks to these services and in Nepal it also provided me a means to find friends who were also in the country.

This is the system’s second controversy during the past year, Facebook used it for the Paris attacks but did not switch it on during a Beirut bombing and the company was accused of being selective.  Let’s hope Facebook quickly corrects these problems.