Facebook is grappling with growing pains. The $350 billion company, powered by more than a billion users, is coming to terms with the fact that is far more than a social network. It is the world’s biggest publisher — one with a big legitimacy problem.

In response to criticism over the dissemination of fake news on Facebook, the company today announced it’s rolling out new tools to fight hoaxes.

Facebook users can now report an article they believe to be fake, with the option to send a message notifying the person who shared it originally. Once a story is flagged, outside fact-checking organizations, like Snopes, will investigate. If they determine the story is fake, it will be publicly marked as “disputed” and linked to an article explaining why. 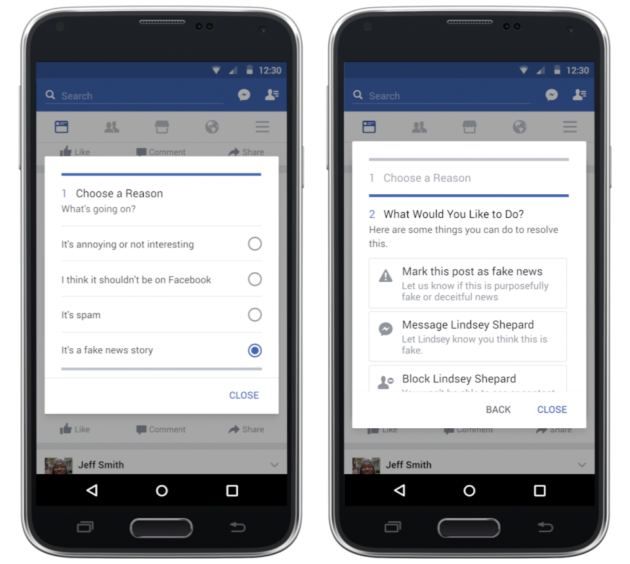 The company has been under pressure in the weeks after Donald Trump’s surprise victory in the U.S. presidential election, an event many believe was influenced by fake news articles. The update is a significant change of tone for Facebook. The company has landed in hot water for exercising influence over the content people see in their News Feed in the past. Facebook is particularly concerned about losing users over allegations of censorship.

“We believe in giving people a voice and that we cannot become arbiters of truth ourselves, so we’re approaching this problem carefully,” Facebook says. “We’ve focused our efforts on the worst of the worst, on the clear hoaxes spread by spammers for their own gain, and on engaging both our community and third party organizations.”

Facebook is also trying to take the wind out of spammers’ sails. The company is prohibiting “spoof domains” (sites masquerading as legitimate news sources) and analyzing external sites that post to make sure they don’t violate Facebook policies. Disputed articles will also not be eligible for Facebook ads, according to The New York Times.

The company acknowledges fake news is difficult to police and says these steps are just a preliminary experiment.

“The problems here are complex, both technically and philosophically,” Mark Zuckerberg wrote after the election. “We believe in giving people a voice, which means erring on the side of letting people share what they want whenever possible … we do not want to be arbiters of truth ourselves, but instead, rely on our community and trusted third parties.”