Envelop VR, a Bellevue-based virtual reality startup backed by the likes of GV, Madrona Venture Group, and other high-power angels, has cut staff.

“We did let go of a few folks mostly around sales and marketing as an adjustment to market conditions,” Envelop founder and CEO Bob Berry told GeekWire.

Berry did not provide details about how many employees were let go. A LinkedIn search shows about 20 current employees at Envelop.

I had a chance to test Envelop’s software this summer and came away impressed. It is a fascinating way to interact with desktop apps. The software lets you switch between different tabs and programs in a truly immersive world with infinite monitors inside a 3D space. You can open multiple windows, adjust their sizes, and place them anywhere you’d like.

For example, I could enlarge and move around three-dimensional charts and graphs in Microsoft Excel in a 3D space; switch quickly to a different tab and watch videos on YouTube; or do some online shopping on a site that let me view products up-close and in three dimensions. Even playing “Crossy Road” was more fun in this immersive environment. 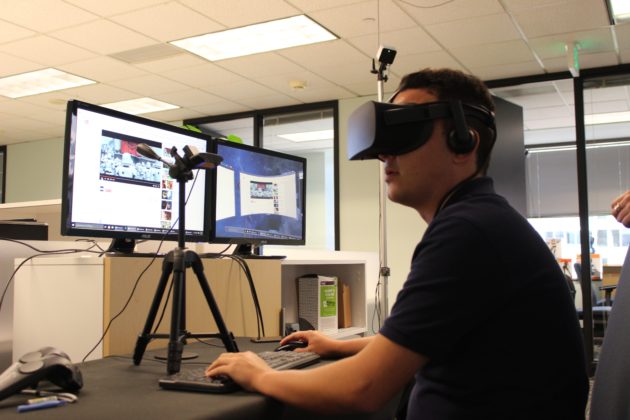 The general idea is to help people be more productive and efficient while computing. The platform enables use cases like 3D product and data visualizations. The technology also lets developers work and create content while in their own 3D environment, eliminating the need to switch between 2D and 3D worlds during testing.

There is also mixed reality functionality that enables you to see your actual hands and devices like a keyboard or mouse while you interact in a 3D world, which can be custom-designed with various backdrops. The system uses a webcam to enable this mixed-reality functionality. This lets you take advantage of a program like Excel in its natural form with a keyboard and mouse, but also gives you new perspective with the addition of virtual reality.

But the job cuts at Envelop show the difficulty for virtual reality companies that are working with new technology, much of which has yet to reach mainstream consumers, in an unpredictable market.

It is also an increasingly competitive market. Early competitors in the space include Virtual Desktop for Rift and Vive, Valve’s Steam Desktop Theater, and the virtual desktop mode in Microsoft’s own HoloLens, which is a Windows 10 device in the form of an augmented reality headset.

Envelop just launched its Windows public beta in August. Berry told GeekWire in August that the company is still figuring out the most effective use cases for immersive computing. He also noted challenges with hardware, as well as selling the product to enterprise customers.

“Enterprise sales cycles are long, but when you add this new technology on top that you can’t understand until you experience it, it makes everything longer,” Berry said.

But Berry is extremely optimistic about the potential for virtual reality, particularly with immersive computing and the enterprise. He called it the “most intimate form of computing we’ve ever had.”

Ultimately, from just a very high-level perspective, raising the overall intelligence of humanity is a pretty noble aspiration. But I believe that is going be enabled.

“When I had my first true VR presence experience two years ago, I always knew it was much bigger than just entertainment,” he said in August. “This is a fundamental as the internet itself. So while everybody is chasing the obvious like entertainment, games, and live events — which I think are fantastic — I just think there is something much bigger here. We are trying to usher in this age of immersive computing where you are breaking through the screen and entering this world of data and compute where it’s all around you versus you looking at a screen.”

Berry, who is also CEO of a Bellevue-based video game development studio called Uber Entertainment, added that the technology will enable more high bandwidth connection to the data we work with and “ultimately result in unlocking human intelligence” because of new insights from information.

“Ultimately, from just a very high-level perspective, raising the overall intelligence of humanity is a pretty noble aspiration,” he said. “But I believe that is going be enabled.”

Envelop has raised $7.5 million to date from investors like GV (Alphabet’s investment arm formerly known as Google Ventures); Madrona Venture Group; and other high-power angels like Hank Vigil, Sujal Patel, Rudy Gadre and Geoff Entress. The company was a finalist for “Startup of the Year” at this year’s GeekWire Awards. It currently has four open positions on its jobs page.

Envelop is one of several virtual reality/augmented reality startups in Seattle. Others include Pluto VR, VREAL, Pixvana, VRstudios, Convrge, Polyarc, and Endeavor One.