Two Seattle-based entrepreneurs want to help bridge the gap between startups and investors with a new Shark Tank-like web series.

Chaya Jadhav and Sai Talluri are the co-founders of Disruptrs, a new platform that invites entrepreneurs from around the world to pitch their ideas in front of a group of investors and advisors. Nine companies, hailing from Missouri to Miami, traveled to Seattle this past weekend to film the debut episode, which will air online next month. The plan is to move the production around the country for each episode; the next show will be filmed in the Bay Area this February.

The format is similar to the popular ABC show Shark Tank. But Disruptrs is focused on bringing together startups and investors from around the world and helping companies that are building not only consumer-level products often seen on Shark Tank, but also other technology-based solutions, too.

The idea for Disruptrs came about after Jadhav spent the past several years in London, where she launched a startup that was acquired. She later advised other entrepreneurs, many who had trouble raising an initial investment and getting early customers.

When she moved to Seattle eight months ago, Jadhav was constantly asked about the startup ecosystem in London. That’s when the lightbulb went off.

“It seemed like no one knew what was happening in other parts of the world, and vice versa,” she explained. “We thought it would be great to have a platform that not only showcased innovative companies focused on big problems and solutions, but also to help them get initial seed funding and customers.”

Jadhav met Talluri, a veteran of Microsoft and Amazon, at the Founder Institute office in Seattle. They both know that there are already hundreds of startup pitch events around the world each month. But they think Disruptrs is different.

“There are so many of these events, but they are all done at the local level,” Jadhav said. “We want to help surface companies no matter where they are. No one has done this on a large scale or at a global level.”

The plan is to film each show in a different city, with new startups and judges each episode. Here were the participating companies on the first episode, with descriptions from Disruptrs: 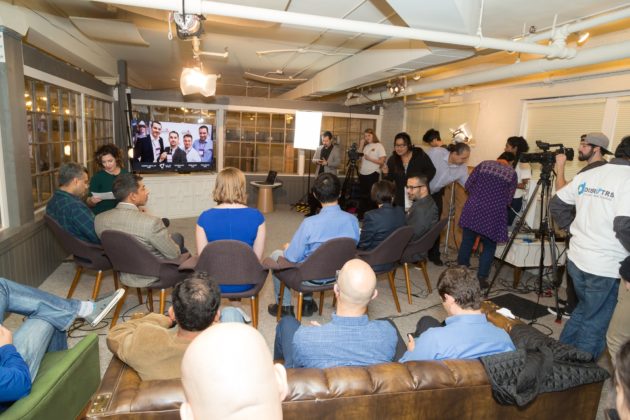 The judges have two choices after watching a pitch and asking questions: in or out. If they’re “in,” they agree to either invest money or help advise the startup and introduce them to other connections. Last weekend, seven of the nine companies received an “in” from at least one of the judges.

Sood, who previously created Microsoft Ventures before launching his eSports startup Unikrn, said he was intrigued by the participating startups.

“At the event, I actually found two really great startups that I’ll likely help get to the next level,” he told GeekWire.

Jadhav and Talluri are bootstrapping Disruptrs and aren’t making revenue at the moment. There are potential ideas to create a Disruptrs fund and invest that money in the companies that make it through the show. The first episode will air online on Dec. 20.