A new court filing provides the first detailed glimpse of the internal financial results at what has become one of the Seattle region’s most closely watched privately held companies: Gravity Payments, whose CEO Dan Price made international headlines last year with his plan to raise the minimum salary at the company to $70,000 and reduce his own compensation to the same amount.

The figures for 2010 and 2011 contrast with what Price told CNBC anchor Kelly Evans during an event last year: that he was making “probably $50,000” in 2011, which he called the “most I’d ever made in my life” at that point. Price acknowledged in a Jan. 27 retraction on Twitter and Facebook that he misspoke in those off-the-cuff comments at the Aspen Ideas Festival.

“Retraction alert: went back through this interview and realized I estimated my pay data for the beginning of the recession when she was asking about 2011,” Price wrote in his recent post on Facebook. “Oops. Isn’t the first time I made a mistake, but can it please be the last?”

Price made the original comments during this June 2015 interview at the event.

The actual figures were disclosed separately last week in King County Superior Court, in a compensation analysis attached as an exhibit to a Feb. 3 court filing by a lawyer for Price’s brother and business partner, Lucas Price, who is suing Dan Price over issues related to the CEO’s past compensation.

According to the tables, Dan Price was paid $1.1 million annually in 2013 and 2014, consistent with his public statements.

GeekWire asked Dan Price for comment on the compensation information, and the company posted this message on its Facebook page following our inquiry.

Our CEO made big surfing waves when he aligned his own pay with our lowest paid team members. But did you know before making his famous pay cut, a substantial portion of his pay was in the form of shares of company stock, set forth in a 2008 shareholders agreement, which had a plan to increase his percentage of ownership in the company?

His cash compensation was in his own words, “ridiculously high.” But did you know he set aside a majority of his post-tax compensation for a company rainy day fund? This was to assure we can continue to drive costs down and service up for our community business owners, even in a recession. We, the Gravity team, are all proud of him and his bold leadership.

The Gravity CEO’s comments and motivations have come under increasing scrutiny since he announced plans in April 2015 to institute the minimum salary. The move has attracted widespread media attention for Price and the company — from the Today Show to the Daily Show — and the Gravity CEO has acknowledged that part of his plan is to use the publicity to boost customers and sales, to help cover the cost of the raises. 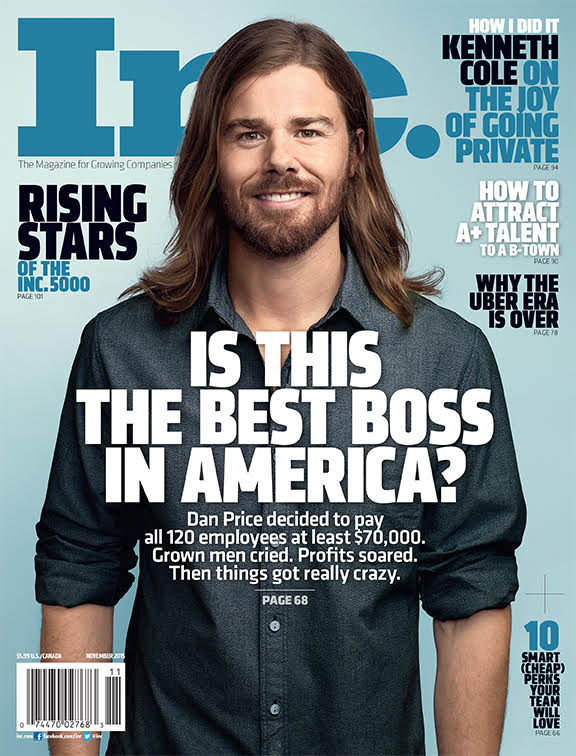 But the public disclosure of the privately held company’s internal financial information, as part of the legal dispute between the brothers, is a new twist.

Gravity Payments’ sales, gross profits and other data, including Price’s compensation, are included in financial tables in a report from an accountant retained by Dan Price as part of his defense against the suit from his brother. In the suit, Lucas Price alleges that Dan Price “improperly used his majority control of the company to pay himself excessive compensation.”

Dan Price talked about his salary with CNBC’s Evans at the Aspen Ideas Festival last summer as part of a broader explanation of the evolution in his thinking about employee and executive compensation. After a difficult discussion in 2011 with a Gravity employee named Jason who was frustrated by his low pay, Price said he committed to raise employee pay by an average of 15 percent the next year, in 2012.

He told Evans that the raise was the “absolute most we could afford at the time.”

According to the newly released financial data, Price’s own compensation more than doubled in 2012, to more than $2 million. Price told Evans that his compensation in recent years had been set with the input of compensation consultants, taking into account what it would take to replace him as the company’s chief executive if something happened.

“To me, seeing the disparity between what I was making, and the struggle they (Gravity’s employees) were living every day, it just didn’t make sense to me,” he said, explaining the subsequent revelation that ultimately led him to raise minimum employee salaries to $70,000 and lower his own compensation last year.

The report, by accountant Steven J. Kessler, concluded that “Dan Price’s compensation meets the good faith and fair dealing requirements of the (Gravity Payments) shareholder agreement and is both reasonable and approximates market derived compensation for his services.”

Court records show that Dan Price’s lawyer originally provided the compensation report to Lucas Price’s lawyer in December as part of a disclosure of potential expert witnesses. But until last week, the report was not part of the court record available to the public in the case.

As part of the court case, the parties have agreed to a protective order to keep confidential information from becoming public. Gravity is a privately held company. Dan Price owns about 67.5 percent of the company, and Lucas Price about 32.5 percent, according to the consultant’s report.

The compensation report was made public in an exhibit to the Feb. 3 filing by Lucas Price’s lawyer, which is available via the King County Court electronic case records system, without any confidential designation. The filing was made as part of a disagreement between the parties in the case over the admissibility of expert witnesses for a scheduled May 2016 trial in King County Superior Court.

Dan Price’s public statements have been put under a microscope in the months since his $70,000 minimum salary announcement at the company, which was widely viewed as a bold statement for wage equality.

As reported on Dec. 1 by Bloomberg Businessweek, his announcement of the salary changes actually came about a month after Price was served with the lawsuit from his brother challenging his compensation.

Inc. magazine reported in its November cover story that Price told them he had “sold all his stocks, emptied his retirement accounts, and mortgaged his two properties — including a $1.2 million home with a view of Puget Sound — and poured the $3 million he raised into Gravity.”

However, as GeekWire reported in December, no mortgages have been recorded on the properties. In a subsequent court filing, Dan Price acknowledged that his homes haven’t been mortgaged, saying that he “attempted to mortgage my home and rental property, but so far these loans have been denied based on the ongoing lawsuit.”

More recently, an investigative report by a documentary filmmaker and citizen journalist, Doug Forbes, raised questions about Gravity Payments’ business practices. The report alleged that Gravity routinely misclassifies restaurants that use its service as bars instead — making them eligible for lower credit-card processing fees, and giving Gravity an unfair pricing advantage over rivals by violating the rules set by big banks and credit-card brands such as Visa and MasterCard.

In a post last week on Facebook, Gravity Payments defended its business practices without specifically addressing the report. The post explained that the company “works with the merchant to make sure they are both in the right category code, and the one that will align with business objectives” in situations where the proper code might not be clear.”

Dan Price continues to make high-profile appearances about his minimum salary decision, including a speech last week at the United Nations, speaking to young leaders from around the world about the rise of purpose-driven businesses, at the UN’s Economic and Social Youth Forum 2016.

Price addressed his own compensation as part of his UN speech.

“And for me, I asked myself, ‘What’s the one thing that I care about enough to give up that whole chase of money driving me for the rest of my life?’ For me, we are at the very beginning of a shift. We are at the very beginning of a movement where we realize that commerce and economics and business is not just about money. It’s about helping each other. It’s about solving the problems of humanity, and it’s about being a good steward of the resources that we have here on this Earth.

“Those are actually the principal reasons of business,” he said, “and making money is a way to fuel those greater purposes.”

This weekend, Price posted on Twitter, “Following what you believe is its own reward. People can talk all they want.”

Following what you believe is its own reward. People can talk all they want.