In ultra environmentally-conscious Seattle, most builders put at least a couple sustainable features in their projects, but few have taken on the challenge of the city’s arduous Living Building Pilot Program. Brooks Running’s Seattle headquarters, located in the Stone34 building near the north shore of Lake Union, last week became only the second building to be certified under the program.

Participating in the program, then called the Deep Green Pilot Program, allowed the team behind the 132,300-square-foot structure to construct a bigger building. But the project had to use cut water and energy usage by 75 percent relative to comparable buildings, reuse 50 percent of rainwater captured on site and hit numerous benchmarks supplied by the International Living Future Institute, the organization that developed the program. If the building didn’t pass the test, the main players on the project team would be looking at financial penalties.

The only other building to complete the city’s living building program so far is the Bullitt Center.

Following a year-long test period, the building beat its conservation goals. Part of that was due to the many green construction aspects put in by developer and contractor Skanska USA, but Brooks employees played a role as well. 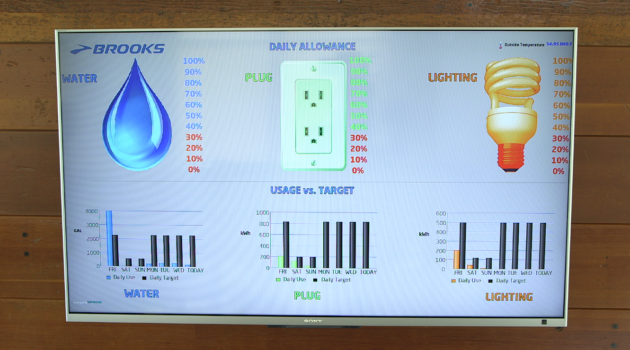 “Stone34 was Skanska’s development entry point into the Seattle market, and as a self-financed company we were able to take risks beyond what a normal developer would, because we knew it was the right thing to do,” Lisa Picard, executive vice president for Skanska USA Commercial Development, said in a statement. “We couldn’t be prouder that Brooks Running, who also took huge risks, crossed the finished line at levels beyond our wildest dreams. Building design and innovation can only take you so far in creating sustainable buildings. These must be complemented by high-performance operations and top-notch occupant behavior.”

All those green features didn’t scare away buyers. Laird Norton Properties and Unico Properties bought the building in 2015 for $70.1 million.

Skanska and team members LMN Architects, McKinstry and others designed and built a mechanical system that includes chilled beams, air and water heat recovery systems and a thermal storage tank. The walls, roof and other pieces of the building envelope are highly-insulated to make sure heat and air don’t leak out of the building. The reused rainwater helps cool the building, is used in toilets and irrigation of onsite vegetation.

A reader board in the building’s “Beastro Cafe” displays the building’s energy usage in real time. A piece called the Fissure in the lobby changes along with energy usage. The piece “blooms” when power usage is low and “wilts” when it is high.