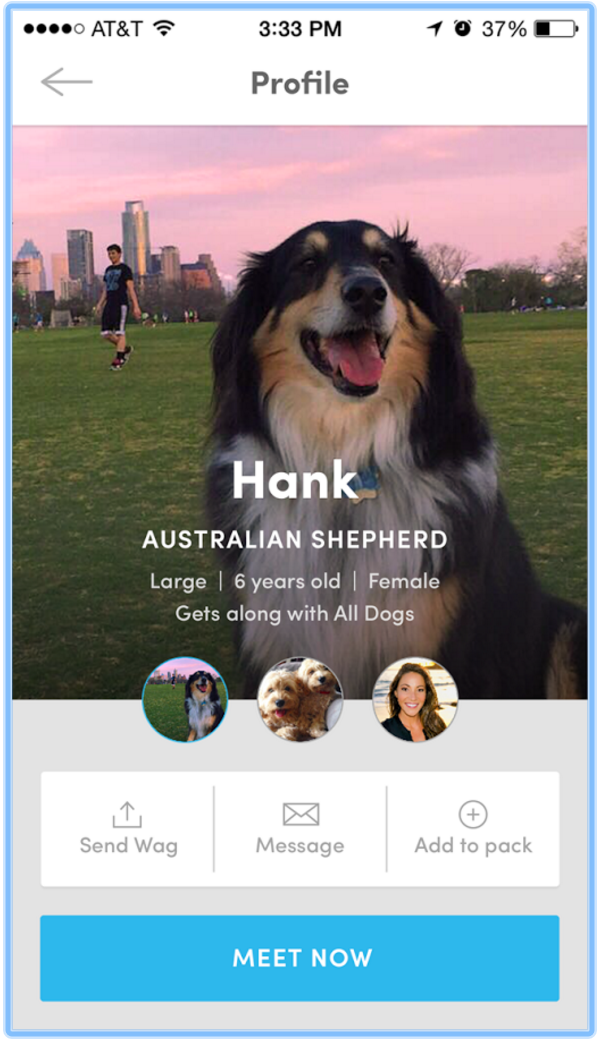 OK, BarkHappy isn’t exactly that. But the Austin, Texas-based startup is finding success with its mobile platform that helps dogs meet other dogs.

Former Microsoft and Nokia manager Ninis Samuel founded BarkHappy in Austin this past July and launched the service in Seattle and Portland two months ago.

“There are thousands of dogs/dog owners using the app already and we’re still improving as we go,” Samuel told GeekWire. “It’s all about helping people discover the dog-friendly world around them. Make new friends, find more things to do with their dogs, and keep them happy.”

Samuel founded BarkHappy after adopting his dog Kerby from a shelter and later learning how difficult it was to find dog-friendly places where Kerby could meet fellow canines. He decided to combine his passion for technology with his love for dogs and build an app.

BarkHappy uses smartphone GPS to help dog owners discover other dog owners in their area. Users provide details about their dog, like age, breed, and how well they get along with big and small dogs. One feature is called “Daily Match,” which uses an algorithm to show dog owners one other dog each day that may get along with their own, based on a variety of factors like temperament to location.

The app also provides information on nearby dog-friendly places like restaurants, bars, hotels, parks, and more.

“The dog loving community in Seattle and Portland have been helping add new places to the map, giving us great feedback on things they want to add to the app,” noted Samuel, who lived in Seattle from 2003 to 2008 while working for Microsoft .

BarkHappy is already working with dog-friendly businesses to host weekly events in Seattle, where it also partners with charities like Seattle Humane Society and Emerald City Pet Rescue.

BarkHappy employs six at its HQ in Austin and two local managers in both Seattle and Portland, similar to how companies like Uber and Lyft have city-specific employees to manage local markets. The startup is funded by angel investments, but Samuel wouldn’t reveal an exact amount for funding to date.