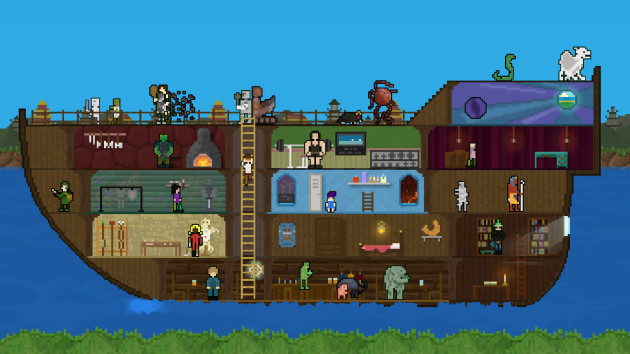 I’ve never actually played Candy Crush, but I’ve gained a basic understanding of what makes it so popular by watching over people’s shoulders on public transit. I can see the appeal of cascading bursts of color as tiles fall into place and your score balloons. But the candy theme and garish colors always seemed more geared toward my aunt than me.

With this App of the Week, you can get in on the fun of a match-three game like Candy Crush without giving into childish graphics and that annoying freemium structure. You Must Build A Boat combines match-three gameplay with standard role-playing game tactics like leveling up characters and battling ever-harder enemies.

While building a boat is part of the game, most of the gameplay takes place in dungeons that your character runs through, battling monsters and unlocking chests. In order to defeat a monster, you have to match either swords or magic staves until it dies. But the monster is always pushing you back, and if you fall off the screen it’s game over. Luckily, you can match up three shields to stop the monster for a while.

As you beat various dungeons (which is accomplished by building a better boat), you travel to new place with bigger, badder monsters, so you have to level up your swords and staves with gold you earn by unlocking chests. You can also learn a monster’s weakness, be it swords or staves, letting you prioritize which tiles you want to match up.

The game is pretty complicated up front, but you can quickly get a hang of it by just playing through a few frustrating rounds. And even if you don’t get the hang of it quickly, you can swipe around randomly to get through a tough spot, earning you enough coins to level up and make things a little easier on the next round.

You Must Build A Boat is $2.99 from the App Store and Google Play. It’s also available on Steam at $4.99 for PC gamers, but the controls are definitely targeted toward touchscreens. Unlike other match-three games, there’s no reliance on in-app purchases which means you’re not waiting around for lives to fill back up or anything.