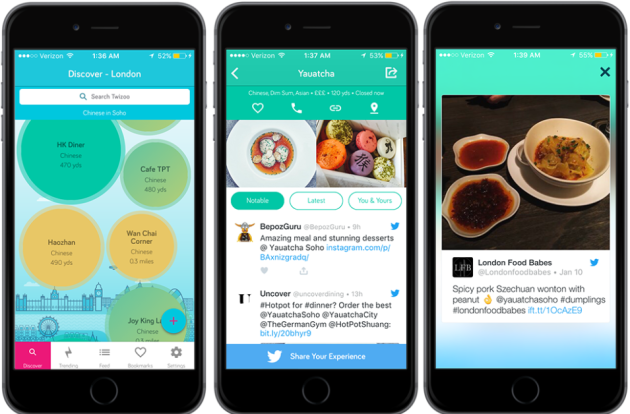 Let’s say you’re in a new city, ready for lunch, and you’re not sure where to go.

Sure, you could open up the local alt-weekly’s dining section for some authentic local options, but those picks may be a little too out-there for a simple lunch. You could fire up Yelp and look for a few five-star places, but the five-star options may be full of fakes. 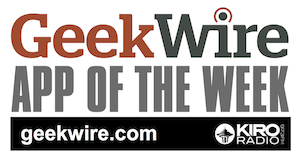 Or you could turn to Twitter, where people post high-quality pictures and short reviews of all the hippest spots around. While finding those tweets used to be hard, this week’s App of the Week, Twizoo, simplifies the process.

Twizoo collects all the tweets it can find about a restaurant, cafe or bar, analyzes them for sentiment, and presents them in a neat feed. It’s that second part that’s really helpful. Instead of just showing you an unending feed of tweets, they categorize them as positive or negative to give the restaurant an automatic rating.

That rating helps makes it a little easier to navigate Twizoo’s interface, with greener bubbles pointing to better restaurants, while red ones are to be avoided. The size of the bubble relates to the number to tweets for a particular restaurant.

The analyzation also cuts out promotional tweets from the restaurant’s PR team or other clutter that doesn’t really help in rating a restaurant. Twizoo then takes into account other factors, like number of retweets and replies, to rank the tweets.

The idea of turning to Twitter is really the genius at the heart of Twizoo though. When reading through Yelp reviews, most users only show up to write about the terrible or stellar experiences, nothing in between. But using tweets gathers a more candid view of what people actually think of the restaurant.

Twizoo is currently in the middle of a nationwide rollout after debuting in London and San Francisco. The U.K.-based app maker brought the app to Seattle just a few weeks ago, and plans to be available in 12 major cities, including Chicago, New York and L.A., before March 7.

At the outset, some of Twizoo’s picks were a little sparsely supported, but the app is always drawing in new tweets, quickly approaching 50 million \. In just the past few days, it has  surfaced some really good-looking spots around the GeekWire offices that I may need to check out during my next lunch outing.

The free app is available now for iOS and Android.