The highly anticipated and incredibly immersive new Pokémon Go is poised to take smartphone gaming to a whole new level. As an intern tasked with finding out what it takes to become a Pokémon Master, I was poised to take on the greatest assignment of all time.

Nintendo has traditionally stayed away from smartphone gaming, but fortunately, the Japanese gaming giant has partnered with Niantic, a company known for its augmented reality efforts. Together the two have transformed the ordinary world into a personal Pokémon Universe.

The free app, which launched this week to much fanfare, requires two commitments from the user: A willingness to suspend one’s imagination, and a good pair of walking shoes.

Once you can appreciate the mindset that you are actually immersed in a video game (the classic theme music helps), small things in your environment begin to seem more exciting. You become a tourist in your own city as landmarks become more glorious and street performers become a magical part of the experience.

The game’s makers have cleverly blended the real world and the gaming world, turning your surroundings into an interactive 3D map that is yours to discover. Minor locations around you, such as public art or restaurants, become Poké Stops where you receive Poké Balls and other items.

In order to encounter and interact with the ever-elusive Pokémon, your camera turns on and you have to rotate until they appear on screen. When you spot a creature, you start throwing Poké Balls at them — and the fun begins.

The best part is that real life locations correspond to game play in a way that makes sense. For example, I could only catch specific water-type Pokémon when I was near the water on West Seattle’s Alki Beach. Furthermore, the “tall grass” where trainers are accustomed to searching for Pokémon, was a grass field in reality. If a location in your physical surroundings seems like a good place to find Pokémon in the game, it probably is.

Certain Poké Stops require you to enter a physical location in order to search for Pokémon. There were several inside of Seattle’s Pacific Science Center, but I wasn’t willing to pay admission to get at them. On more than one occasion, I had to walk inside a restaurant to catch Pokémon. After all the walking I worked up an appetite, and while inside a Spud Fish & Chip trying to catch a Dratini, I figured I might as well eat. It served as a good indicator that Poké Stops in the game play could translate to customers for businesses in the real world.

After you collect enough experience points and level up, you can try your luck at the closest “Gym.” Gyms in Pokémon Go are where a trainer goes to test his or her skills against difficult trainers in order to receive badges. The more badges a trainer has, the better that player is at catching stronger Pokémon. Gyms in the real world are major landmarks such as the Space Needle, the University of Washington’s Husky Stadium or the famous Troll in the Fremont neighborhood. Users can also battle their nearby friends to find out who really is a true Pokémon Master.

At this point, it’s probably clear that the game has the ability to take you a fair distance from home. In one day I logged over 10,000 steps on my iPhone’s pedometer. I biked, I walked, I ran, and I took public transit. I found myself in parts of my city I had never been. Games like this can clearly encourage smartphone gamers to get legitimate exercise while they “catch ’em all.”

But Pokémon Go is not without its faults. I had considerable frustration with the app as alerts indicating server issues appeared more times than I could count. After restarting the app, I had to keep logging back in.

Restarting countless times made it hard to progress, and sometimes the game would crash for 20 or 30 minutes at a time. It was especially prone to crash just as I was catching a Pokémon or about to enter a Gym. And on top of that, it’s an absolute drain on your phone’s battery. I could only play for about three hours before I needed to charge. Oh, and if you don’t have good signal, good luck. I don’t even want to know how much data I used up.

Amid all the frustration, I couldn’t help but fall in love with the game, and the concept as a whole. While it helps that I’m a true Pokémon fan at heart, I’m extremely optimistic about what it means for the future of smartphone gaming and augmented reality.

Better yet, Pokémon Go encourages physical movement — in five hours of gaming I walked five miles — interaction with other people, and engagement with the real world. It inspires your imagination and makes you feel like a kid again.

If you can remember to look both ways before you cross the street and take your eyes off your device once in a while to enjoy what’s around you, the reality is that Pokémon Go will be a game changer with a positive impact.

Download Pokémon Go today in the App Store and on Google Play.

Update, Saturday, July 9: Look at all these people I found playing at a PokéStop. This really is a game changer. 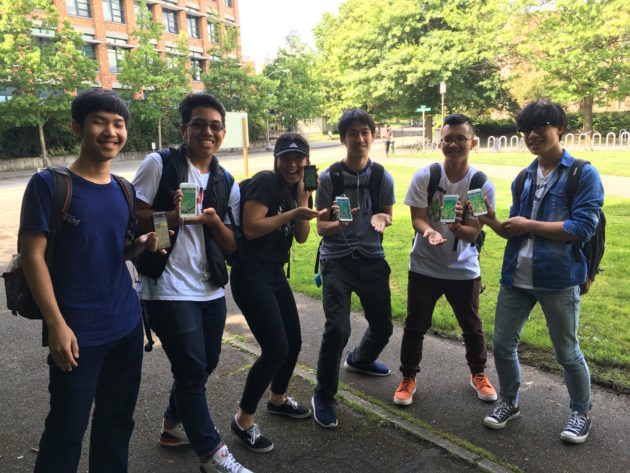