A walk or drive through the Amazon campus in downtown Seattle and South Lake Union on any given day looks like a drive through new Seattle, as young tech workers skirt about between shiny buildings. On Friday, with hallways, sidewalks and restaurants crowded with a recognizably older generation of folks, it looked like “Bring Your Parents to Work Day” at Amazon — and that’s exactly what it was.

The first-time event at the tech giant welcomed some 5,000 parents from as nearby as Seattle and as far away as China and India. The event in the company’s new meeting center at the base of its corporate headquarters played like a giant science fair, in which the men and women who make Amazon run got to show mom and dad, and other family members, exactly how.

A variety of activities were scheduled from 10 a.m. to 2 p.m., and parents were encouraged to take in product and services demonstrations, listen to speakers, visit office buildings, check out the Doppler building’s 17th-floor dog deck, have lunch and more.

For many visitors, it was a chance to gawk at the sprawling campus that is taking over a large portion of Seattle. Whether or not they were previously familiar with what the city looked like didn’t seem to matter. The biospheres under construction on 7th Avenue drew a lot of looks and many parents were spotted gazing skyward from the streets, with cameras pointed at the tall buildings around them.

GeekWire spent time at the event and asked parents a few questions, including whether or not they knew what their kid actually did at Amazon, what was the last thing they ordered on Amazon and what they thought of the sprawling urban campus.

Jessica Juergens and her mom, Beth Ide, of Federal Way

Juergens is an account representative in sales who helps third-party sellers sell stuff on Amazon and make more money. She’s been with the company for a year and a few months. Her mom said she “kind of” knew what her daughter did and then pretty much nailed it.

“She works with customers to help them sell things on Amazon in a more effective way,” Ide said.

“Yeah, that’s about right,” Juergens said. “That’s kind of how I explain it to people who don’t understand what things are.”

The last thing Ide bought on Amazon was a toy for her grandson’s birthday. “I send things to my kids a lot. It was delivered on Tuesday, to Michigan. With free shipping!”

While standing across from the biospheres, Ide said, “This is crazy. I have been to downtown Seattle but I haven’t been to this part of Seattle, and it’s amazing. It’s like a totally different city. A lot of energy.”

When asked what they were going to do together, they laughed as Ide said, “We’re going to go to the tours of Amazon” and Juergens countered with, “We’re not going to go shopping, and out to lunch. Definitely not.”

Ameya Rahane and his mom, Aditi Rahane, of Pune, India

“Yes, of course,” Aditi Rahane said when asked if she knew what her son did at Amazon. “Fire TV. Before that he was working with software development for the locker department. So far I’m not exactly sure what’s he doing with this new team.”

Ameya Rahane is indeed a software developer with Fire TV. His mom called Amazon “amazing” and said it’s a “big establishment” that is gathering “all good people, intelligent people.”

The last thing she ordered on Amazon was a Bullet mixer for her kitchen back in India.

“She does a lot of computer work and a lot of contacting and a lot of event planning,” Celeste Bass said of her daughter, Cassandra, who has been at Amazon for a year and a half and is a program specialist with AWS recruiting.

After trying her hand at controlling a robotic arm by waving her hand over a laptop, Celeste said she was surprised that there is “so much technology” at Amazon, mentioning warehouse robotics and the possibility of drone delivery.

As the owner of medical supply device manufacturing company, Celeste said her recent Amazon deliveries include a lot of supplies for her business, as well as a desk and some books.

Haofeng Zhou, his son, David, and his parents from Shanghai, China 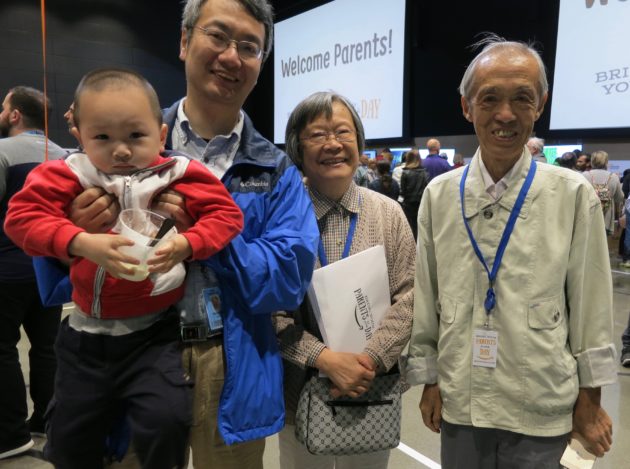 Zhou works with Kindle advertising and has been with Amazon for more than a year.

His 3-year-old son, David, was eating ice cream and had an orange balloon tied to his waist as his grandparents doted on him.

“They’re so proud of my job, working at Amazon,” Zhou said.

Barron Willis and his mom, Margaret Willis, of Seattle

“Oh yeah,” Margaret Willis laughed when asked if she knew what her son, Barron, did at Amazon. When he said he worked for Amazon Web Services, she replied, “Don’t ask me. You’ve got the wrong person.”

But she did say Amazon was “wonderful” and she was thrilled to be at the event and that her son works there.

Barron Willis has only been with the company for three weeks as technical program manager after spending 21 years at Intel near Olympia, Wa.

Justin Hanson and his father, Jim Hanson, of Tacoma, Wa.

Justin Hanson is a technical recruiter at Amazon, where he’s been for about 2 1/2 years. His dad pretty much knew that, but not because he makes the drive north very often.

“I haven’t been to downtown, I avoid Seattle now,” Jim Hanson said. “I used to come here all the time. I don’t want all the hassle with traffic.”

The last thing he can remember showing up at his front door from Amazon? “Some equipment for my off-road vehicle. I’m always buying junk.”

Jacob Johnson and his mom, Claudia Larkin, of Bellevue, Wa. 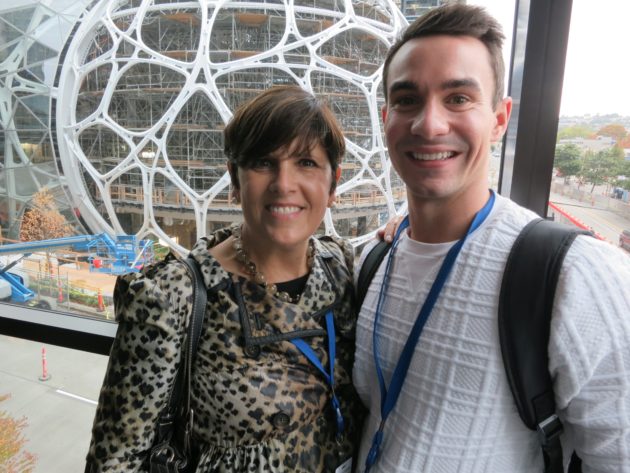 Johnson has been a recruiter at Amazon for two months. When I mentioned the other recruiter, Justin Hanson (above), Johnson said, “There are about 5,000 of us.”

Larkin is an interior designer and she was particularly interested in the look of Amazon’s office space. Just yesterday she said she received a digital tape measure in the mail. “I order a lot from Amazon,” she said.

As for the look of the city?

“I’ve been here for 40 years and I cannot believe what’s going on,” Larkin said. “It is insane. I’m driving around on these streets and I’m like, ‘My God, that building that I thought was there is gone.’ It’s like being in a different city for me. Even as a local. It’s astounding.”

Tyler Jarmon and his mom, Lisa Lucas, and grandparents, Jan and Bill Jarmon, all of Tacoma, Wa.

Grandmothers know their stuff. When Jan Jarmon was asked if she knew what her grandson does at Amazon she said, “He works hard.”

Bill Jarmon knew that Tyler was in cybersecurity but he said he’s going up the ladder and is in another IT section. “I thought it had something to do with a robot,” Jan said.

In fact, Tyler manages technical risk and automation, in which he drives the reduction of that risk across the company. He’s been doing that for 4 1/ 2 months and has been at Amazon for a year and half.

“I just call Tyler and say, ‘Would you order this for me?'” Jan said, when asked about her most recent Amazon purchase.

Tyler Jarmon commutes two hours in each direction on a daily basis. He says it’s “absolutely worth it,” but wonders about Prime People Delivery being a thing someday.

Adria Meno and her parents, Laurie and Joe Orr, of Spokane, Wa.

“It’s just a complete change of skyline everywhere,” Laurie Orr said of the city where her daughter works.

After nine years, she says she knows now what it is her daughter does for Amazon: she’s a senior product manager for the marketplace team.

The last thing to show up at the Orr’s house via Amazon was a baby mattress, for when their 1-year-old grandson comes to visit.

Ardine Williams and her parents, Bill and Ardine Thompson, of Palm Springs, Calif.

The chance to work at Amazon as VP of talent acquisition for AWS brought Ardine Williams out of retirement.

“For my folks to see what took me out of retirement and why it’s just so fun to be here,” Williams said when recalling the thrill of Friday. “I trade a day of my life for every day I come to work and it’s great for me to have the opportunity to share that with them and just see the vibrant environment that we have the privilege of working in.”

When asked what it is his daughter does at Amazon, Bill Thompson said, “Makes things happen,” adding that her title is “Vice president of some wizardry, I don’t know.”

“We use it all the time,” Ardine Thompson said of Amazon delivery. The last thing to show up? A large bag of kitty litter for the couple’s Italian greyhound, Lucy, who is litter-box trained.

Check out Ardine Williams’ blog post on the event.

Ava Boeker and her parents, Colette and Warren Boeker, of Bainbridge Island, Wa.

Warren Boeker said his daughter works in vendor management around memory products, and he was correct. Ava Boeker has been with the company for a year and two months and on Friday they were checking out Doppler’s 17th-floor dog park, where a couple Amazon pets were getting some exercise in light rain.

“We love dogs,” Colette Boeker said, noting that their last Amazon purchase was probably dog food. And Ava does in fact sometimes bring her own dog, Bo, to work.

Surveying the view from the park, Ava’s dad reflected on the growing city around him.

Rehema Abdul and her parents, Yunus and Msovu Abdul, and her sister, Sheila, of Houston

Rehema Abdul has been at Amazon since April and serves as a recruiting coordinator. Her dad knew that.

But Rehema’s mom Msovu Abdul couldn’t really remember the last Amazon item to show up at the house until Rehema reminded her of her Mother’s Day gift.

“Oh yeah!” Msovu said. “My daughter sent me a suitcase,” which she used to travel from Houston for the event.

Yunus said Houston is cheaper than Seattle, but the traffic in Amazon’s hometown is better, which might come as shock to folks like Jim Hanson, above.

As for Sheila? The 14-year-old said she’ll “probably” want to work at Amazon someday.