The “opportunities and challenges” of artificial intelligence spurred some of the biggest technology companies in the world to come together Wednesday to announce that they were creating a new organization to ensure that AI ultimately benefits people and society.

The Partnership on AI is a non-profit organization bringing together Amazon, Microsoft, Facebook, DeepMind/Google and IBM to advance public understanding of AI technologies and formulate best practices.

A website for the organization spells out the goals, mission and tenets, and member bios are included for representatives from each of the companies.

“Together, the organization’s members will conduct research, recommend best practices, and publish research under an open license in areas such as ethics, fairness, and inclusivity; transparency, privacy, and interoperability; collaboration between people and AI systems; and the trustworthiness, reliability, and robustness of the technology,” the Partnership said in its news release. “It does not intend to lobby government or other policymaking bodies.”

Amazon is represented by Ralf Herbrich, the company’s director of machine learning and managing director of the Amazon Development Center in Germany

“We’re in a golden age of machine learning and AI,” Herbrich said in a statement. “This partnership will ensure we’re including the best and the brightest in this space in the conversation to improve customer trust and benefit society.” 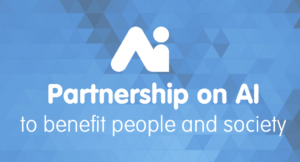 Eric Horvitz will represent Microsoft. He is a Microsoft Technical Fellow and managing director of the company’s Redmond, Wash., research lab. His bio says he “balances lab management responsibilities with ongoing research on machine intelligence and on opportunities to leverage the complementarities of human and machine intelligence.”

“We’re excited about this historic collaboration on AI and its influences on people and society,” Horvitz said in his statement. “We see great value ahead with harnessing AI advances in numerous areas, including health, education, transportation, public welfare, and personal empowerment. We’re extremely pleased with how early discussions among colleagues blossomed into a promising long-term collaboration. Beyond folks in industry, we’re thrilled to have other stakeholders at the table, including colleagues in ethics, law, policy, and the public at large. We look forward to working arm-in-arm on best practices and on such important topics as ethics, privacy, transparency, bias, inclusiveness, and safety.”

In an age when machines are rapidly closing the gap between what was promised in science fiction and what they can realistically achieve, more voices have emerged expressing concern over what an AI-dependent society may look like.

For some, the fear of losing the freedom to drive their own car is enough to cast suspicion on the advancements of autonomous vehicles. Others worry about jobs lost to a workforce of robots. And in doomsday scenarios straight out of the “Terminator” movies, still more foresee the potential for war waged by and/or against out-of-control AI.

According to the Partnership, AI has the potential to improve many aspects of life, and certainly the companies involved have plenty to gain from work they are already conducting in the field — aimed at the vast audiences that they currently reach.

“As researchers in industry, we take very seriously the trust people have in us to ensure advances are made with the utmost consideration for human values,” said Yann LeCun, director of Facebook AI Research.