We knew it was too good to be true almost instantly.

The crinkled red paper, the low-resolution type, and the Amazon logo all reeked more of an ambiguous protest statement than a juicy double, animal style.

And yet, as a California native, I couldn’t help but feel a sliver of hope, thinner than the crunchy little fries at the bottom of the box. Could Amazon, in all its great and terrifying power, really be bringing the West Coast’s best burger to Seattle?

After GeekWire spotted the sign, which reads “In-N-Out Burger Coming Soon, Brought to You by Amazon,” we got in touch with the California-based fast food chain.

Here’s what a spokesperson had to say: “We currently operate restaurants in California, Nevada, Arizona, Utah, Texas and Oregon. While we know that Seattle presents many exciting opportunities, our slow growth plans will keep us focused on just those six states for at least the next few years. We are not currently looking at or working on any new locations in Seattle.”

How quickly dreams are dashed.

In addition to the sign we spotted in Seattle’s Capitol Hill neighborhood, another one has been getting attention near Amazon’s headquarters.

It’s not the first fake Amazon sign to appear on Seattle’s streets as a reaction to the e-commerce giant’s massive growth. Last year we spotted a flyer in Amazonia, a.k.a the South Lake Union neighborhood, that read “Stop the Yuppification of Seattle.” 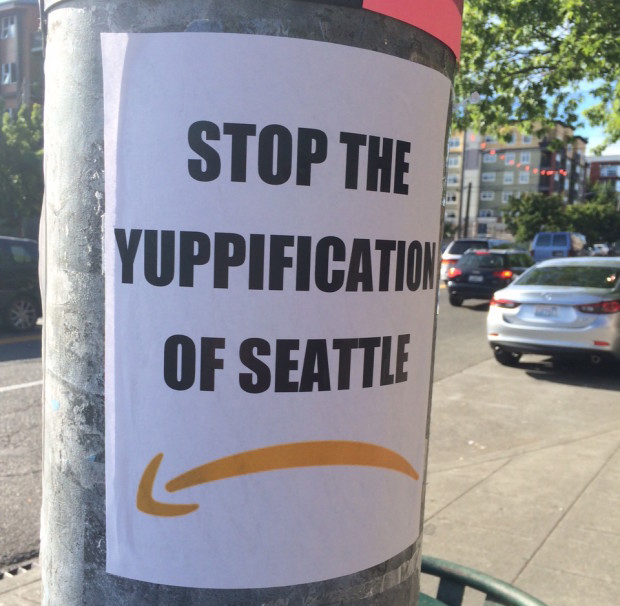 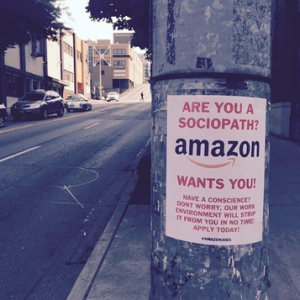 “Have a conscience? Don’t worry, our work environment will strip it from you in no time! Apply today! #AmazonJobs,” it said.

That flyer was part of the fallout from a harsh New York Times article criticizing Amazon’s workplace culture. Amazon exec Jay Carney disputed the credibility of the story and its sources.

Amazon’s rapid growth has become a lightning rod in Seattle as the city grapples with a rapidly increasing population, housing affordability issues, and transportation woes.

Although the message of the In-N-Out sign, the latest Amazon agitprop, is decidedly less pointed than previous statements, it also appears to be about Amazon’s influence in Seattle. Many have tried and failed to get the beloved fast food chain to expand outside of its core six states. If anyone could convince In-N-Out to move to Seattle, it would be Amazon.