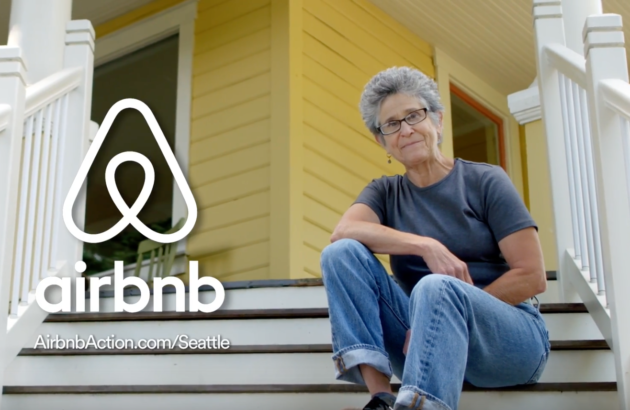 By September of an election year, anyone who still has cable is used to an onslaught of political ads sponsored by oil companies, environmental groups, activists, and, of course, candidates. But it’s not typically the approach tech companies use to push their agenda. That’s about to change in Seattle.

An ongoing skirmish between Airbnb and the City of Seattle over proposed home sharing restrictions has prompted the San Francisco-based company to take to the tube to get its message out.

In a series of television, radio, and web ads launching in the Seattle region today, Airbnb hosts share stories about how the service has positively impacted their lives. Seattle’s rising cost of living is a recurring theme and the majority of homeowners featured appear to rent out portions of their homes, rather than entire units.

Airbnb has been promoting this narrative since Seattle Councilmember Tim Burgess and Mayor Ed Murray first proposed regulating the nascent and lucrative short-term rental industry. They claim services like Airbnb and Expedia-owned HomeAway compel property owners to operate their units like hotels, removing long-term inventory from the market and adding to the city’s housing affordability woes.

The company says these “commercial” operators are a small minority of their users.

“We are working with the City of Seattle to find sensible regulations that allow middle class people to share their homes and make ends meet,” said an Airbnb spokesperson. “We want to ensure that policy makers and the community understand who Airbnb hosts are and get to know the everyday Seattleites this ordinance will affect.”

But if the hosts featured in the ads are just renting portions of their homes, the changes probably won’t apply to them.

As of the most recent revision, the proposal requires homeowners to live on the property they rent on Airbnb or HomeAway full-time. The ordinance would prohibit property owners from operating short-term rentals in buildings or units that they own, but don’t occupy.

Airbnb and HomeAway are in ongoing talks with the city and the proposed regulations are still in the open comment phase. A date to vote them into law has not yet been set.