Helping people to quit smoking can result in a huge benefit for employers.

Not only are users healthier and more productive when they stop smoking, but employers can also save big on healthcare costs associated with smoking.

A Seattle-based startup is looking to help users quit smoking with the power of an app.

2Morrow just raised $500,000 to help get its SmartQuit app, which uses research from The Fred Hutchinson Cancer Research Center, into more users hands.

SmartQuit uses “acceptance and commitment therapy,” or ACT, in which people are helped to accept their urges and let them pass. The app is based on research by Dr. Jonathan Bricker, who works in the Public Health Sciences Division at the Fred Hutch and led the first randomized, controlled trial comparing the effectiveness of smoking cessation apps. (Bricker was a guest on GeekWire Radio two years ago, and spoke about his unique approach to curbing people’s bad habits). 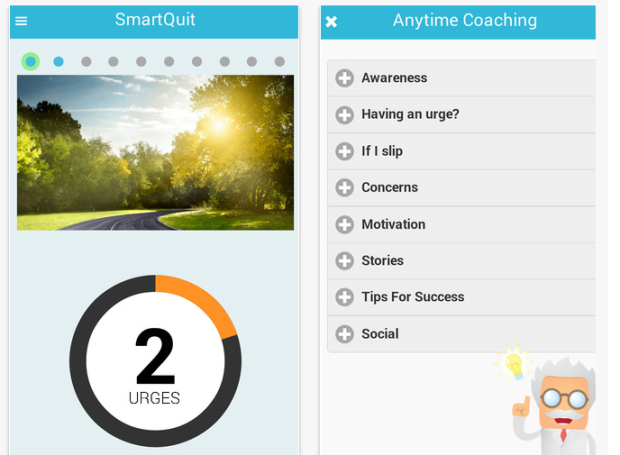 “There are tons of smoking cessation apps in the App Store, but those target the end user and many of them don’t have the clinical testing that Fred Hutch has provided,” said Krishnan Gopalan, an early investor in the startup.

Instead of going after end users, SmartQuit is aimed at states, health insurance providers and employers, who will pay for the app to reduce healthcare costs down the road. It is currently in use by the Washington state Department of Health to help residents stop smoking.

The app is available for free on iOS, Android and Windows Phone, but the full program is $50 for end users outside a health program. However, 2Morrow hopes companies and insurers will offer it for free as the app expands.

While this round of funding is focused on growing the app’s user base, 2Morrow also hopes to expand to high-cost healthcare issues like obesity. The company’s behavioral approach could help people break bad eating habits and establish stronger exercise patterns.

The company currently has eight employees. CEO Brandon Masterson said that funding will be used for promoting sales of the product.

“We are excited and grateful for the support from key angel groups in Seattle and Portland,” he said in a statement. “We will use this raise to accelerate sales that’s backed by a robust pipeline.”

The company previously raised $250,000 from the Life Sciences Discovery Fund in 2014, and the SmartQuit app was part of a $3.1 million trial looking at how the app effected users trying to quit smoking.